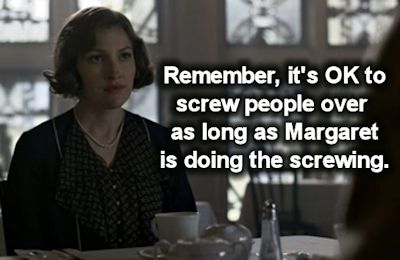 We’ve had a busy week, so make sure you refresh your memory and get last week’s recap so we can dive into this week’s episode full throttle!

This episode checked in with a lot of characters and plot lines, so hang on; it’s going to be a bumpy ride. You may want to take notes. Lucky Luciano checks in with Joe Masseria. Ol’ Joe is going to send him back to Florida to do business with Petrucelli, Nucky’s partner in the land deal– but that’s as simple as it gets.

Al Capone is running around unhinged, and murders a police officer in broad daylight in front of dozens of people. Torrio is not pleased when it makes the headlines. Al is convinced O’Banion was behind his brother’s execution, but Torrio still has business to do with O’Banion and won’t let Capone go buck wild. Later, O’Banion assures Torrio that he had nothing to do with Frank Capone’s ugly demise, and arranges to sell Torrio a brewery. O’Banion and Torrio go to the brewery to complete the paperwork, and the minute everything is signed, the cops burst in and arrest everyone– but Torrio is the only one who is going to be in trouble, because everything is in his name. O’Banion set him up! When they bail Torrio out, he gives them an order to kill O’Banion. Al and I will have our vengeance for him putting that guy’s eye out a couple of weeks ago!

Nucky and Eli debate whether Agent Knox’s handkerchief embroidered with someone else’s initials means anything, while Eli razzes Nucky about banging Sally. Nucky doesn’t have time for this and decides to have Gaston Means check Knox out. Means claims there is nothing to report. I bet Means will find plenty more to report when he finds out Roy Phillips has his stapler.

Speaking of Agent Knox, he’s having a long day. He’s got an informant. but Remus is one of those picky Summer’s Eve canoes who only refers to himself in the third person, and no breakfast can please him. He’s struggling to sell the idea of organized crime to J. Edgar Hoover so he can make a big bust. Knox has spent all season trying to get Hoover to support him in his effort to take down organized crime, and Hoover has not budged much– until Esther Randolph drops a hint to Hoover that it would score him points with the attorney general. At a dinner, Hoover takes sole credit for figuring out the criminal conspiracy, and Knox has to leave the room because he is so disgusted. Knox ends up taking an emotional dump on Means, who tries to tell him not to carry monogrammed handkerchiefs. Naturally, Knox isn’t listening. He’s angry, drunk and not taking good advice, so it’s only a matter of time before this guy blows his cover.

Margaret is back, working for a stockbroker. (Lawyers, land developers, stockbrokers… I’ll take people who have no souls for $500, Alex.) Little Miss High & Mighty Margaret is making her living by helping her stockbroker boss to con his customers out of cash. For one customer, she’s a wife who talked her husband out of getting in on a multi-million dollar deal– don’t miss out like she did! For another customer, maybe she *did* get in on the deal and this is her last day at work before she runs off to a fairy tale ending. She’ll say anything until the customer buys in, and her boss hands her the commission for the sale. She only flips out when one of her clients turns out to be Arnold Rothstein, but they work out a don’t ask, don’t tell arrangement beneficial to them both after he slips her a Benjamin.

If Margaret is supposed to be some kind of symbol for feminism, then sign me up for the He-Man Woman Haters Club. She is a PATHETIC HYPOCRITE. She let her first husband beat the crap out of her to the point of having a miscarriage. She married Nucky for his money, then gave it away when he trusted her with it. She stole money from the household fund rather than getting a job outside the home. She was perfectly willing to have another baby as long as a man would be around to provide for it, but the minute he was gone– BLAM, abortion time! She told Nucky that it mattered where the money came from, but stealing from client at the stockbroker’s is OK because nobody gets hurt. I hate her, I hate her hair, I hate her stupid judgmental brother, and I hope she drowns in a morality pit while Nucky collects a harem of girls at the Onyx Club.

Gillian and Roy Phillips are tiptoeing through the tulips in the wonderful fields of heroin withdrawal. They’re doing it the old-fashioned way– cold turkey with no ativan or methadone. I want to know what Roy is getting out of this. I’m not buying that Gillian is his soul mate or his one true love. We know that if Gillian ensnares him, she gets money, a stable, loving home and a fighting chance of getting Tommy back. What does Piggly Wiggly get besides a drug-addicted whore?? They made a big deal out of Ron Livingston joining the cast, and his character has hardly been in the show at all. Maybe they’re building up to something for the last episodes of the season, but so far it has been much ado about nothing. 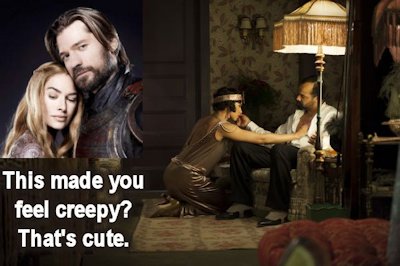 At the Onyx Club: Chalky wants to extend Daughter Maitland’s contract, because he hasn’t licked every flavor of cocktail syrup off of her stomach yet. Narcisse is not excited about Chalky’s pursuit of Daughter in 31 Flavors, BUT, he can arrange something if Chalky will help him establish a chapter of the Universal Negro Improvement Association. I’m assuming the UNIA is the group that meets later– or maybe it’s a church group, complaining about how heroin is ruining the community. They’re upset at Chalky because he is fraternizing with white people instead of dealing with this heroin problem. Dunn and Narcisse, who are causing the problem and getting rich, are here to save the day. Of course, when the deacon tells Dunn he is on to him, Dunn stabs and kills him. Chalky doesn’t care because he is working on those hot sex scenes and he’s lovin’ it. The audience is lovin’ it too, until Daughter launches into her backstory Game of Thrones style. Her mother was a prostitute murdered by her pimp. Later, we find out that pimp was Narcisse, who took her in and raised her, and they have the creepiest of creepy co-dependent relationships. That scene is SO uncomfortable and nasty! They don’t have to do anything gross for people to know it’s a sick relationship. EEWW, EEWW, EEWW.

Willie Thompson Part VI: The Search for Plot: If the writers just dump this storyline, I promise I will completely forget about it. I don’t know who is more annoying– Willie and his pseudo-guilt, or his girlfriend and her non-stop talk about morbid stuff. Let’s face it; neither of these idiots belongs in school, and after some morbid reading with Edgar Allen Poe, Willie is ready to admit that and withdraws from college. Back home, he announces in an artfully artless manner that he has left school to his inebriated father, who proceeds to pound the crap out of him. I could write a book about the family dynamics going on here, but I don’t want to, because I want to see gangsters, not milquetoast wannabes, but the writers insist that we spend valuable time on this awful story line. Eli decides to try beating Willie into submission, because that always works. When Willie escapes a fist pounding, Eli goes searching for him even drunker, because if a kid won’t go to college he must be violently coerced into it. Eventually Eli settles in at home, and Nucky lets Milquetoast Willie stay at the hotel with him for the night. Even more of Margaret would be better than this.

Check out the preview for next week’s episode, The Old Ship of Zion, and share your thoughts in the comments!