“I learned a long time ago not to take things personally.”

Episode 3 was not the climactic, gun-slinging finale of Act I we were expecting, rather, we take an even greater dive into the lives of our characters. Much like the previous episode, ‘Spaghetti and Coffee,’ we find ourselves sitting through a number of dialogue driven scenes, waiting to be rewarded for our patience. Episode 3, however, hooked me from the start.

Sure, we get a taste of the upcoming action, from Meyer Lansky’s NYC shootout to Gyp Rosetti’s farewell bar-b-que, but the most fascinating scenes take place within the mind of Nucky Thompson. We see first-hand how every decision Nucky has made has an outlying effect on everyone around him, going as far back as Episode 1 of the first Season. And from the look of things, Nucky’s problems are just beginning.

But lets take a step back, take a deep breath and reflect on how this episode has shaped Season 3 thus far.

Van Alden didn’t do much for me this week. It was interesting in Episode 1 to see how far he had fallen, but these scenes hardly add any depth to his story or character. There was a moment, when he was pleading his case at the shook down bar, where I thought the ole’ renegade was about to come out .. but no, after a clever build up of tension, the scene falls flat, and Van Alden once again escapes the clutch of justice. I’d say the shining moment for Van Alden is getting a handy from his sexy Sweedish wife, Sigrid – seeing her naked for the first time was a real treat. 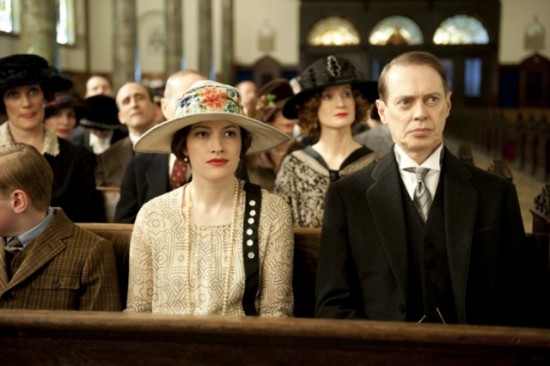 I’ve been increasingly frustrated with Margaret over the course of this season, not necessarily because she’s a bad person, but because I felt as though she had lost her fiery, Irish persona. Much like Dr. Mason’s initial thoughts, I felt she was intent on doing good, but didn’t have the balls to go out and make the necessary changes. Her actions this past Sunday proved me very wrong. Margaret cleverly out-foxes Dr. Landau in the presence of the Bishop, instituting a green light for the pre-natal ward at St. Theresa’s Hospital. It’s interesting – Margaret may seem noble and righteous, but her true power lies in her uncanny ability to manipulate others. Do the ends justify the means? You decide for yourself, but I have a feeling that her not-so-noble gift will land her in a heap of trouble as the season continues.

It’s always good to see Richard Harrow on the screen, I find him to be one of the most compelling, interesting and bad-ass characters on the ‘Boardwalk.’ His role in Episode 3, however, seemed rather forced and unwarranted. Richard hears a rumor from a delivery boy that Mickey Doyle is taking credit for putting down Manny Horvitz, which, off course, did not happen. In response, Richard posts up in Mickey’s house like a straight creeper and brings him to Nucky’s feet at the Ritz. Rather than blowing his head off, Richard releases Mickey and confesses to Nucky that it was in fact he who blasted Manny .. and that’s pretty much it, the two are square. I suppose this truce will have everlasting effects as the season continues, but for now, I’m unsatisfied, I’m sure many of you are as well.

Gyp Rosetti absolutely shined this past Episode, displaying a small sampling of each of his many personalities. We see the reasonable business man as he cuts a deal with Nucky, the prying gossiper as he shares intimate time with Gillian Darmody, the highly-sensitive bootlegger as he departs from Atlantic City, and lastly, the psychopathic murderer as he torches Sheriff Victor Sickles. “What the fuck is life if it’s not personal!” We’ve hardly scratched the surface of this complex character, but it’s obvious that at any instance Gyp is capable of exchanging one face for another. I’m not sure if his pyro-antics are reason enough to go to war, but he’s made it perfectly clear that this is merely the beginning.

At last, we tap into the mind of Nucky Thompson, revealing his haunting visions and exposing his true addictive nature. For the first time this season, we see the aftermath of Nucky’s dwindling conscience – a series of twisted dreams and hallucinations, pushing Nucky ever closer to the edge of a complete mental breakdown. He can’t sleep, everywhere he looks he sees the face of his murdered, surrogate son – Jimmy. The dream sequence is nothing new, we’ve seen these sorts of scenes from past Seasons, but now more than ever these dreams are having serious repercussions on the psyche of our protagonist. Nucky’s inability to vent only increases the pain, it would appear his only escape can be found in the comfort of his Broadway mistress, Billie Kent, whose glamourous lifestyle hardly fits that of a comforting shoulder to cry on. In a way, she is his addiction – Nucky’s inability to speak with her throughout the episode brings about flashes of panicky withdrawal – a junky in need of a fix.

Nucky has always had a vast disconnect with people, believing that a monetary arrangement outstrips any notion of respect or decency. It’s always been his greatest flaw, assuming that all is well and good for the right price. This line of thinking did not sit well with Jimmy Darmody, and it certainly does not sit well with Gyp Rosetti. It would appear that, once again, Nucky’s inability to learn from past mistakes has led him to even greater conflict.

I’m sure of it now, Episode 4 will be the catalyst to end Act I. Be prepared.