I had some pretty high hopes for “I Found You”, mostly because I thought the episode was going to focus on Pam’s journey to find Eric. Unfortunately, I was given a very different kind of scene with our favorite blonde Viking. 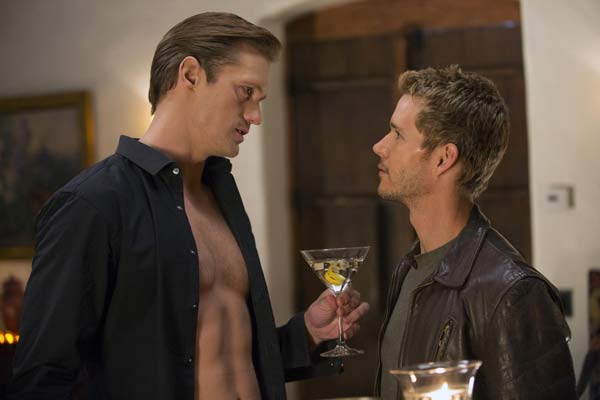 I touched on the idea last episode that True Blood was grasping at straws with the sex scenes lately, as if they have some nonexistent quota that they’re required to meet to keep their title as one of the cutting edge, sexiest shows on the air. And while I’ve always appreciated the way the show doesn’t hesitate to explore same sex relationships and gives them the same attention they do the heterosexual ones, the dream scene with Eric and Jason just left me rolling my eyes.

Though, I have to admit, most of the sexy vampire blood dreams have that kind of reaction from me. They just have a level of disbelief to them (not because of who is participating but because of the dialogue within them) that makes them completely uninteresting.

We finally put some faces to the Hep-V vampires that are going around causing chaos. Thus far, they’ve been categorized as rabid animals with no humanity left. The residents of Bon Temps assume that they are primal, need driven monsters but the reality is that they’re actually pretty organized. They’ve developed a hierarchy, with a leader, and a plan for survival, which will ultimately lead to a much bigger challenge than we initially expected!

I loved seeing Arlene step out of her fear and take charge of the situation, something we don’t get to see from her character a lot. She’s always been fairly docile and terrified of the supernatural, something I never really held against her because it’s pretty natural. Since Terry’s death, I think we’re seeing a new side of her. His death has given her an inner-power than didn’t exist previously and I’m pretty thrilled about it. 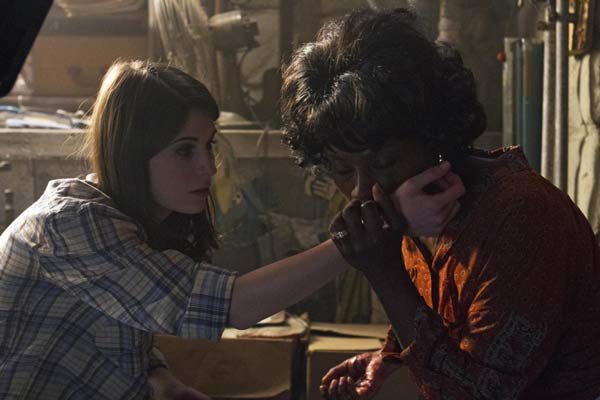 Tara’s mother is one of those characters that I have been anxiously counting down the moments until she dies. There’s just something about her that has always grated on me and it probably had a lot to do with the way she treated Tara. Lafeyette standing up to her and calling her out on just how deep her level of crazy goes was definitely one of the only highlights of the episode for me.

Lettie May falling back into her addiction, this time with vampire blood, as a way to remain close to Tara isn’t an unsurprising twist. Though the scene with Tara on the cross with a snake around her neck speaking in tongues was slightly disturbing. It had a uncanny similarity to the stuff we saw back when Mary-Ann was roaming Bon Temps (a season I would gladly strike from my memory).

“And that dog turned into our Mayor.”

Because we all know that mass panic is exactly the best course of action when the world is ending around you, the small group of humans resisting has become a large group of humans armed with broken shovels and machine guns. I’ve never been quite as annoyed by a group of characters as I am by the team of misfits that seems to have banded together to uproot the town hierarchy. In all reality, I wish they had started developing the story line long before this point. If they’d introduced a resistance to the vampires within Bon Temps (and not so much on a global level), it would have had a lot more impact to see them rise up now. It should make for an interesting scene when Sam and company return to town and realize they’ve been overtaken. 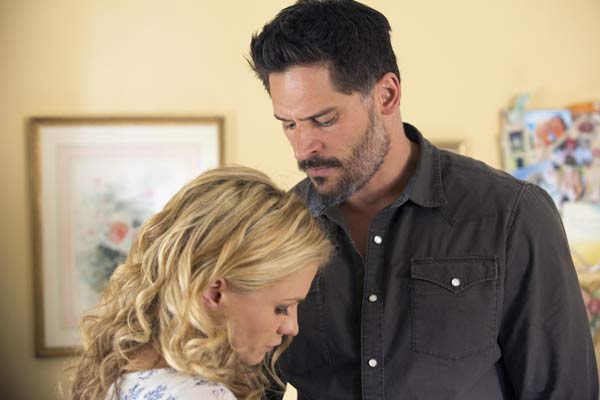 The episode seemed to take a very “Walking Dead”-esque tone. Especially when they focused on all the graffiti littering the town and the lack of living people. The big hole full of dead bodies only further solidified this theory. I’m pretty sure the writers directly took inspiration from the Zombie apocalypse genre and it didn’t hold my attention for very long. Perhaps it was Jason chomping on four-day-old pizza or Sookie’s dramatic reading of the dead girl’s diary (whose story was just a little too similar to her own to actually be an unique plotline) that caused me to tune out, but the end result was the same.

I had such high hopes that this last season would get us back to the brilliance that first helped me fall in love with the show. I caught small glimpses of it last episode, but this one fell pretty flat for me. The only slightly redeeming scene was the very last moment where they reveal that Eric has been infected with Hep-V.

This twist might just be the thing that helps bring the series back to it’s initial roots, as s show about the supernatural and not necessarily about the romance between humans and the supernatural. I’m sure the masses are ready to riot over Eric’s potential demise and under normal circumstances I’d be right there with you- if it wasn’t for Pam. I’ve never seen such a devoted character and I don’t doubt for a second that if there’s anyone who can find a cure or a way to stop this, it’s her.

What did you think of the episode? Check out the preview for next week below!