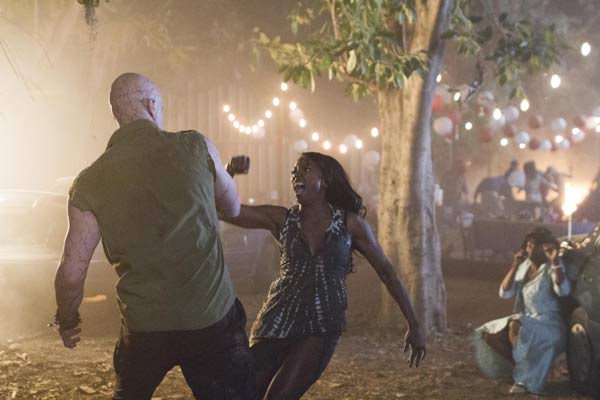 The hashtag taking over the Internet #Truetotheend is definitely valid as we go into the final season of True Blood. For some of us, our love for this show was instantaneous. For others, it took a while for it to develop. For most, the love changed and morphed as the show developed and changed throughout the different seasons. Regardless of those changes, if you’re like me, you always come back for more.

We last left Bon Temps with the entire world going into chaos after the True Blood supply was completely contaminated and Hep-V is spreading rapidly through the community. The season finale brought us into the future, showing us that a new policy of each vampire being assigned a human to nourish them and keep them from catching the fatal disease in return for the vampire’s protection against the “Hep-V” vamps.

“It’s not safe, every human needs a vampire.” 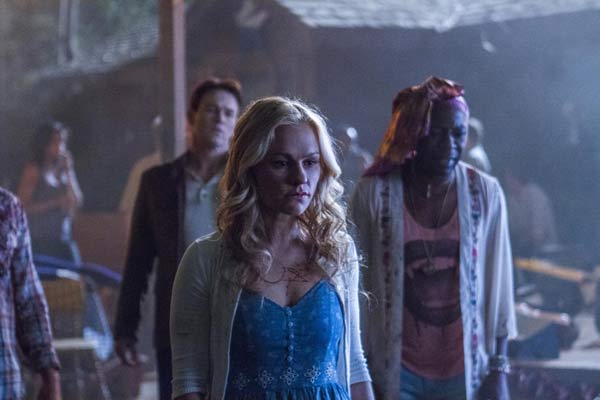 The premiere begins exactly where we left off, with an epic battle between the infected vampires waging with the townsfolk of Bon Temps. No one is safe during the epic blood battle, despite the attempts of the few vampires who genuinely care in the town. The one part about this scene that intrigues me is the way when a whistle blows, all the Hep-V vamps retreat, which indicates that there might be someone controlling their chaos.

We see our first casualty of the season as Tara, which I found myself devastated by. Tara was one of those characters that I hated as a human but grew to love as a vampire. Her character development constantly astounded me throughout the series and Rutina Wesley did such a brilliant job bringing her to life.

We even got to experience the rest of the characters and the way her death affected them; though I was hoping for just a little more of an impact. Even if it was just a moment, all of us who felt for Tara for her endless crush on Jason, got some level of satisfaction his brief mourning for his sister’s best friend.

After Tara’s death, Sookie finally begins to crumble, something I always love to see happen. It gives her a realistic side that we so rarely see. Though, with the amount of times this girl has almost gotten her throat ripped out for her drug-like blood, you’d think she’d have learned not to wander aimlessly thought the woods by herself. I always viewed Tara as the anchoring presence for Sookie and I’m interested to see exactly what happens to our little Faerie without her best friend.

“I’ll be having a three-way with the Devil.”

Pam’s search for Eric leads her to Morocco, where she participates in a game of Russian Routlette against another vampire to gather information. Despite the situation, and her possible demise, she maintains her casual flawlessness that has solidified her as one of the best characters on the show. The scene also gives an interesting look into exactly what Pam has faith in. She does not believe in an all powerful diety that protects her and watches out of her, she believes in her own strength and most of all, she believes in Eric. Her maker is by far the most important and pivotal thing her life. So much so, that we did not even see a scene where she mourns the death of her progeny and former lover, though as a maker she definitely felt it. 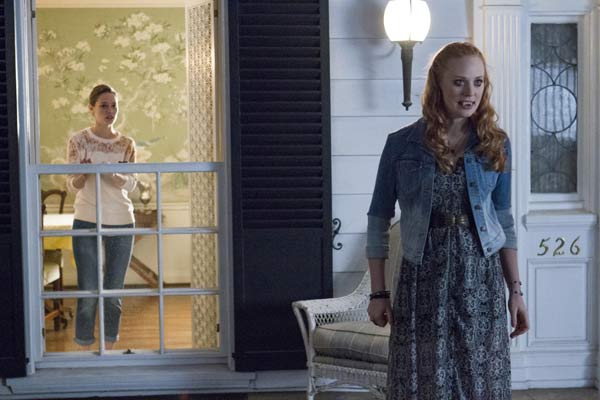 Jess is the only vampire who has actively sought for redemption for her actions without the motive of wanting into Sookie Stackhouse’s pants. Her vow to protect the Bellfleur’s in a way to make up for her murder of the young fae girls was something I was pleasantly surprised by. I’m also really excited by her blossoming friendship with Adilyn because it is something both girls seem to desperately need. Jess has been isolated as the youngest vampire in the town and Adilyn has been isolated by her father’s protection. Though the circumstances might seem odd, it seems like almost every great friendship in the show begins with one of them trying to kill the other.

Her vow of protection extends to the point where she’s willing to burn to protect the faerie and to give her own life to save the girl she almost killed. Once Adilyn invites her in, Jessica fights the urge to feed from her, which appears to be one of the most difficult things she’s done since the shows premiere.

“I don’t feel nothing inside.”

Can we just talk about the perfection behind Lafyette? Because out of every single character on this show, he is the one who always managed to tug something inside me and keep me coming back, I don’t know if it’s that he’s so fabulous and confident with himself, or the fact that he’s the only character that seems willing to admit just how screwed up things really are and how it feels to be a human trapped in a world of supernatural chaos.

His conversation with James was definitely one of my favorite parts of the episode. It gave us a wonderful glimpse into the character we’re going to see much more of this season. Finding out that Jesse was actually a peace-loving hippie in his human life gives him a lot more depth than I initially believed he was going to have. When the character was first introduced last season, I was fairly bored by him and didn’t see much of a point. Since the actor has been changed to Nathan Parsons and we got to see more of him this episode, I’m a lot more excited about the direction he’ll take.

“You are crossing a line you can never come back from.” 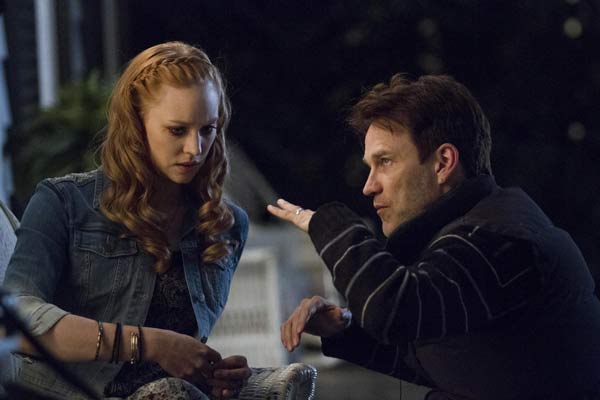 The horrifying scene of strung up, bled out bodies was probably the most revolting part of the episode, and just shows how twisted these Hep-V infected vampires are. Logically, you would think everyone would stick together to try and eliminate the looming threat but that wouldn’t be very realistic. We see the humans begin to rebel, challenging the leadership that’s taken hold of Bon Temps. More sides of the war are beginning to show their faces, and it’s completely unclear if anyone is going to make it out of this alive.

Bill willingly puts himself in danger to save Andy, proving just how far the vampires are willing to go to protect their humans and maybe seeking his own sort of redemption for leaving Jessica alone with the young faeries.. We see Andy turn the tables against his own kind to protect Bill in return, something one would have never guessed would happen after last season. I loved the scene in the car that follows where Andy makes sure Bill knows that he is in no way absolved from his actions and only of use to Andy to get Holly and Arlene back.

The way Andy has come into himself, developing from the awkward Deputy who wanted so desperately to prove himself to the strong-willed Sherriff who commands each room he steps into is an amazing thing to see.

“For better or for worse, nobody in this town knows vampires better than me.”

We see the whole town start to turn against Sookie, blaming her for the way the vampire situation has spun out of control as if one girl was that powerful. This plot line seems pretty ridiculous to me, as Sookie definitely isn’t the only person in Bon Temps who’s slept with a vampire or had a relationship with one. In fact, almost every person in the town had come to accept Bill Compton as one of their own before this all happened. My thought process with this plot line is that the writers are attempting to show the lack of logic involved in mass hysteria, and how one demograph of people often gets pinpointed as the cause of problem despite their innocence. While I understand the frame work, I wish the execution had been better.

Finally, we get to experience Sookie finally standing up for herself against the thoughts people are too cowardly to say out loud- something I know I’ve been waiting for since season one. I wish she’d focused more on telling them to shove it than offering her help but I guess that wouldn’t have gone over to well.

I’m interested to see what direction the rest of the season will take because I think there’s a bunch of different ways it can go. My hope is that they will continue to focus on the supernatural aspects, instead of getting lost in the romance like past seasons. True Blood has earned it’s title a very sexy, very steamy show but the few sexual scenes in this episode seemed so forced as if they can’t imagine not having at least one naked girl in an episode. When those scenes aid the actual plot. I adore them, but when they’re just thrown in for the shock value it seems more than a little overdone.

I desperately want this final season, our last taste of Bon Temps and the characters we love, to return to it’s roots as a show that is first and foremost about vampires and the way they affect the humans around them and can only hope that’s what the rest of the season holds.

What did you think of the premiere and what are your hopes for the rest of the season? Check out preview below and leave any thoughts in the comments!