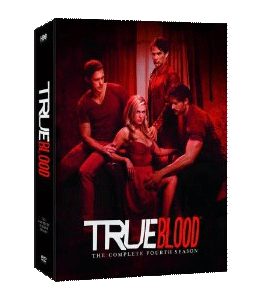 No matter what you thought of Season 4 of True Blood, HBO is making sure that you have everything you can ever want in a box set.  On Tuesday, May 29th, HBO is releasing the Season 4 box set of True Blood that will include Blu-ray, DVD and digital editions of the season all in one!  So take your pick!  Season 4 of True Blood may not be the best of the series, but it is a season filled with story lines that change the direction of a whole gamut of characters, that will affect the series as a whole.  A lot is on the line for the series and HBO is taking a no holds barred approach to keeping fans wanting more.  Included in the box set is a whole bunch of special features that will sure keep fans occupied until Season 5 begins a few weeks later…

This is what fans can expect from the 3 in 1 box set:

BLU-RAY FEATURES (ALONG WITH ALL DVD EXTRAS):