As it turns out, the finale ended up being almost exactly what I thought it would. It was a big, giant messy episode, right down to the double digit vamp liquidations that littered the hour. That’s not to say that there weren’t some genuinely fun moments, and moments that made me go OHMYGAW; there were plenty of those too. 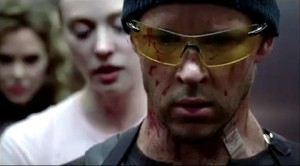 The episode picks up right where it left off, with Russell about to go head to head with a realm full of fairies. He seems invincible and then BOOM Eric finally, FINALLY stakes that motherfucker. It happened so fast that I almost didn’t believe it really happened. I applaud True Blood for actually making that decision; I know it wasn’t easy finally deciding to get rid of the best villain they’re ever going to have. So in less than a minute Russell melts away with one stake to the heart and one disappointed, “Fuck!” From there Eric, Nora, Tara, Jason (with a severe mental ailment–more on that later), and Sookie decide to storm the castle. Eric convinces Sookie that she may be the only one who can bring Bill back from the edge, because of course he does. And of course Sookie agrees. But here we encounter a new, bizarre plot point: Jason, fresh from his bump on the head from fairy microwave fingers, can now see his dead parents. Not only that, but his parents are no longer the loving, gentle parents we’ve seen in the past. This time around they’re angry, bitter, hateful vampire haters. This of course works well to give Jason a new mission as Mr. I Hate All Vampires Forever Now, so I guess this is going to be his thing now? If he’s not careful he’ll be relegated to some shit story like Alcide or Hoyt and then we’ll be wishing he were just dead already.

So the gang gets to the compound and the fun really begins. Seriously, there was so much vampire goo in this episode I would have hated to have been on the cleaning crew for them. So they break in, break ranks, and begin an all out bloody assault on the Authority, who still sucks at life and they all die. After rescuing Pam & Jessica, Eric and Sookie go off in search of Bill, who has already staked Salome after tricking her into drinking poisoned blood. Sookie and Eric plead & beg him to regain his humanity, but to no avail. Bill downs the blood of Lilith and subsequently EXPLODES. There’s a split second where you think he might actually be gone, that this was Lilith’s plan all along. But then up from the goo rises Billith, a bizarre Bill/Lilith combination; he’s finally become the monster this whole season was leading him to be. It’s here that we are left with the knowledge that Bill is now the Big Bad for season 6. I will say that I’m surprised at myself for actually thinking Bill as a villain might be a good thing. He’d become so emo and boring as of late, and I’d rather him be completely off his rocker insane than a yuppy, religious fanatic. Not to mention the natural foil he is to Sookie and Eric. This might be good people. (He’s no Russell, but I think he has the potential to be quite nasty.) 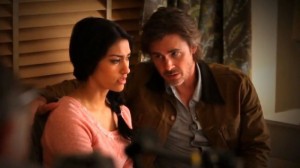 Meanwhile, Sam & Luna are really showing off all their Shifter powers and are still hard at work trying to rescue Emma. After barely escaping Bill by doing my favorite trick of his and turning into a fly, Sam devises a plan that has Luna shifting into Steve Newlin. It goes awry, as it so often does, and she shifts back on national television, just as Sam does the COOLEST thing he’s ever done and shifts from a fly to a person INSIDE that bitch Rosalyn, killing her from the inside out. It was amazingly ridiculous, and I loved it.

The rest of the gang is headed up to a rendezvous point while Sookie and Eric try to save Bill. Jason spurns Jessica’s proclamation of love, and Pam and Tara announce theirs for each other with a full on makeout session. I know Tara can still be annoying, but Tara the Vampire and the relationship between her and Pam has been a real highlight of this season. They work really well off each other and I think that’s the one storyline that the writer’s got right this season.

While all of this is going on, the rest of the residents that we are supposed to care about (plus Jane Bodehouse for some reason) are at Merlotte’s as Maurella has 4 half-fae babies. That whole scene was just RIDICULOUS. Maurella’s birhing scene was practically comical, and not in a good way. What will come of the babies, Andy, and Holly I don’t know and I don’t really care. 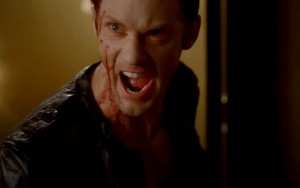 Oh yeah, Alcide and his dad were in this episode too, in their typically uninteresting storyline. Alcide took V (shame on you dad) so he could beat JD, and now he’s packmaster. Okay? What does that do for us? This plot isn’t even trying to be tied in with everything else going on in the show, and as such seems beyond pointless. Like I said last week, I would hate it if Alcide wasn’t on the show, but he’s growing more and more pointless with each passing week. The writers need to figure out a way to interestingly weave together the were & vamp communities, stat.

So we’re left with Sookie & Eric running from Billith; Jason, Jessica Tara & Pam, and Nora headed for an escape; Sam & Luna with Emma but seemingly stuck as Luna passed out right after she shifted back; Alcide as packmaster; and Andy the proud new papa of 4 half-fae daughters. Got it?

I’d like to address the writers with a few final thoughts I have regarding some of this season’s problem areas: So this whole season the Authority was a bit of a disappointment. It was never really as interesting as I think the writer’s thought it would be, and it never truly yielded any amazing storylines directly. That being said, with the entire Authority wiped out in one episode, I think we might be getting somewhere. It’s no secret I though the slloooooowww build that was Roman vs. the Sanguinist movement wasn’t good. But after he was offed and the crazy went up a notch, things got a bit better. But then Bill became the slow burn. He slowly devolved from a mostly uninteresting character to what is obviously the new Big Bad ( Big Bad Billith, if you will). Now, I’m actually somewhat looking forward to what kind of havoc he might wreak next season, and how it will affect Sookie and Eric. Basically I just wish they hadn’t wasted so much time talking about what the Authority was like, could do, was about, and would have just gotten down to business faster. For future reference writers, a big room full of people talking week after week is hardly ever interested.

re: Alcide–
Just figure it out. There are ways the two groups can be be successfully intertwined, so I know you writers can figure it out. Alcide’s a good character, but without a reason or any kind of stakes keeping him rooted in the world of Sookie and the vamps renders  him useless. And a world where Joe Manganiello in flannel is useless is a sad one indeed.

re: Hoyt–
Thank  you for finally putting him out of his misery. You bid him adieu in such a touching way that I almost can’t even be sad he’s gone.

re: Lafayette’s inner brujo–
I do hope that after his dalliances in Mexico you’ve decided that this brujo bullshit is just that. Lafayette made a triumphant return to his old, sassy self, and it was SO welcome. He’s the best when he’s the voice of bitchiness & comedic relief. He can still be a valuable character on the show, just remember how to use him best.

re: the Ifrit storyline
I don’t want to talk about it but NEVER AGAIN.

re: the mask-wearing hate group
I know a lot of people seem to really hate that this storyline existed, but I disagree. Do I think that it didn’t belong in this season? Yes. I think had it been given the same kind of focus and attention as the Rene storyline from season 1, I think it could have been great. True Blood is at its best when it’s 1 part campy + 1 part mystery + 1 part supernatural. It’s simple with room to grow more complicated, but it’s not the deluge of crazy shit that was this season. It just got lost in the shuffle with everything else that was going on. That was really my biggest qualm with this whole season–that they just had too much going on. When you’ve got source material as rich as this, you really don’t have to try this hard to have a crazy, fucked up, insanely fun TV show. My hope is that next season they take it back a notch, volume wise. I would never ask that True Blood tone it down crazy-wise, but I hope they realize that 1-2 major storylines will do just fine. And each one can get the attention it deserves.