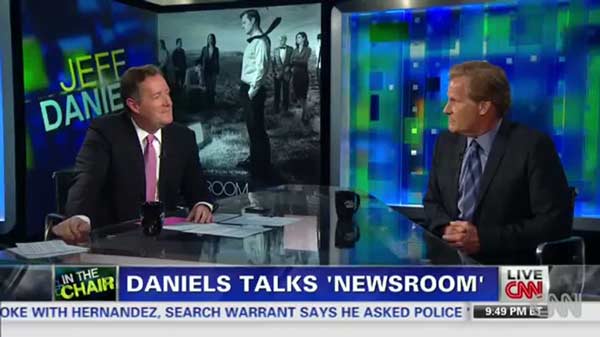 It’s often said that art imitates real life. But in the case of CNN’s Piers Morgan and The Newsroom’s Will McAvoy it seems that reality is taking notes from Aaron Sorkin’s HBO project.

In an interview with The Guardian Mr. Morgan said:

“Watching the first episode of Aaron Sorkin’s The Newsroom was the trigger point. Jeff Daniels’ character is bored in his job, ticking time, hasn’t got a clear voice, then he suddenly explodes about the state of America, and it transforms his show.
“I said to my producer it was really interesting because you can see the awakening of a passion and a voice. It made me think: what do I feel really strongly about, and it was guns. It all bubbled up very naturally.”

In case you’ve somehow missed it here is the speech Piers was referring to:

Sorkin no doubt took cues from programs such as Piers’ so I’m betting the inspiration was mutual. HBO programming has a way of striking chords with people in ways that regular television often doesn’t. Has an HBO show inspired you in such a profound way? Leave us a comment below and share your story.