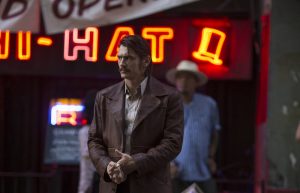 This episode focuses on four characters, their struggles, frustrations and insecurities with the daily goings on in their lives. Vincent (James Franco), Lori (Emily Meade), Candy (Maggie Gyllenhaal) and Abby (Margarita Levieva) are all shown in a state of malaise and wanting more from their lives. Don’t we all want to achieve personal and professional satisfaction at some point?

Ruby and Candy take a little trip to watch a seedy adult short movie being filmed. What’s even more startling is how quick they are at realizing that the filmmaker in question is pulling a con job. He’s in it to make a fast buck, charging voyeurs a fee to watch his ‘supposed’ movie BUT there’s no actual filming taking place. Only the illusion of the camera and film equipment set up leads people to believe that a film is 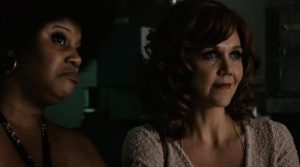 being shot. Nope, not happening. In watching this scene, you come to realize that yet again that Candy wants more from her life than just hooking for men and a life of drudgery on the streets. She’s pretty keen and wants to learn about the adult movie industry, whether it’s in front of the camera or behind it. Candy is trying the best she can, sending money to her mother and son, trying to visit when possible and trying to pay her bills. Life as a prostitute – especially a freelance one – is not easy.

New prostitute Lori is having a difficult time bringing in money and trying to find her stride. She has her pimp, CC – who quite frankly puts all sorts of stupid nonsense in her head – but she’s not getting regular customers to secure a steady flow of cash her way. Let’s face it, when you are a prostitute, you are vulnerable in so many ways: life on the streets is difficult, fraught with fear, tension, violence, police arrests, sexually transmitted diseases and beatings at the hand of violent, controlling pimps. You can only stay on the streets for so long and a lot of women turn to prostitution as a means of trying to control their own lives, especially if they have left a life of physical or sexual abuse. 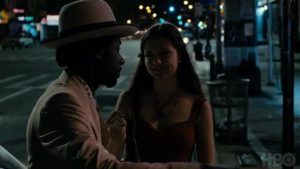 But prostitution is not a career for the glamorous. Very few manage to break out of the trade and move on up – and by moving up, either they get into modeling, or acting in soap operas or movies. You have to have a head for business and connections. Some of these women, it seems, are destined for the streets, while others are trying to desperately carve out another path for themselves.

Abby, the attractive university student, is down on her luck. Choosing not to go back to her post-secondary studies, she ends up in temp job after temp job and is completely bored by it all. After having a one night stand with a former colleague, she realizes that she’s been robbed of her money and just moves right along, not getting upset, but just being factual about the whole thing. Now, when we saw Abby and Vinnie meet in the pilot, we knew that these two were going to cross paths again. Vinnie ends up being able to provide Abby with a waitressing job at his new bar and she ends up doing pretty well, bringing in tips and beginning to learn the bar scene through Vinnie. Dare I say that there is a simmering attraction underneath the surface? In an HBO interview her is some thoughts from Levieva on her character:

HBO: How are Abby’s sexual experiences different from the other women in the show? 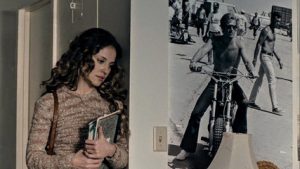 David and George said, “We need to see Abby in these sexual situations because Abby is the only woman on the show who really gets to have sex on her own volition. She’s not getting paid for it; she’s the voice of the young women who are sexually free; who haven’t yet encountered the period in our history where STDs are such a huge thing. What did 1971 look like for a liberated young woman who feels free and curious to explore?” Once we had that conversation, I had no problem being nude or being involved in those specific situations because we’re telling that story.

HBO: Abby carries herself with such confidence; does Episode 3 knock her down a peg?

MARGARITA LEVIEVA: Part of the reason Abby has such confidence is she comes from a home where everything has been provided; she was cocooned in a cushy upbringing. But a lot of it also truly comes from her brain. She knows she’s smart and capable, and she’s determined not to take any more help from her parents.

The reason I like Episode 3 is because of that turn from, “Things will go my way” to when her money is stolen, and she ends up going to Vincent’s bar. In the end, after being so outraged about the idea of being one of those girls wearing leotards, the desperation and the need to survive kicks in for her in a way it hasn’t before. 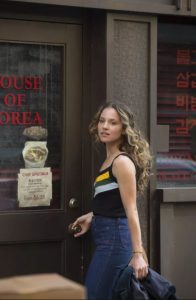 HBO: What does Abby think of Vincent?

MARGARITA LEVIEVA: She’s really attracted to Vincent in a human way because he’s unlike anyone she’s been around. Most of the men she grew up with, especially in her environment, her home, were very uptight and they all do the right thing, have similar jobs and aim for similar goals — providing for the family, having the house, having the wife at home. Vincent is this regular guy who’s so earnest and sincere and doesn’t try to be anything other than what he is. That’s really refreshing to Abby. He’s just kind of a straight-up guy. And obviously, he’s not hard on the eyes.

Twins Vinnie and Frankie have charm, charisma and an ease with people from all walks of life. Trouble is that Frankie is a bit of a hothead – smashing in cigarette and pinball machines do not endear him to the silent partners of their new bar venture, called Hi-Hat. Not to worry – Vinnie has some muscle behind him in the form of mobster Rudy Pipilo (Michael Rispoli) – and any misunderstandings that took place with Irish mobsters sure get cleared up fast. A family crisis – the twins’ brother-in-law, Bobby Dwyer (Chris Bauer) has what looks to be a heart attack. Here, the Martino boys show how much they take care of their sister and her kids. Vinnie gives her a thick wad of cash in order to help her out cause it looks like Bobby is going to be out of commission for a while. All is good because, for Vinnie with his new bar opening up and customers coming in, especially the local pimps and prostitutes, business seems to be starting off on a positive note.

One surprising encounter is how a man named Big Mike (Mustafa Shakir) first makes an appearance on the streets while Candy was out working them and again a second time when Mike comes to the rescue of Vinnie at Hi-Hat. I have a feeling we haven’t seen the last of him, but who is he? I also hope that Candy does additional research into the pornography business because quite frankly, I like the idea of a woman being able to take control and be all business-like in a shady business that is run by men, with the sole role for pleasuring men and if a woman can have the initiative to want a piece of the action, then I am all for it.

Now here is the Behind the Scenes clip followed by next week’s Teaser.