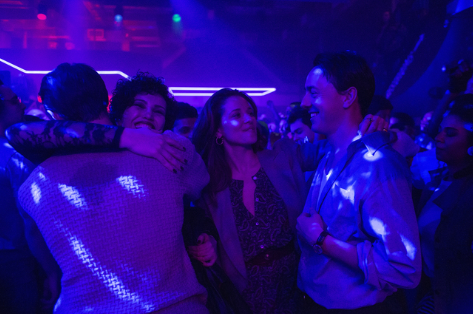 What is normal? Who says what normal is and isn’t? I’m fairly certain that at any given time, many people have asked themselves, “Am I normal? Do I want to be normal? Is normal boring?” Do our beleaguered folks who walk the beat of the Deuce long for normalcy? Or is it just a shattering illusion? 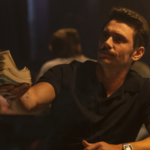 For starters, Joey seems to think that he’s running with the normal pack of Wall Street frat boys. I don’t think that’s the case; he’s just their flunky, who can procure them women and illicit drugs. He’ll never be on their level. Bobby has a lot more life experience to know that his son is just the pimp for the Wall Street boys and that he’ll never fit in. In one way, you have to hand it to Joey – he saw an opportunity to make money from his wealthy friends and to also give his dad a cut; so from a business point of view, it’s all about the cold, hard cash (a theme which fits really well with the greed and flash of the 80s). But Bobby knows that sooner or later, Joey’s fair-weather friends will find some other chump, should Joey not be able to deliver on the goods. 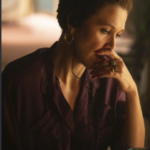 Eileen, though a film director in her own right, will never command the same level of respect that her male counterparts do and will always have trouble with getting financing for her vision of femme erotica and will always have to struggle. Even her relationship with Hank is having its share of problems. Eileen has become seriously estranged from her son, who has taken off from home and only calls when he needs something. This must hurt her parents because they don’t have any sort of relationship with their only living grandchild. Is that normal? (I don’t think so, but then again, family dynamics can be a very complicated, emotional and demanding thing) And what about Hank? Is he really a dirtbag? Will their romance flourish or flounder?

Lori’s newfound normal (being an adult entertainment actress) isn’t all that it’s cracked up to be. While I had high hopes for her (no more abuse, being taken advantage of, access to drugs and alcohol, bad health), it seems like she still has to scratch, claw and get peevish, in order to make sure that her health and well being on the set is being taken seriously. I know that the 1980s were a decade of excess and greed, but my God, with the scare of the AIDS virus lurking around, you’d think that the directors, casting crew and agents would want health and safety for their clients to be a number one priority. Not seeing to that is not normal. It’s just reckless and foolhardy. Interesting to see Lori show an interest in music – having some experience on a set for a music video was another side to the entertainment business that she never really considered. Maybe it’s not such a bad idea to diversify.

Frankie and Vincent each have their own respective version of normal (if you can call it that). Frankie is married, trying to produce, direct and distribute amateur adult films, while side hustling drugs to make more cash while raising his two sons. Vincent is still having his open relationship with Abbey, although it appears to have come to a stalemate. However, I think that it’s become normal and complacent for them both and there’s a sort of safety in that. Better the devil you know, then the one you don’t. Abbey, for her part, is still looking for causes to support and throw her weight/influence (not to mention Vincent’s money) into. She finds herself quite intrigued by an artist.

Alston is still digging in deep to find out who’s purchasing expensive tracts of real estate and how can they go about legally trying to uncover their identity. When a person is up against wealthy landowners unless you have unlimited finances, you can’t do much and you’re going to run in circles.

The three people that I was most interested in this episode was Rudy, Paul and surprisingly, Melissa. Paul’s partner, Todd, is very sick and isn’t in any shape to be taking on artistic projects that could very well bring him the fame, accolade and fortune he deserves. It’s sad; it makes one think of how fleeting life can be. It 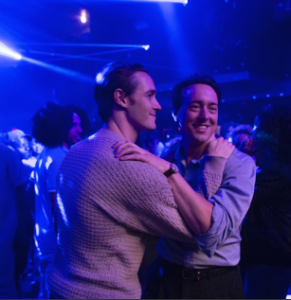 always takes sickness, death or loneliness to truly appreciate what a person has in front of them. I wonder if Paul is worried about his own health…it could be years before he starts to show any sort of symptoms. He states he’s careful but who really knows? And aren’t the higher-end real estate deals just another form of corruption? It’s classism – these developers want people with money coming in – which means anyone who is from a lower social-economic background – are totally left out in the cold. Which brings me to Goldman. I shudder to think what’s going to happen to him down the line. He’s all about helping Detective Alston and trying to clean up the Deuce, in favor of more respectable, higher-end buildings, residences and populace. Will Goldman end up getting AIDS? Will he come clean to his wife? Rudy…as much as he wants things to stay the same, they’re changing. Whether it’s the new mafia families on the go (Gotti), or his businesses losing money, Rudy can’t seem to command the power and respect he deserves (and has been waiting for).

Melissa – a former street worker turned adult film star – is the character that really surprised me. Having to deal with her father showing up, and all the pent-up emotion from years gone by – seeing her sitting on one side of a door and her father 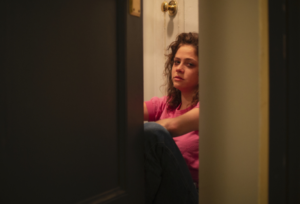 (played by David Morse who was raw) was touchy, overwhelming and frustrating. We never really knew her back story. When her dad comes back into her life, we almost expect tears, screaming matches and possible violence to accompany the storyline. Instead, we see sadness, forgiveness and a willingness to move forward. That can’t be easy; anyone who has ever dealt with trauma (an alcoholic parent; having a relationship break apart; a family member dying; being a survivor of abuse) goes through a series of grieving stages. Not everyone has a chance to have a cathartic release and truly have closure. It seemed like Melissa was able to and given that her father wasn’t harshly judgmental, I’d say that these two were on a road to some sort of redemption. These things don’t happen overnight, and really, when does life ever really feel normal? Without its’ ups and downs, sickness, death and lows, we wouldn’t be able to appreciate the good times, when things are static and there’s nothing to worry about.

When it comes to the folks at the Deuce, will ‘normal’ ever be a part of their daily lives?

Here is the ‘Inside the Episode’ clip and a look ahead to next week.