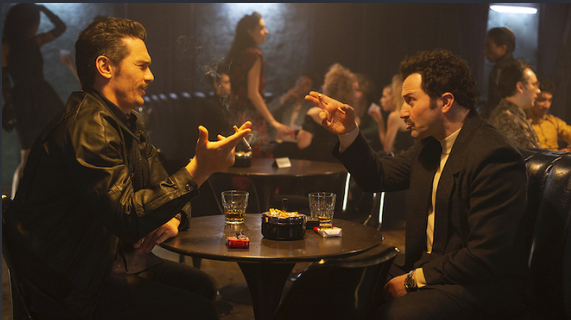 If you come from an Italian background, then you know that the phrase used for the title of this The Deuce episode can be one of sarcasm or one of reality. It roughly translates to “dying of hunger” or “the death of hunger” – and in this episode, I can understand why it was used as the title. Either you’re starving in every sense of the word or it’s a sarcastic play on words.

Eileen continues to be at odds with Harvey – artistically and personally. She’s fed up with how sleazy the adult film industry has become. Where is the perspective, the third person point of view, the first-person point of view, any view other than the money shot? Where is the storyline? It’s all about the cheap thrill and profit margin. So, Eileen tries a different tactic: how about telling the stories of the women who have gone from the streets to the movie screen? What were their lives like? How did their experiences influence them to go from one industry to another? Did the quality of their lives improve? These are the kinds of stories that will make for some compelling films and Eileen is going to make them, with or without Harvey’s funding and support. I am down with that. You go, girl. 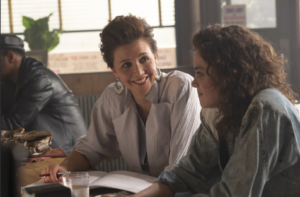 A very funny and surprising trend was how the introduction of the VHS and Beta technology allowed for greater privacy and extra leisure time, in the comfort of your own home. Frankie soon learns that people like to take on the camera and make their own private movies. Frankie has a few business deals going down – and when business is good, it’s booming. He meets with regular people who make their own movies and are happy to put them into production. Frankie also meets with another distributor, in the hopes of making boatloads of cash, while helping regular people out with home adult entertainment. But that’s Frankie: he’s always looking for a quick fix and a fast buck. And the disgusting thing is that Mob boss Rudy P has to point out to Frankie: for all of his ‘success’ – in his viewing parlor, there’s a heinous discovery to be made and that is that some of the business guys Frankie deals with insert child pornography into the adult films. Rudy is furious, disgusted and wants to scare Frankie into taking heed of that fact. Damn right, Rudy, do your thing.

Business for some of our Deuce folks looks promising and yet there’s always a tale of woe attached. Just look at Paul. He is trying to be prudent, but he realizes that the AIDS scare is hurting his business and it’s freaked everyone in the gay community out. The thing is, in these early stages, nobody knew how it was transmitted and it wasn’t called AIDS at the time. But it was enough to scare men away from bathhouses and upper scale gentlemen’s clubs. Paul is very concerned about his partner and of course, how bad this epidemic is going to get. So, Paul’s contribution to Vincent is a bit skinny. In fact, Vincent is feeling the pinch from a lot of his business connections. Feast or famine, isn’t that the saying? Vincent and Rudy have a good working relationship because it’s reciprocal. Rudy understands that times are tough all over. It’s Frankie who should get his head checked. Rudy also gets the frustration of having to compete with other mobsters and you see his disdain for the Teflon Don, Gotti. It a tough business out there, even for him.

Speaking of relationships, I turn the focus on the romantic ones. Vincent and Abbey are just ho-hum. Vincent and his ex-wife, on the other hand, seem to be reheating things up a bit. Bobby is in the clear, so we just know that means more escapades in the future and Eileen meets a man and goes out on a date with him. She tests the waters, only to find out that she is not only explicitly frank about her past and her current occupation but that she is attracted to him. It especially all falls into place during another date with the guy we now know is Hank. He compliments her choice of career and explains what she does to his friends. Consequently, their interests are piqued, and Eileen finds herself on the receiving end of questions and conversations of a positive nature. I’m hoping this thing with Hank works out.

And then there are working relationships and how quickly they can deteriorate. Lori is finding out that her ego is getting in the way of productions. She is insulted and believes that certain things are beneath her, especially some gross stuff that is expected of her on a lavish set. There’s standing up for yourself and then there’s getting too big for your britches. Just when she thinks her agent is going to support her, she’s told otherwise. A bit of a blow to her ego…so she soldiers on. And to numb her anger and disgust, she turns to cocaine as a coping mechanism. I sense another stint in a rehabilitation center isn’t too far off or that she gets fired.

Bobby’s son is now a Wall Street type, with the clothes and smarts to show. He hangs with rich snotty white frat boys, the kind who have plenty of money to burn and will pay for a very good time. Sensing an opportunity, Joey brokers private deals where he gets his dad to procure the ladies from the French Parlor, plenty of drugs and luxury hotel rooms. This could parlay into more private parties and bigger bucks. Last, there is Detective Alston and Gene Goldman who are 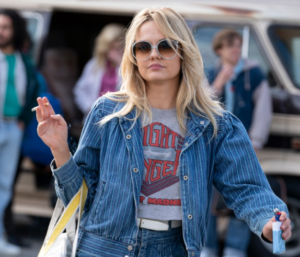 investigating the real estate and how valuable certain parcels of land are. This is, after all, the mid-1980s and the excess of money, real estate and greed are at a high. Who owns which rich properties and how is this going to affect The Deuce? Will there be legal suits brought forth? Will Detective Alston get all the bad guys in the area? Will the neighborhood get cleaned up? What’s with Gene moonlighting in seedy underground dives, having reckless sexual encounters? And what’s with Shay? Does she have AIDS? Has Abbey’s work in trying to help street workers all been in vain? Is anybody at The Deuce going to end up happy?

The times are surely changing so, the title has got to be a play on words. Those who don’t know see it as  – ‘Death of Fame’ or at least the fame the denizens The Deuce have carved out for themselves at any rate.