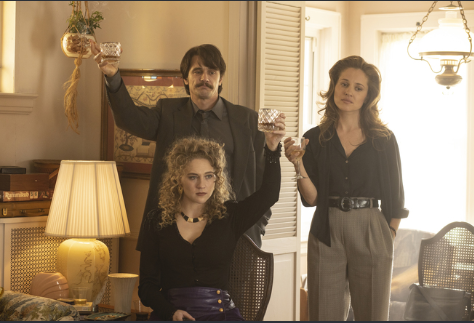 We’ve seen characters leave for better and some, for worse. Another surprise return comes in the form of Darlene. Darlene is on the path to better prospects (studying to become a nurse) and reaches out to Abby for help. People must do what they need to do in order to survive and women like Darlene, Lori and Eileen have left the streets and gone on to different career paths. And yet, they are STILL judged for that they did in the past. Again, you don’t judge people by their pasts. They don’t live there anymore, and it’s got to hurt these women on an emotional and psychological level.

Vincent is a mess. He has one thing on his mind: revenge. He’s angry and lashes out at Rudy because when you’re blinded by rage and want the need for justice so badly that everyone in your path becomes suspect, you clearly aren’t thinking straight. Under emotional duress, Vincent assumes Rudy had a hand in Frankie’s murder, only to have Rudy call him out on his accusation. Rudy, for his part, isn’t exactly thrilled at the fact that the Gotti family is rising in power and prestige and he’s feeling resentful of it. 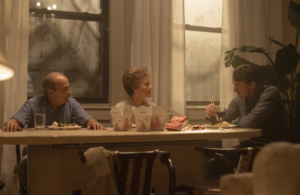 Paul and Todd continue to struggle too. Todd is so sick and beyond help – at this point, we must remember that in 1985, medicine did not have the advances that today’s medical field has, and gay marriage was not legally recognized in the 1980s. Even though they are in a relationship, technically Paul is not allowed to do anything where Todd’s medical decisions are concerned. Todd’s parents come to see their son and it’s sad; no parent wants to see their child so medically incapacitated and Todd is just a body lying in a bed. He can’t fend for himself and is in and out of reality most of the time. The relationship between Todd and his parents was very strained. This is something of a wake-up call for Paul; life is fleeting, and you only have so much time on earth – and once Todd passes away, Paul makes the courageous decision to contact his own father.

Harvey and Eileen are at odds with each other – again – over Eileen’s rough script for her newest film. I always got the sense that Harvey had feelings for Eileen but never really knew how to tell her what he felt – he supported her venture into the adult film industry and being a female director, but the professional tension got in the way. I think that Eileen never saw Harvey as a love interest, but more of a mentor and someone who would always give her a frank, brutally honest assessment of her work. Harvey, being ornery, takes his frustration out on Eileen by insulting her ideas and creative thinking. Like, WTF, Harvey?! In fact, I’m getting pretty fed up with a lot of the men on The Deuce, mainly for their narrow-minded thinking. Eileen is pretty upset about the whole exchange and she goes from the frying pan and into the fire when she ends up dealing with her son Adam. Adam, it seems, has one of those get-rich-quick schemes and needs his mother to front the cash for it. He’s just another example of how some of the men of The Deuce section of town coast of the labor of the women and didn’t have to do the actual leg work but expect to profit from it. Eileen doesn’t really want to part with the money because she sees so many holes in Adam’s plan. Well, Adam goes off on a piercing tirade about his mother and her career in adult films. 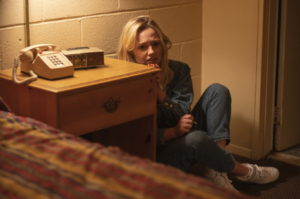 Lori does an appearance at a strip club (hey, you gotta take advantage of the opportunities that are presented) when it becomes apparent that her adoring fans feel that they have the right to feel like she’s a possession. What really became creepy was the moment where a fan crossed the line and Lori was alone in her hotel room – expecting a date (and I’m sure a lot more) and she’s terrified. She purchases a gun from a shop afterward because she is so panicked. And this is where it gets weird because I thought she was going to go back to LA with Greg…but she’s going to Indiana. It was very skewed – was this something she dreamt up? Hallucinated? Because when people are experiencing trauma, often you enter into a fight or flight state and your memory may play tricks on you. The hotel manager shows up and says there’s nobody around. So, what gives? It proved an unsettling sequence.

Bobby’s got his issues with the girls also. Can he ever learn? Interesting to note that the ladies of the massage parlor let Bobby know a thing or two about him (you know, how he doesn’t do ANY of the work but gets a cut regardless). The exploitation of these women is just disgusting, and I really hope to see more protection and bigger cuts of the profits go back to where it belongs: the women doing the ACTUAL work.

And as for Vincent…I don’t know what to even say at this point. I knew Frankie was a hothead and a troublemaker. He messed with the wrong guys and paid the ultimate price for it, but I thought Vincent was a little smarter than that. I get that going through the courts was not an option due to their legal and illegal business enterprises, but Vincent really got himself into a quandary: the guy he murders, Pasquale, just HAPPENS to be affiliated with the Gambino family. This does not bode well for Vincent and in some regard, Rudy. Does this mean another death is in the works before The Deuce is said and done?