One relationship blossoms, while another is stuck in danger, in the penultimate episode 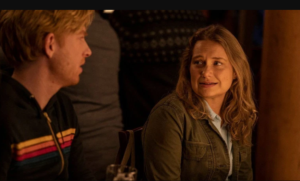 We are gonna have to deal with our shit at some point, says Billy, and this is not during one of his motivational speeches, but addressed to Ruby, when she freaks out about going to the cops to confess about the dead lady in the barn. Even though Billy and Ruby have consistently made questionable decisions over the course of the previous 5 episodes, most notably Ruby leaving her phone at the crime scene (SUSPECT!), for once Billy does try to do the saner thing, which they take a lifetime to do (*spoiler* they do not confess, at least not till the episode ends). 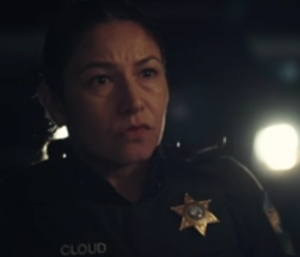 Once again, the episode is a bit light on plot and does not move much ahead, to the extent that the episode may be summarised in just two or three sentences. The first few minutes of the episode though reveal that Laurel the taxidermist was an acquaintance of Daniel Goober, which makes her a person of interest to the cops. These cops, Babe Cloud (pictured, such a cool name) and Ryan, though, look like a couple of novices when investigating the crime scene, and their talk eerily strikes me as Fargo-esque, which is a big hit in my opinion. Meanwhile, the runaway couple finds time to self reflect on their life in the middle of nowhere, when Billy inadvertently pushes Ruby’s buttons, by giving her grief about how horrible of a family person she is. This is the first time that Ruby really lets out her struggles of having the responsibility of a wife and a mother, which has bogged her down and led to all this muck puddle of love, sex and dead people. This makes Billy confess how much he wanted her to have his babies. Her response – she didn’t want *ginger* kids. Well, at least they quieten down in the end.

Meanwhile, we see another relationship developing between Babe and Laurel, when the former goes to Laurel’s house for “investigation”. The first thing she asks is not how she discovered the body, but rather her excellent taxidermy work. This led me to a complete deja vu of Fargo, where there are good innocent cops in full police uniform conversing with people, rather than asking them questions. We then see Babe take out a completely untouched notepad, thus making it clear that either the town is crime-proof, people-proof or worse, the home to some of the shittiest cops in the world. Her notepad is filled with 3 NOs (I will ask you to see this glorious scene by yourself). Meanwhile, it seems that Babe has taken quite a liking to Laurel, and soon they leave for the local pub, where Laurel croons to ‘I will always love you’ by Whitney Houston, to an appreciating audience. She asserts that she is getting louder every week. Babe fumbles with her questioning, which makes Laurel think that she is being framed for the murder, although the moment passes quickly. 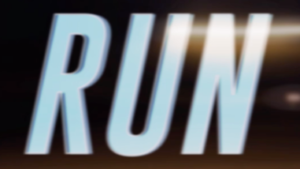 And then serendipity strikes when Billy and Ruby go off to the same pub to have a drink before they confess. Ruby spots Babe, while she is coming back from the washroom, and tries to manipulate Billy into running off by telling him that the train has only reached the next station, which might not be that far (I do not like this woman), and of course, Billy falls for this, and off they go, leaving behind a piece of evidence in the form of Laurel’s jacket that she gave Billy. AGAIN. The couple would not be making it onto the train, is my assumption.

So what happens in the season finale? It seems that the Babe-Laurel relationship needs to take a pause for the cause, while hopefully we will get a glimpse of an angry husband. But the real question is – WHERE IS DANIEL GOOBER?