Truth be told there is not much new to say about RUN coming our way in April. But with HBO fans forced to do some social distancing sitting home with a new show or two will while away the hours. Around here we were intrigued by this upcoming offering from Phoebe Waller-Bridge enough to share the Teaser they have running right now. Take it in:

The clip does offer us a glimpse of the chemistry between Ruby and Bill and even gives us a since of the thriller in this hybrid comedy-thriller, though we are left in the dark just what that thriller element is all about.  HBO tells us –

When will it premiere?
‌‌Run will debut on April 12.

What’s it about?
Ruby Richardson walks away from her ordinary life in the suburbs to revisit her past with her college boyfriend, Billy Johnson. The two made a pact 17 years earlier: If either one of them texted the word “RUN” and the other replied with the same, they would drop everything and meet in Grand Central Station and travel across America together.

Who will I recognize?
Nurse Jackie alum and two-time Emmy Award winner Merritt Wever will play Ruby, while Domhnall Gleeson, aka General Hux in the most recent Star Wars films, is Billy. Phoebe Waller-Bridge (Fleabag, Goodbye Christopher Robin — which starred Gleeson) guest stars as Laurel, a woman who Ruby and Billy meet on their journey. 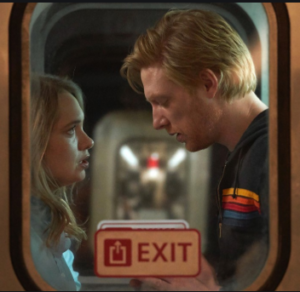 Archie Panjabi (I Know This Much Is True) as Fiona, Billy’s former PA.

Who’s behind the camera?
After working together on Fleabag and Killing Eve, Waller-Bridge and Vicky Jones are once again joining forces, with Jones serving as an executive producer and writer on Run. Emily Leo and Kate Dennis are also executive-producing, with Dennis slated to direct the pilot.

What should I watch while I wait?
For another story about a woman leaving her monotonous life behind to live more spontaneously, check out raunchy comedy SALLY4EVER. In a similar vein, ENLIGHTENED follows a former corporate executive (Laura Dern) striving to emotionally evolve after suffering a nervous breakdown. INSECURE, BIG LITTLE LIES, GIRLS and MRS. FLETCHER are other binge-worthy, female-led series with a focus on reinvention.

While we are all supposed to stay put we might have the urge to RUN!