I can’t believe this ends the first season of Run and it certainly went out with quite a wallop. Not yet verified whether this will be the end or if a season two will be in the future, we’re left seeing Ruby (Merritt Wever) and Billy (Domhnall Gleeson) reach Los Angeles and the time to make their decision. Do they go separate ways never to speak to each other again or abandon what they’ve lived and together start over anew?  What would you choose?

After a jaunty run chasing a potato truck, Ruby and Billy catch a ride and make it back onto the train. While attempting to get physical, Ruby gets into the dirty talk a bit though I think the fugitives aspect might not be Billy’s thing. “I want to run with you forever.” There’s certainly been a lot to go down on this trip of theirs and it’s becoming even harder to walk away from each other. In my opinion, the chemistry of the actors works well together because I can feel that so much of how they interact with each other is based on this past they have that we don’t see.  They have a very casual feeling with each other despite being out of each other’s lives for so many years. Is enough of you still left after that long to be the same way with a person you knew then? But also knowing their present lives and how they relate to each other, can you know someone and yet not know them at all? 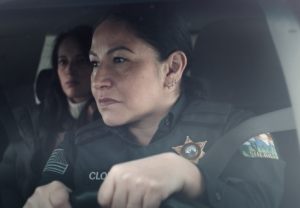 Speaking of getting down and dirty, Deputy Babe Cloud (Tamara Podemski) hooked up with the lovely taxidermist Laurel (Phoebe Waller-Bridge) but awakes to find her mysteriously missing. Or rather, tending to dead things in the basement.  Unfortunately, she’s also tending to live things like Daniel (Kelsey Flower) a.k.a. owner of the home where Fiona (Archie Panjabi) had her tumble.  I could live on a whole show of just Babe and Laurel – cop goes out busting bad guys and solving cases with the help of her taxidermist girlfriend.  Sign me up!  But first, back to our other lovers.

Now that they’ve done the horizontal salsa, it’s time for the hard truths. Billy knows Ruby is going home. Yup, even though he wants her, he acknowledges that she has too much to walk away from. Of course, sometimes men are idiots. In this case, Ruby does want Billy  But mostly, I think she wants to be happy. And right now, that’s what this gives her. A lot of unpleasantness too, but adventure and escape and someone to make her feel wanted and appreciated, and in the end, isn’t that what we all want and need?  She decides she wants to watch Billy’s motivational talk. But so here’s the thing about leaving people unattended at your laptop, they can click on things and go to other apps to see stuff you wish they didn’t see. Ruby does just that and learns information that is a game-changer.  And now that she knows all the information, harsh realities start closing in around her.  What’s a girl to do next? 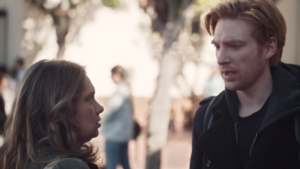 While I want a second season and the spillover of this jaunt and all the unintended consequences to come crashing on all the characters, I’m actually pretty pleased with how this story stands on its own and I’m not surprised it ended this way.  I thought the cast was fantastic. Wever and Gleeson have amazing chemistry together.  I wish we would have gotten more Archie Panjabi!  She’s hilarious and I loved watching her jaunt through the field with the bag of money. Rich Sommer is known for playing douchebag husbands and he sells it so well.  I loved hating him as Harry on Mad Men, though this is arguably a grayer area for Laurence.  I’d like to rewatch it all in one binge to see how the story flows, but I really enjoyed watching and appreciated what I felt was the ultimate message. Trying to outrun your life will create more drama than acknowledging and fixing what needs to be fixed.  Oh, and don’t text your ex. You’re over for a reason.