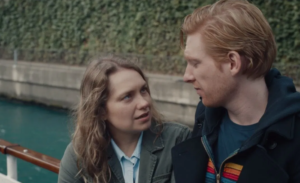 Boy oh boy. Ruby and Billy are both a hot mess. Each of them is struggling with life and trying to put on a brave face while spending 24 hours in Chicago. Ruby is living an empty life, devoid of excitement and passion, breaking under the pressure of job demands, parental demands and marital expectations. Billy is struggling with the mysterious Fiona, his finances and the fact that he is in over his head with his motivational speaking and wants out. Billy and Ruby are miserable with their current lives and seek solace with each other.

This episode is a mixture of the thrill of having a clandestine adventure, trying to be spontaneous and being in the moment, while desperately trying to block the reality of a humdrum sham of a life. We see just how miserable Ruby is – in the flashback to her wedding day – she texted RUN to Billy and never received a response. You could see she married her husband to have a boring predictable life because it provided Ruby with a sense of security. There was no exciting thrill that brides usually have on their wedding day; 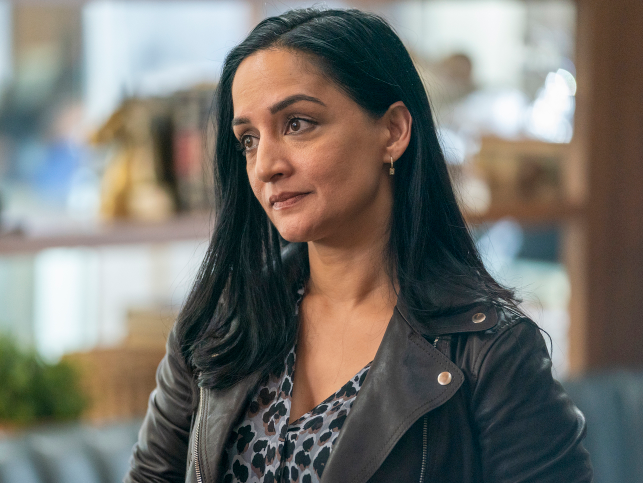 Ruby looked miserable and as if she were about to be sentenced to jail. Present-day Ruby also has no money – as her husband has blocked all her accounts. How far can you go without money, especially when you are on the run?

Billy has money but is becoming increasingly annoyed with Fiona (Archie Panjabi, pictured) – his business partner of sorts – as she knows he is in Chicago and not solitaire. The running pair have a few hours to roam the city of Chicago and they both admit to being unfulfilled. Into their lives comes Fiona. She makes her appearance first with Ruby in a dressing room of a women’s clothing store – then as the constant presence on Billy’s phone with cryptic text messages. Billy is pretty annoyed and wants to prevent Fiona from having any access to his bank account – so withdrawing a huge wad of cash from the bank and stuffing the money in a bag and carrying it around with you seems like a practical thing to do, right?

Ruby, for her part, is just so happy to talk to someone who she believes is a total stranger. Ruby has zero clues that the stranger she met in the clothing store is Billy’s business partner. Billy does not want to have anything more to do with the business side of things and Fiona is adamant that if he reneges on any business arrangements, legal trouble will soon follow. Fiona’s deceitful – homing in on the unsuspecting Ruby, getting as much information out her as she can. Problem is, Ruby is just so unhappy and grateful to have made a friend, that she does not show any discretion and reveals some intimate information.

Once Fiona and Billy meet up– which is basically a confrontation between the two of them, all bets are off. We come to understand how upset Fiona is with her business partner. We also see just how out of it Billy has become – he is unraveled, lacks enthusiasm and doesn’t want to continue being in business with Fiona. She’s made money off him – and does not want that to stop. Billy is running from his mundane existence – the same way Ruby is. These two could probably benefit from some serious counseling, as they appear to 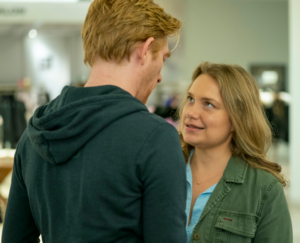 have a lot of emotional trauma that has not been dealt with. Counseling is always a proactive thing and could perhaps help these two out – but we know that will not be the case anytime soon, besides we wouldn’t have a series, would we?

Billy and Ruby end up finally taking possession of the deluxe suite they needed to take during their layover in the city and as the tension between them begins to build, I think we all knew that these two were going to throw caution to the wind and with a big bed at their disposal, they make good use of it. They think they are alone, in the safety and privacy of their hotel suite. Unfortunately, that is not the case. Take one vindictive former business partner and a cell phone on the record function, and it is all downhill from there. Like I said, what a hot mess.

More of the thriller side of the story takes place in the next episode. Run Episode 4: “Chase” debuts Sunday, May 03 at 10:30pm ET.