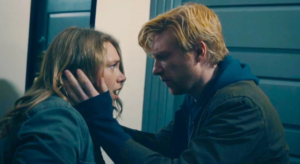 Skeletons in the closet, dead woman in the barn, in a breathless start to RUN’s second half of the season

I’ll admit when I took up this series to watch, I had not seen its trailer, only read some articles on certain websites which called it a comedy, thriller and romance at various points, which made me curious enough to watch it. Of course, having THE Phoebe Waller-Bridge as a producer on the show also played a part in grabbing my attention, and well, what’s the harm in trying a new show that also is a love story (not a big fan of those). And for the first three episodes, I was kind of having a middling opinion about it, which has been a first after watching various series. that got me got me thinking that I may not be able to handle it. Then came along Fiona, and the series and my opinion, both swerved 180°. 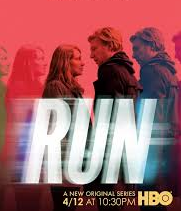 Case in point: there were various points in the first 3 episodes where I kind of skipped forward a bit, cause I was not a fan of certain cheesy romantic moments but, I don’t want to hammer home my point. Fiona stole the last scene of episode 3 though, which made me hopeful that there would be skeletons tumbling out of everyone’s closet in the coming episodes. Even in the beginning of the fourth episode, all we knew was that Billy and Ruby both are hiding things from each other, which I assume every couple does (I have no experience in that department), and again for the first few minutes, I thought I was watching a by-the-numbers romantic show. Then Billy’s ‘grandma’ sent him a message, and all hell broke loose. We saw a bag full of cash, an audio file with weird noises, and a chase sequence. Where do we go from here?  So how does the 5th episode start out?

Well, turns out that Billy and Ruby apparently had made a pact when they were together about the ‘RUN’ situation. And that’s why we earlier saw each of them texting the word to each other, only to receive no reply. Even if the plan sounds atrocious, at least they would have a good time, right? Well, that’s not how the world works. As the two jump off the train screaming at each other to follow Fiona (seems that Ruby is a better jumper than Billy) and go off into the lush jungle, they might have had little idea of how the day would pan out. Well, they do catch up with Fiona in a while, while spiritedly dropping F-bombs at each other. They end up in a cottage/barn, in the middle of nowhere. There’s a knife involved, which ultimately does not prove fatal (we will get to that). Long story short, Fiona is not willing to part with the bag, as she feels it’s her hard-earned money that’s in there (it’s not like she did not give Billy a chance). 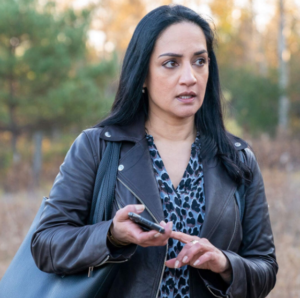 So while they have a pretty hilarious and over-the-top argument in this remote spot, it’s time for a call from Ruby’s husband, wherein he again politely asks her about where she is. And again, Ruby is not truthful to him, which makes him say that he will come get her from the rehab in Malibu, where she must have gone to one time before. And that’s when shit hits the fan (more like woman hits the ground). Ruby slow walks slowly back to the room where the tussle occurred to find Billy sitting crouched on the floor. His expression shows the writing on the wall, although we did not expect to see Fiona impaled!

So what to do now? Nothing but run. They almost forget to get back their money bag, while they completely fail to see that there was someone else in that cottage, one who we see through a long shot. Oh, no. And that’s where, in this half-hour, Phoebe Waller-Bridge comes in, as a taxidermist searching for roadkill, who kindly enough gives our duo a lift to the station, even though she was headed in the 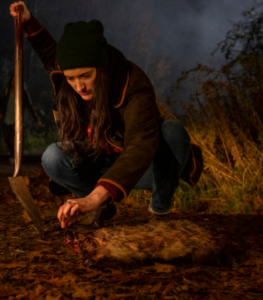 opposite direction. They reach the station, using Billy’s cancer-stricken mom as an excuse, which is most certainly not true, as evidenced by Billy’s ‘why my mother’ response. Our friendly taxidermist’s mom, we learn, also fell prey to cancer, which made me question the runaway couple’s morals (they have not exactly covered themselves in glory at any point till now). The warm hug that Ruby gives to the taxidermist when they reach the station somewhat softened my opinion about her though.

This takes us to the episode close, where we find that Ruby left her phone back at the shack (nooooo!!!!), thus freaking both of them out. Now we have got a dead person, a phone at the scene of the crime an unknown witness, and Ruby’s race against time to reach Malibu before her husband comes to pick her up so that her cover is not blown (spoiler alert: it’s already blown). Here’s to hoping that the series takes some more dark turns, at Billy and Ruby’s expense, and for our pleasure! Check out next week’s promo.