Insecure stars took to social media to address the heightened attention around the world leading up to Sunday’s episode. They pledged a commitment and solidarity in advancing the fight against police brutality and racism. They also made sure to remind us that their 30 minutes of heaven is a moment we all share, as we escape from the realities around us. And I am willing to say, without a shadow of a doubt, that this episode, from the way it was shot, to the way it was written, is Inesecure’s best episode of the series. Here’s why and what makes this true.

Up until now, we’ve explored the friendship between Issa and Molly (and the ladies Kelli and Tiffany). Like the title implies, at the intersections of friendships, insecurities exist. Episode over episode, though sometimes it felt a bit lost, we leaned into those flaws and fell in love with a group of people who many of us 30-something’s identified with. But it was the relationship between Issa and Lawrence that kept many of us coming back. Even as Lawrence left, I can remember the rush of emotions I felt when I saw Chad slurping his drink in the gas station at the end of the Coachella episode. Lawrence and Issa locked eyes and the world stood still (at least in my mind).

Even though we often explored Issa and Lawrence separately, this episode allowed us an opportunity to confront feelings that simply were too difficult to ignore. From the beginning, Issa and Lawrence meet at a restaurant. There’s an awkwardness both of them possess, and their chemistry is undeniable. As characters on this show, their growth is clear and it was time to address the elephant in the room. What happened? Did we do all we could? If we stayed together, where would we be? On the back of those questions, we entered a world of honesty and openness, many of us wish we could possess. And here’s where the show elevated. 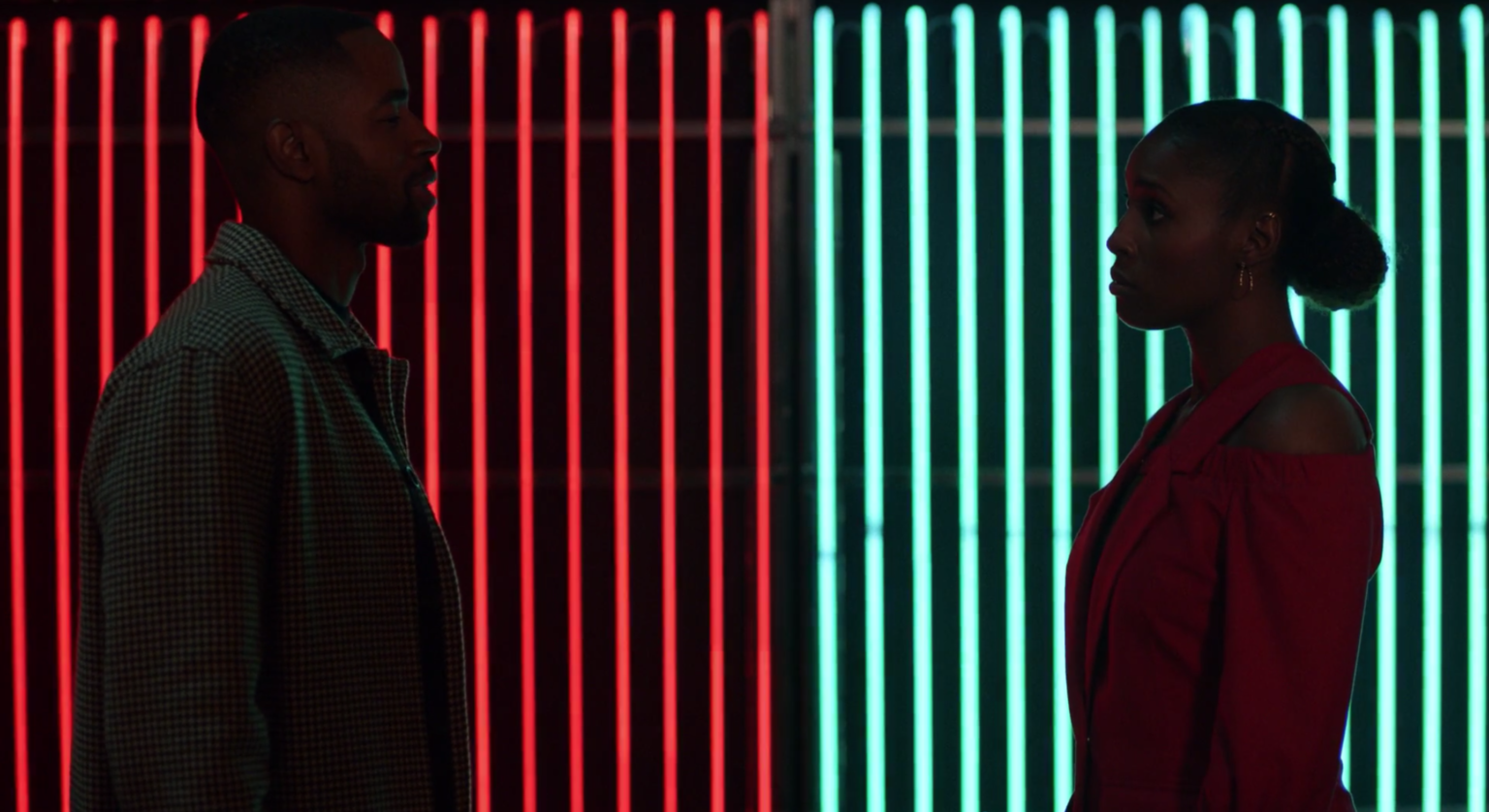 Issa and Lawrence were vulnerable in ways they simply weren’t able to be in seasons 1 and 2. Issa learns that Lawrence was ready to marry her. Lawrence got to ask the infamous question, “why him?” (referring to Daniel). As each of them opened up, the cinematography elevated the conversation. We entered a world of romance with pictures and words. The people (yes, you were rooting for them whether you want to agree with me or not) wanted to see these two reconnect and it finally happened; and it was nothing short of amazing. The dialogue felt authentic. The monologues provided insight and elevated what we already knew about each character. It’s one thing to be a part of the journey, but both Issa and Lawrence eloquently captured their feelings and thoughts, tastefully, kind, and with humor when needed.

In the background lurking was Condola, messaging, and calling, and even though Lawrence set the expectation that they both can be real with each other, he failed to live up to that point for most of the episode. While we had a birds-eye view into Condola’s messages, Issa didn’t. And once she was aware of Condola’s presence, she didn’t falter. It’s a sticky situation, but Lawrence remained present, and Condola remained persistent (more on my hypothesis later). Either way, the night ended with Issa getting an invite into Lawrence’s place.

I can only imagine the feelings Issa felt walking into this space. A space that, a man who years earlier could barely afford, symbolized a growth, sexiness, and appeal she didn’t know she’d experience. Feelings came forward and she goes to the bathroom. (Side note, Issa excused herself a couple of times and I just knew we’d get a bathroom mirror scene, but nope we didn’t!) Anywhoo, Issa eventually realizes that Condola isn’t too far removed from Lawrence’s life. And while for me, I’d be intimated or worse, chicken out and run away, Issa’s character is now more active, intentional, and clear. Issa confesses her desire to stay and the two submit to a night of intimacy. Moments like these tug on our hearts. Two people, we’re invested in, finally getting a moment to shut the world out and just exist together. The entire evening felt like an opportunity to reconcile hurt, pain, and love and it ended perfectly.

Was this just a drive-by? Was this closure? Was this the beginning of another chance? We don’t know. I do feel as if Condoloa may throw a wrench into things. Is she reaching out so much because she’s pregnant? Does she want Lawrence back or merely require some closure on her end? I imagine we will find out in the season finale. In the meantime, here’s the trailer for next week’s episode.