Nearing the midseason, Issa and Molly (Yvonne Orli) are clearly still feeling some pangs in their friendship. They both feel like they are vibing new versions of themselves. Issa is organizing the block party. She’s doing something she’s passionate about and that could bring amazing awareness to people of color and their businesses in the neighborhood. For Molly, she’s committed to Andrew (Alexander Hodge) and trying to balance work and the longest relationship she’s had. And that’s not an easy feat.  But Issa and Molly both feel like the other person is bringing up the past or past versions of themselves, while they are trying to move forward.  And while the specific issue between them might not match, I think a lot of people can identify with this situation with friendships.  Where you’re dealing with problems but not sure how to talk about it or don’t even want to face that conversation.  You can get by on smiles and small talk, hoping maybe they’ll let it go and things can just be fine.  But it’s not fine.

They even bring it up with other people. Issa questions Kelli (Natasha Rothwell) about Molly and if she’s said anything about the friendship. I’ve gotten the sense over the years that in the foursome, Kelli and Tiffany (Amanda Seales) are closer to each other while Issa and Molly are closer to each other.  Though obviously not lately, but Kelli immediately tells Issa that they just need to talk. That Molly is probably having similar thoughts and it’s something a conversation could work out. For Kelli, that’s pretty sensible, adult advice. She’s right. Just as Tiffany tells Molly when she asks. But it’s easier to ignore things than to have possibly difficult conversations. Even their whole miscommunication over parking could have been cleared up if they both just talked. If Issa had just said she was planning on taking the space, there wouldn’t have been an issue over one word with different contexts. 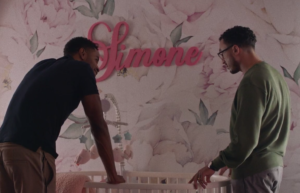 Things hit even harder when Issa can’t get through with Condola (Christina Elmore) who I’m guessing is dodging due to being on the outs with Lawrence (Jay Ellis). She finalizes the signage for the flyers and then loses her headliner. Issa knows Molly’s bae Andrew can connect her with a possible artist, but Molly’s immediate thought is the contract. The two don’t talk it out and Molly ultimately decides not to get Andrew involved. We got a taste of where they were when the season started and I’m seeing even more how they get there.  Though the standout moment of the episode to me was when Derek (Wade Allain-Marcus) was talking to Lawrence about his newborn daughter. He admitted to being a less than stellar dude to women over the years and realized as he looked at his own daughter than guys would do the same to her later in life. Yep, we’re all someone’s daughter. Human beings deserve to be treated well and with respect. I wish more guys could get that point but without needing the context of having their own daughter to understand not to be shady towards women. He gets it now, so I’ll take the win.

And we conclude with taking the “Wine Down” and the next promo.