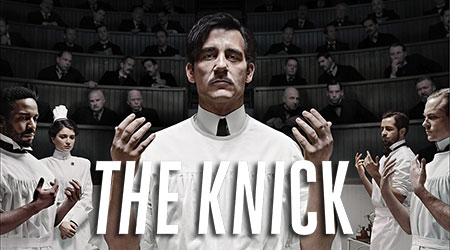 That is not a typo. For a limited time Season One of THE KNICK by Steven Soderbergh will be available for HBO subscribers. The show, which is a hit on HBO’s sister channel Cinemax, had a 10-episode run in 2014 and is gearing up for a second season premiering on 10.16.15. I bet HBO wished it had THE KNICK in its lineup instead. Beginning on 08.14 HBO’s digital formats will carry the series from now until 10.25. It will also air on HBO2 beginning in October.

Here with all the exact details is an HBO Press Release:

Before the Emmy-nominated, Peabody Award-winning show THE KNICK launches its second season Oct. 16, exclusively on CINEMAX, the first season of the edgy drama series will be available in a special presentation on the HBO digital platforms HBO NOW, HBO GO and HBO On Demand, as well as online affiliate portals, for a limited ten-week period, starting Friday, Aug. 14. Non-HBO and CINEMAX subscribers will even have a chance to catch up on season one of the show during a free trial period currently being offered on HBO NOW. In addition, HBO2 will present a marathon of the entire ten-episode first season on Saturday, Oct. 10, starting at noon (ET/PT).

Debuting on CINEMAX in Aug. 2014, THE KNICK was recently nominated for five Emmys, including Outstanding Directing for a Drama Series (Steven Soderbergh). Helmed by Steven Soderbergh and starring Clive Owen as the brilliant but emotionally tortured surgeon Dr. John W. Thackery, the upcoming second season, set in 1901, finds the staff of the Knick in turmoil as they prepare for the hospital to be shuttered in favor of a new building uptown. In this world of corruption, invention and progress, everyone is searching for the new path that will help him or her survive. Whether it’s a path toward justice, freedom, love or just plain survival, nothing comes easy. The creators and writing team of Jack Amiel & Michael Begler serve as executive producers along with Gregory Jacobs, Steven Soderbergh, Michael Sugar and Clive Owen.

Keep in mind though the videos above promote HBONow Clive Owen and company can also be seen on HBOGo or that if you want to capture it on your DVR a marathon runs on HBO2 later in the year. We have left information vague regarding plot specifics as not to spoil the story for those that haven’t seen it. The basic premise however follows courtesy of Cinemax. It is centered on the Knickerbocker Hospital and the groundbreaking surgeons, nurses and staff who work there, pushing the bounds of medicine in a time of astonishingly high mortality rates and zero antibiotics. Academy Award and Emmy nominee Clive Owen stars as Doctor John Thackery, a brilliant surgeon pioneering new methods in the field, despite his secret addiction to cocaine. He leads a team of doctors including his protégé Dr. Everett Gallinger; the young Dr. Bertie Chickering Jr. and Dr. Algernon Edwards, a promising surgeon who’s been recently thrust upon him. The lively cast of characters at the hospital also includes Cornelia Robertson, the daughter of its benefactor, Captain August Robertson; surly ambulance driver Tom Cleary; Lucy Elkins; a fresh-faced nurse from the country; the crooked hospital administrator Herman Barrow; and Sister Harriet, a nun who isn’t afraid to speak her mind. While literally struggling to keep the lights on, the hospital attempts to attract a wealthy clientele, without sacrificing quality care.

Here is your chance to watch THE KNICK. We suggest you take advantage of it.