As we delve deeper into the hearts of the characters at the Knick, we see some filled with promise and determination; others with malice and greed. In 1901, the medical field is ripe for change: cutting technology such as the X-ray machine and fever cabinets help give doctors a better understanding on how to treat their patients. We also see the enlightenment of other characters who wish to embrace change and/or higher learning. All of the running around Thack has been doing, experimenting on corpses and such looks like it’s starting to pay off. The pig seems to be getting better and Thack sets his sights on his former fiancée, Abigail. Is this the first chink in the armor to be removed? Do we see Thack in a different light now? Instead of getting high on smack and having sex with that prostitute, he works tirelessly to come up with a cure, in the hopes that it will save Abigail. Forward thinking and risky as he is, Thack is a genius, even though his methods are risqué. More about him further down the road.

Speaking of forward thinking, Opal Edward (played by Zaraah Abrahams, pictured) certainly likes to push the limits. Upon meeting the Robertson’s, she forms her own opinions on what progressive thinking is and is no shy wallflower. Algie interjects nervously, trying to smooth the conversation. Hard to keep up polite appearances when Cornelia shows up for this luncheon, only to find out that Algie is married. The shock and dismay on her pretty face is ver 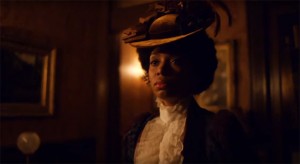 y evident. Opal looks over everyone in that room, her eyes missing nothing. In one way, you have to admire her as she only wants to see her husband be respected as a man and a professional. On the other hand, she looks like a woman that you do not want to cross. Cornelia should best keep her distance. Algie seems to be putting on
airs – his character is one of being repressed and stuffy when he is around his benefactors. Upon going to Harlem with Opal, we see a different side to him, one charming, funny and relaxed. It is my hope he puts forth some good intentions into making his marriage work. Opal is a strong willed woman and wants her husband to succeed. Nothing wrong with having a supportive spouse.

More bad news for Cornelia though, who learns that her husband has to take an extended business trip. Gulp! Mother-in-law says that they will take care of sweet Cornelia for Phillip. Yikes. Phillip’s absence provides Cornelia with some down time to do a little private eye work. Sneaking out of her in-law’s mansion, she tries to find information by going to the former Speight residence. A man looming in the shadows watches her every move. This is not good. Obviously, she should leave the death of Speight alone but when has Cornelia ever listened to reason? 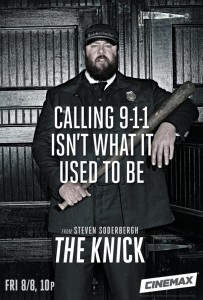 As for Tom Cleary (played by Chris Sullivan) I say give this man MVP for the episode. The man has guts, balls and the tenacity to round up some of the most elite “ladies” and forcing them into ‘helping out’ – if these women wish to remain anonymous and never have anything revealed about them (secret abortion being performed), they’d better use whatever power or influence they have or Cleary will personally see to it that their so called unblemished reputations get dragged through the mud. I love how he is being so covert about the whole situation. This cloak and dagger role suits him (and Cornelia, who was hiding in the next room whilst set meeting was taking place); he has good intentions where Harriet is concerned. Imagine the shock on Harriet’s face when the zealous judge dismissed the case. I like Cleary. he’s not stuffy, is a straight shooter and the man, for all his burly talk and menacing appearance, actually has a good heart.

Bertie, while making progress at the hospital, is so straight laced that it’s actually funny seeing him at a brothel, in order to become familiarized with the art of lovemaking. However, amidst the fact that he is earning the respect of Dr. Zinberg, a darker secret looms: his mother is not well. Her condition is extremely dicey; we find out that she has a growth in her throat and there are no known medical procedures to successfully remove such a growth. It could be another opportunity to do some research and perhaps, perform a highly unusual surgery that may yield successful results. Perhaps Bertie is coming into his own and will find the means to perform this surgery with great success; earning the respect of his colleagues while saving his mother’s life. I don’t think Bertie has come to realize or understand that if he begins to conduct his own research, he still is Thack’s protégée (whether he likes it or not).

As for the questionable motives of Dr. Mays, well, let’s just say that if he put a little more effort into paying attention to operating room procedures instead of flirting with the nurse, he’d still be alive. Interesting to note that many nurses, back in the day, ended up marrying the doctors they were assigned to work with. Bertie’s mother was one such case. Working in close proximity would lead way to personal and professional boundaries becoming blurred. Just look at Thack and Lucy. Well, maybe they’re not the best example, but you get the idea. Lucy’s father has high-tailed it out of New York, and a good thing, too. Thack would have beaten the pulp out of Elkins for what he did to Lucy. Lucy, for her part is trying to remain cold and professional. She’s also been doing her own professional development: reading up on the female anatomy and we see the stirrings of higher education come to light. Her roommate plants the seed. In 1901, there are no female doctors. Perhaps it’s time for change. (Go Lucy!)

Everett is beginning to warp into something malignant. The man has become unhinged. He’s becoming obsessed with the whole practice and science of eugenics. After Eleanor is attacked by some homeless children, he ends up speaking with one of his former Penn State alumni. Seeing the carefully framed 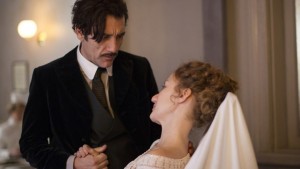 and dark office just adds to the ominous tone of the conversation. How to control all these immigrants coming into the country? Mass sterilization. Everett has gone down a dark path: his wife is just a former, pathetic façade of a woman; his sister in law appears to have the hots for Everett and his genuine disdain for immigrants is palpable. He’s a racist idiot under the guise of being a medical doctor. I sense a lot of suffering for him down the line.

Getting back to Abigail, Thack and Algie are working hard to treat her – after having another seizure – but Thack insists that they keep going and raise her temperature. Algie is shocked and upset; he doesn’t want to cause further harm to Abigail. Thack places her in the fever cabinet – to his surprise, her temperature hits the right degree and they inject her with the quinine. It seems that Abigail is on the road to recovery, free of syphilis and maybe…..just maybe….Thack is on the road to redemption. Only time well tell after this episode of Wonderful Surprises!

One great thing about this series is we get a Post-Op clip. Here is the one for this episode and it includes what happens to Dr. Mays. Watch.

The next episode of The Knick is  Friday, November 13 and is entitled “Whiplash.” Here is the preview.