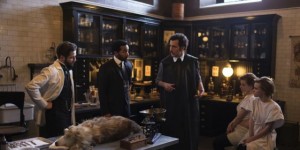 First, if you missed it here is last week’s review. Now, in this week’s episode of The Knick, we see how rules are meant to be bent, broken and stretched to capacity. Take for instance the ideology of having a black man perform a surgery at the Knickerbocker hospital, even if the suggestion comes from another prominent doctor on staff. Do you really think the Board of Directors is going to look the other way just this one time? Also, isn’t going by the book and adhering to rules something that Dr. Zinberg is constantly preaching to his staff? For her part, isn’t Sister Harriet always trying to do the right thing, only to go from one disappointment to another? What about Henry doing his wheeling and dealing behind Daddy Robertson’s back? And Herman?! Good God, if there was ever a case for a man going beyond wanting his cake and eating it too it is him! 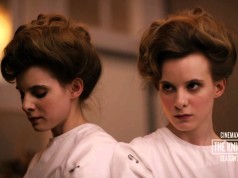 Now, how about that idea of hypnosis: real or a hoax? No known studies have been carried out and tested, so this could be a new realm of medicine to explore. Is there a bona fide medical component to hypnosis that Thackery can actually carry out as part of his medical research? Just think; if so the money that the Board of Directors can charge per patient would be endless! The Board will think John is the reformed Golden Boy! While pondering if hypnosis is legit, John observes a pair of conjoined twins; young Russian girls who are basically being pimped out as part of a freak show, to their fear and shame. Here is another medical topic of research that John can take on: the possibility of performing the radical and untried surgery of separating the twins. To say that this man is cutting edge and risqué is an understatement. He’s slightly out in lunar orbit. And to be honest, a part of me admires John Thackeray for having the gumption and the backbone to push the limits of medicine and science. Mind you, if it weren’t for medical breakthroughs and experiments, such as what John wants to do with the conjoined twins, we wouldn’t have the progression in the medical field like we did today. John is dedicated but sometimes comes across as over-zealous in nature. Case and point: he discusses the idea of separating the twins with Algie and Everett. Can it be done? According to the X-ray of the twin’s system, yes, but remember John’s experimented on animals. Not quite the same as human beings.

Bertie, with great courage and daring, decides to take matters into his own hands, with Algernon, in order to operate on his beloved mother. What a heartbreaking scene. In Bertie’s desperation to get rid of the life threatening tumor, he is caught by an orderly and then by Dr. Zinberg himself. Well really, what would anyone in that grueling situation do? It’s your own mother and this is a time where action is needed. Unfortunately, Mrs. Chickering passes away on the operating table. Distraught, in shock and emotional, Bertie realizes that while Zinberg had a point about needing the time and proper research to carry out an operation such as a laryngectomy, he cannot stay at Mount Sinai Hospital. In some ways, taking that leap of faith and attempting a radical surgery was something that Thack would have encouraged Bertie to do. We all wanted Bertie to head back to the Knick. It’s where he always belonged. It’s where he needs to be.

Two characters who are becoming the most distasteful sods at the Knick are Everett Gallinger and Herman Barrow. Everett Gallinger is losing my respect because he is abusing his power as a physician in performing sterilization operations on lower class boys and for his racist undertones towards Algernon. When Eleanor tries to host a dinner with the doctor who had previously treated her for depression and insanity, everything goes down the drain fast. Everett proceeds to get drunk and belligerent. Dorothy couldn’t be bothered to eat anything. Doctor Hodgman makes a hasty exit, citing that he was unwell. After watching the episode a second time, he looked really sweaty. My husband said that bubonic plague was running rampant in the city at that time and that doctors would be in harm’s way, given how many patients they treat and the symptoms don’t manifest themselves until days or weeks later. It wouldn’t be the first time sickness entered the Gallinger household. As for Herman Barrow, he is one of the biggest backstabbing, two faced idiots at the Knick because he goes from bad, to worse to just plain repulsive. Barrow pockets money from every opportunity possible, but we see he is also ruled by his lust. Keep spending that money that you don’t have, Hermie! After all, throwing away your wife and children for a prostitute is the morally right thing to do. Anyone with half the sense can see that Junia is nothing but an opportunist who is fleecing Herman. All she has to do is start talking about sex, and Herman can’t think straight. Come to think of it, I have to admire both Lucy and Junia: these women are totally taking advantage of the men in their respective situations. If Henry and Herman are stupid enough to fall for it, well then, too bad. So sad though; I can’t wait to see both of them get their comeuppance.
As for the women of the Knick, let’s just say that there have been some interesting developments and it just goes to show that some of these ladies aren’t ‘delicate 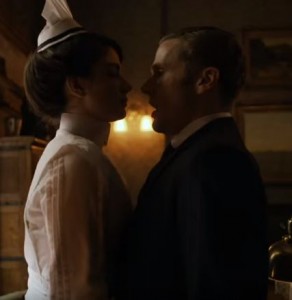 flowers.’ They’re acquiring a taste for power. Some are taking it for themselves; others are still unaware of where their power lies.  What’s up with Nurse Elkins? She sure knows how to, ahem, take matters into her own hands. Literally. Henry Robertson sure found out just how serious Nurse Elkins was about going to the fundraiser for the new Knick hospital. Lucy is on a mission: tired of being used and set aside by the men in her life, she’s now on a personal quest to get what she can, from whomever she can. If Henry is so hot for her, she’s going to use that to her advantage and exploit his weakness for her gain. Good. The fact he was caught completely off guard and couldn’t think of anything slick to say was awesome. She had him right where she wanted him: vulnerable and begging for more. This relationship is budding and I can’t wait to see what’s in store for Lucy and Henry. Speaking of relationships, a reunion with Bertie and Nurse Elkins sets a cordial tone. They have mended fences and there is no tension between them anymore. Now, funny how Lucy gave off a slightly ambiguous vibe about whether or not she was going to the ball. Yes, she’s got Henry in the palm of her hand and he’s with Genevieve, but let’s face it: could there still be some unfinished business between the two?

Harriet is one of the most forlorn people on the show. The woman feels as if she has no calling, no path, and no worth. Well, I say just the opposite. This woman was a midwife, helping a lot of young unfortunate girls and uppity women in having safe abortions performed. She also provided a liberal education on the functions of a woman’s body because let’s face it: in 1901, women were extremely ignorant about their bodies. More specifically, the mechanics of ovulation and how to avoid pregnancy. Cleary refuses to let Harriet go down a dark path of loneliness and isolation: she is moving in with him and that is that. Cleary is a walking contradiction: the man is built like a horse, has no fear and works as the ambulance driver for the Knick – while sometimes performing other duties, such as being an enforcer of sorts. He’s seen his fair share of hard times and has the street smarts to survive a place like New York City. And yet, the way he clearly cares for Harriet is genuine and loving.  (Cleary certainly had his moments during the episode) Three specific times he called people on their bulls—t. He fooled Thack and Algie, when pretending to be ‘hypnotized.’ The next scene finds Cleary guarding the twins, only to end up asking about a few crude inquiries. His final scene with Harriet in the diner shows his tough nature, but also his concern in wanting to better someone else’s situation with 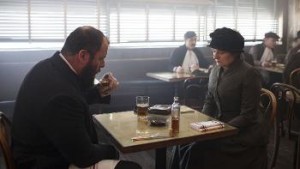 no personal agenda. Cleary is quickly becoming one of my favorite characters and I hope to see more of him in the coming episodes.

Cornelia is still trying to piece together the mystery of what happened to Speight. She has managed to speak to an immigrant of Sicilian descent who was also suffering from the plague. Cornelia just doesn’t get it into her head: maybe she should leave well enough alone. And is it really that wise to enter the apartment of someone who is sick with plague?  When will she learn that she shouldn’t be poking around in things that are none of her business! She’s a wealthy woman from a prominent family and given the fact that she is expected to be a dutiful wife to Phillip, she’s supposed to toe the line. Except that she doesn’t want to (pretty obvious that her marriage is loveless) and that perhaps with Phillip gone away on business, home isn’t very safe (with her perverted father in law in the shadows).

As for the love story of John and Abigail, we see how tortured she is. Feeling lonely and vulnerable, she pines for John but knows that it will only end in pain and suffering. She full well knows that John is a man and has a man’s needs; she’s no fool and understands that they are not together. John is also a wounded soul; his preoccupation with medicine and fame makes for a lonely life. He once had something real with Abigail. You can see she clearly longs for that again but has resolved to get him out of her life for good. That is until John and Abigail share a passionate kiss. Does this mean good tidings? Will John finally clean up his act and forego drugs in exchange for the love of a good woman? Will he be able to balance his professional obligations and personal relationship? Can they have a second chance at happiness?