Everyone at the Knick is a liar. Or, should I say, many of them are experts at putting on a ‘poker face.’ We see everyone here – rich, middle class and poor – hiding something. What is highly amusing to me is how badly the rich put on phony facades. In fact, they’re the ones doing most of the lying in this episode. The only person excluded from this is Bertie. 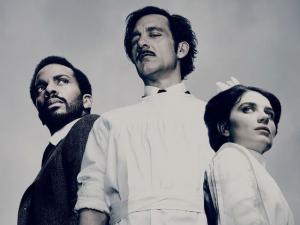 Thack is back on smack. One wonders, is this because he just can’t stay away from the drugs because it clearly does not help fuel his medical genius streak for taking chances on newer surgeries and research, now does it? Bottom line is that he needs to start doing some serious research about the root of addiction and how, if and when it can be cured….in order to appease the Board of Directors (read between the lines its about charging a handsome premium to patients). A wealthy patient of the rehab center Thack was in overdosed on heroin and this is just what he needs – he was correct about addiction not caring what level of society a person was from. However, the opportunity to do testing on a dead body is rife with promise. Not that the parents of the deceased girl are happy about it. The wealthy girl’s parents lie about what their daughter had been up to because, heaven forbid, anyone actually tells the truth.

Bertie, for his part, is trying to fit in at Mount Sinai hospital, where he is the only non-Jewish doctor on staff. He feels he must work his way up the ranks and prove himself to the Chief of Staff, Dr. Levi Zinberg. He catches the eye of Genevieve Everidge – who is a journalist – and a Jewish woman (her real name, Esther Cohen). Another form of deception: Genevieve understands and knows that as Genevieve, she can write articles about medical institutions – and more specifically, Jewish doctors – without looking like she’s biased. She knows that having a name that sounds all-American will allow her a little more credibility. She’s blunt, feisty and Bertie’s opposite. We see the two of them out on a date, getting to know each other. 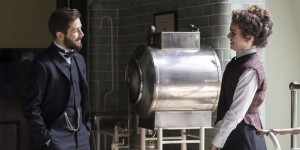 You can cut the tension between Algernon and Everett with a knife. Everett feels slighted by Thack, who is always including Algernon in on the latest ideas and trials. Everett feels that Thack owes him a debt. Thack pointedly tells Everett that his jealousy has no place at the Knick.  Everett is at a cross roads; he wants Eleanor to get better but he can’t hide what happened in the past. Eleanor is an empty shell. Dorothy looks as though she would be perfectly fine taking Eleanor’s place. I think she wants to get rid of her sister, in order to erase the stain of scandal. Everett’s white power and racism is revealed upon attending a reunion with his Penn University alumni. A discussion about how eugenics will be at the forefront on medicine is the topic of the evening. Everett begins to listen as his former classmates go on about immigrants, homosexuals and African Americans are the worst thing for the country. As in, white, rich and powerful men don’t want any competition and want to keep the power amongst themselves. As if there wasn’t already enough fuel on the fire. It seems as if eugenics is the perfect field of study for Everett. Eugenics is all about getting the best genes, the best breeding and making sure that ‘the wrong types’ don’t mix…..you know, heaven forbid that white and black people have a relationship…which leads to Algernon and Cornelia.

What’s it going to take for both of them to snap out of this dangerous affair? We see Cornelia attempting to help Sister Harriet by paying for legal fees and showing up to court. The judge, a religious fanatic, throws Harriet under the bus. A trial is scheduled. Cleary is angry. Cornelia is shocked. Things don’t look good for Harriet (my 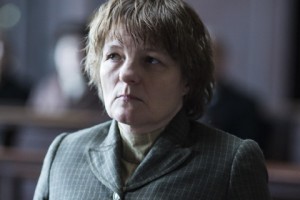 blood was boiling during this scene). The judge has been bought off and Harriet will not receive a fair trial. After sleeping with her husband, Cornelia tries to enlist her husband’s help for Harriet’s cause. Things go horribly wrong and Cornelia starts to see just how different she and Phillip really are. He doesn’t want his wife working at the Knick and doesn’t want her associating with a baby killer. The look he casts her was chilling. Their lovemaking is infrequent and they have no common interests. Their marriage is one of convenience, not love. A high society, passionless marriage: Cornelia married the wrong man. Desperate for money, Cleary smuggles drugs in order to juice up his wrestler, with murderous results. He needs to make cash to help out Harriet.

Getting back to drugs, Thack and Algernon are conducting tests on a pig – the poor animal is injected with a strain of malaria – in order to increase a fever (they start out with malaria and will move onto syphilis). This research is important to Thack for two reasons – one, his is trying to help his ailing ex-fiancée, Abigail, as she is suffering from the ravaging effects of syphilis and two, they are trying to come up with a new breakthrough in how to eradicate syphilis. For 1901, that is HUGE. If they can burn out syphilis that means they can cure a lot of people who are infected. The Board of Directors may not approve of Thack’s unorthodox means of testing and research, but I have a feeling they’d turn a blind eye to the money that would roll in as a result.

Barrow is still slumming with his prostitute girlfriend, Junia. This guy not only skims money from the various construction trades for the new Knickerbocker hospital, he just can’t stop scamming his way at work. The man is thick in the head. A reunion with Bunky’s former partner sets the record straight. So, not only is Barrow in deep with Ping Wu, he’s also in deep with Bunky’s former colleague. Let’s just throw in that Barrow has delusions of grandeur and wants to take up with his lady love, Junia. I think Junia is playing him for a fool. Lucy is being pursued by Cornelia’s brother, Henry Robinson. Seems like Henry is a bit of a player. Lucy, nursing a broken heart and not wanting to be another man’s plaything, wisely rebuffs the advances. She puts it out there that if Henry led a Christian life and made time for the Bible, maybe, just maybe, something could happen further down the line. Henry is trying to become his own man, investing money into the New York subway and trying to break free from under his father’s powerful grasp. Wealth and women have probably come naturally to Henry, so Lucy is now a challenge to him. We find out that Lucy has bigger problems. Lucy’s father is another liar. His preacher role is nothing but a scam – as he says, “The worse people feel, the more they give.” Great. So, under the guise of religion, this man is making a profit. But it’s what comes up during one of his group confessionals that reveal his sinister side: Lucy confesses all her wrong doings. Humiliated, disgusted and ashamed of his daughter, he slaps and beats her with a belt. A.D. Elkins is nothing but a scam artist and a bully, an abusive father using the guise of serving the Lord to mask his true nature. No wonder why she moved far away from him.

Perhaps the biggest bombshell of the episode: SPOILER! Algernon has a wife. Yes, that’s right: a WIFE. Who has come from Europe and found Algernon’s parents (who work for the Robertsons). OH MY GOD. The look of fear and shock on Algernon’s face – his parents lament that they should have been told and that this ‘wife’ of his is up to no good. We don’t know what Opal is after. We don’t know what was going through Algernon’s mind when he thought his past wouldn’t catch up to him. Again, more lies, more facades and more mystery. Only this time, this is one lie that has actually caught up with someone in the flesh. Now time to scrub up for the Post Op.

This proved to be one great episode. It is one of the best of the best…well you get it. Now get a glimpse of Episode # 14 “Wonderful Surprises.”