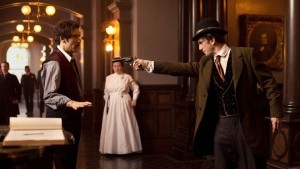 Is there a cure for a broken heart? And why do bad things have to happen to good people? We all waited with baited breath for the other shoe to drop. Of course, just as things started to look good for several characters on The Knick, the heavy hand of fate stepped in to remind them that well, things were looking a little too good and our folks at the Knickerbocker needed a cold dose of reality. As if the last episode wasn’t enough?

This week we see the after effects of one of Thack’s patients, who was struggling with addiction: the man overdoses on medical fluid and is found dead. Slimeball Brockhurst has come to claim his property with a loaded gun – in which we see Thack do some smooth talking and Cleary come out swinging – literally – with that hard wooden bat. Well, that’s the start of what looked like an exciting day at the Knick. A consultation with a former patient reveals the need for reconstructive surgery on her nose and Thack will do it for free. Thack has come a long way – he’s avoiding drugs, relying on his medical skills and the love of a good woman, Abby. In speaking with another patient who is addicted to alcohol, John has Abby come in to speak with the patient; perhaps her soothing demeanor and heartfelt words can help the man in overcoming his alcoholic dependency. It occurred to me that in watching Abby speak to man about his dependency, w 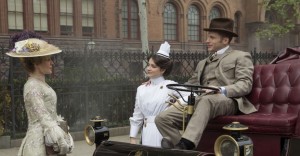 ell, isn’t this the first instance of the practice of psychology?

Cornelia and Henry discuss her current findings – in a restaurant where she is careful to reveal that her father in law is having her followed, but doesn’t say the rest of the sordid stuff happening. She shows Henry what’s been going down, with respect to the sick passengers and how their father is apparently paying off immigration people to look the other way, so as to avoid paying big fines. It’s Henry’s reaction that make me truly wonder: is he involved with this scam or has he also had the wool pulled over his eyes? Like I said, this would eventually come back to haunt Captain Robertson. Speight was investigating where the plague was coming from – more to the point from who’s ship – and he ended up getting killed for it. Cornelia and Henry are not safe with the knowledge of the pay-offs and how this affects them remains to be seen.

I’ve been saying for a while now that Karma has a tendency to sneak up and rear its head when you least expect it. Looks like Nurse Elkins’ father has been struck down – a stroke – while he was in a dingy brothel. Even the lighting and the surroundings in that scene make the place feel dirty and abhorrent. John and Lucy discuss his situation – and I feel that Lucy is now in a position of power over her abusive father. Seems that the preacher didn’t live the life of a God fearing, bible thumping moral parishioner – do as I say, not as I do. Wonder how Lucy will use this to her advantage because, let’s face it, there’s nothing like having power over someone who has previously hurt and abused you. 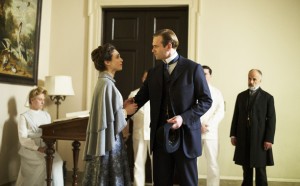 As for Eleanor and Everett, things looked pretty promising – they make love for the first time in months – and the next day they are talking about expanding their family. Dorothy will be going home to the Walker family back in Philadelphia – yet, note how her eyes linger on her brother-in-law with more intensity – like I had predicted many episodes ago – there’s been a growing attraction and we see just how messy the lines are blurred. Remember Doctor Cotton and how he left the Gallinger household, claiming to not feel well? Poison. Eleanor admits this in the privacy of the kitchen because after all, Doctor Cotton basically butchered her and in her own words, “I’m not well at all.” Stunned, shocked and with no other recourse, Everett has her admitted to a high end psychiatric home for her to live out comfortably for the rest of her days. One brokenhearted wife is gone, only to be callously replaced by her sister. Everett sure knows how to keep it in the family. 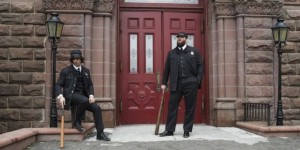 On to the next casualty: surprisingly enough, it’s Cleary. In what was one of the most brutal rejection scenes at the Knick, was that of Harriet and Cleary. I really wanted these two to get together. I mean, they complement each other in so many ways and you could see the begrudging respect they had for each other. Cleary is not a man to show vulnerability: so it was kind upsetting to see Harriet reject him. They’re working hard on their prophylactic side business and living in close quarters, so it was only natural to assume that perhaps this rough and tumble man and this quiet and hardworking ex-nun would develop genuine feelings for each other. I think Harriet is scared of her own feelings: she took refuge in anger, yelling and rejecting Cleary on the spot. Come on, Harriet! You’re not a nun anymore! You’re a flesh and blood human being, with feelings, hopes and dreams! I think they would be an excellent match….but we’ll have to wait and see if Cleary is going to take this rejection very well or if Harriet will come around and accept that she has feelings for the man.

And then there’s this asshat – Barrow. Seems someone called Effie Barrow ‘accidentally’ leaked information about his other apartment. You know, the love nest for him and Junia? Yup. Barrow wastes no time in getting to the point that he’s selling the house, because he has to pay for his membership to “the club” and what better way to get into high society than kicking out your wife and children and taking up with a former prostitute? What a lovely way to end that evening. Two people left upset and brokenhearted.

In one of the rare moments of progress, we see Bertie showing Thack about adrenaline. It was actually nice to see Bertie bringing in some new medical knowledge, and perhaps that new-found knowledge can be used on patients or in surgery, when the need calls for it. As for Algie, the man has discovered the eugenics surgeries 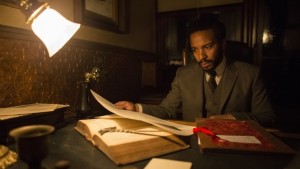 that Everett has been performing in secret. While morally wrong and the patients were not of age to give informed consent, Thack can only look over the findings with disgust but legally cannot do anything, as they were not performed at the Knick. That has to be upsetting for Algernon – this is just another way for Everett to abuse his power as a physician. Algie is also concerned about Thackery’s stomach pains and wants to investigate further. Being the stubborn ass he is, Thack rejects Algie’s notion to examine his stool. Okay then, someone shows concern about your medical well-being and you blow them off. Good call, John.

And, in what is one of the worst things to happen at the Knick: Abby dies on the operating table. WHY?! Abby placed a couple of drops of laudanum in water and ingested it before the surgery. Fairly routine, right? After being prepped on the table, Abby quickly goes into cardiac arrest. What was supposed to be an easy surgery turns into shock, grief and dejection. Why did this have to happen to Abigail? You know that this huge hole can’t be filled…..and for John, there’s going to be one way to get through it and its drugs. In matters of the heart, nobody at the Knick is spared. We conclude with Post-Op.