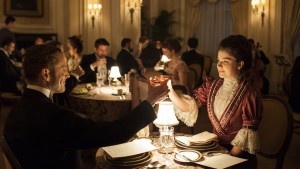 I knew that Henry Robertson was a rake, a philanderer. I knew that his money gave him a sense of entitlement, after all he’s plowed through all the nurses at The Knick. All but Lucy Elkins who is seen repeatedly rebuffing his advances. Another nurse though, Daisy, foolishly allowed herself to be recorded – this is the first time we see what would appear to be soft core – in a simple black and white movie of this woman nude. She poses playfully for Henry, unaware that he now showing it to his equally wealthy, entitled friends. What a pompous ass. Karma has a tendency to catch up with jerks like this. But speaking of catching up and before we go further here is a chance to check our look at the previous episode if you missed it.

Moving on, The Knick has its’ hallways and rooms filled to over capacity due to a subway tunnel explosion which means it’s not business as usual for the Knick, but hectic as patients are being carted in at an alarming rate. Cleary tried to score some extra profit with all the bodies coming in but he just can’t catch a break. Henry decides that not one person will be charged for any surgery – guilty conscience plaguing you, Henry?! Never mind the excuse of ‘civic duty’ because we all know he went behind his father’s back to invest in the subway. Little hints here and there indicate that the Robertson shipping business is not as prosperous as it used to be; it seems their wealth is slipping slowly from their grasp. Barrow doesn’t agree with not charging a fee for the patients of the subway tunnel explosion. Barrow has been robbing Peter to pay Paul. He may be free of his debt to Ping Wu, but that doesn’t stop Barrow from getting in over his head – again – by making an offer to buy out Junia from the brothel business. But you go ahead and pay that $7000 for that apartment on Park Avenue so you and Junia can live together in idle bliss. Getting into deeper debt is always a good idea, said no one ever! 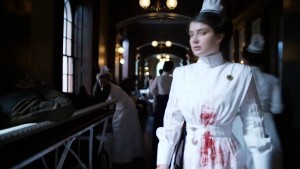 During the crisis at the hospital, we can give MVP to Nurse Lucy Elkins. Her cool under pressure professional treatment and assessment of the situation shows how she has grown both personally and professionally; this is not the same little country naïve girl who we saw from the previous season. She’s been reading plenty of medical textbooks, performing the weekly physicals on Ping Wu’s prostitutes and picking up a delicious tidbit or two, about on how to control men sexually. Let’s just see how Lucy explores that alternative, shall we? Lucy puts on her best poker face and coolly rebuffs Henry’s blatant come on lines but allows him to take her to dinner. She sees through his lines with ease; and I really hope that she finds the means to use him to get what she wants: medical education and payment for the tuition fees. About time a woman used a man to settle the score, in my humble opinion.

In other plotlines, Harriet is still surviving in the dreary day to day conditions at the house for fallen women. The treatment she receives is harsh – and it makes me hope that Cleary is going to bust in and take her away from there. Another option is that Harriet is going to lay the smack down on that nun with the condescending attitude. Bring it. Since when was it a sin to educate a woman about her bodily functions?! And if it weren’t for Harriet, there would have been a lot of botched abortions and many dead women.

Bertie is still researching a possible procedure for his mother’s throat cancer and turns to Algernon. After finding a medical paper with published results on treatments for throat cancer, he goes to Zinberg and is promptly shut down. He approaches his father with the medical research and finds his father receptive. The family is introduced to Genevieve and her Jewish heritage is brought up and is accepted. Bertie is quite serious about his love for Genevieve. I have a feeling that Bertie will be going back to The Knick – Thackery was always cutting edge and didn’t mind incorporating new surgeries.

Speaking of which, Thack’s brain surgery in the medical theatre held promise – trying to find which portion of the brain controls addiction looked like a good idea. But the thing about a lot of medical experiments is that it was a 50/50 chance of success. We see how far Thack is willing to go to achieve this success – much to the expense of the patients who is being experimented on. His radical medical research made a heroin addict into a vegetable. It’s not as simple as Thack had thought – you know, wiggle around in the brain with an electric probe and “X marks the spot.” The use of an electric probe is interesting for the time – as a medical tool, it may be able to help doctors find out where certain parts of the body react to stimulus or where metal is lodged inside the body. The issue is that because using a new tool requires trial and experimentation, you just know that there’s going to be an awful lot of mistakes made and patients are going to suffer the consequences. What about the patient? Do they not get a say in the quality of their care? 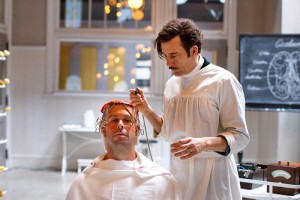 At one point, another option is presented on how to help cure addicts – sterilization. Algernon is not impressed, nor is Thack. An encounter with some of Everett and his Penn State buddies leads to a meeting between several doctors, trying to discuss the plight of American people. You know, how awful it is to know that there are filthy immigrants coming to the country; having way too many children; bringing disease with them; and how their lack of breeding and class lower the standards of American society. Sterilization is the answer to making sure these lower class types stop polluting the population. Somehow, someway, Gallinger is determined to make his mark and finds the means to start using the procedure. If he can’t start at the top of his hit list, he’ll start from the bottom. His medical talents are now being used for ill-gotten gains. Shame.

How is The Knick going to take this type of news? Thack already has to prove himself and earn back the trust of the Board of Directors and the staff. Gallinger performing sterilizations is not only unethical, but not something I think the Board would approve of. I don’t think they would want another stain on their reputation. As for Henry, I wonder what would happen if the Board found about his little homemade movies? And Daddy Robertson would be extremely upset upon finding out his son invested in the subway.

There’s an awful lot of corruption and abuse of power going on; and with wealthy men like Henry and Everett participating in the abuse, will they ever get caught? Will the corrupt get caught? Will they suffer the consequences of their actions? Only time will tell, but it is exciting to see them connive and toil. Here is what the Post-Op has to say –

and what we have to look forward to in Episode # 16 “There Are Rules.”