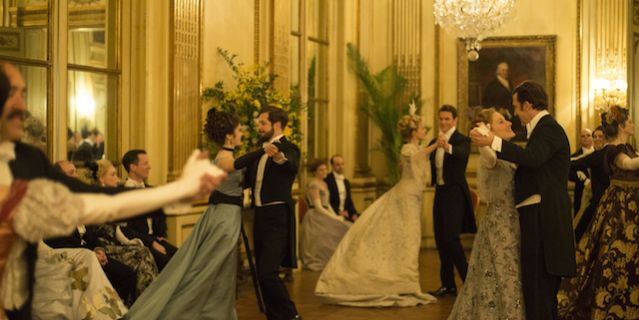 Dr. Thackery finally performs the revolutionary surgery on the conjoined twins. It was a success and he and the team were to be commended. The operation was also recorded with the rudimentary motion picture camera. Here is more detail on that scene with the Post Op clip:

Note in the episode how Lucy wondered how the other pretty blond nurse knew that Henry Robertson had a camera. Kind of hoping that comes back to bite Henry in the ass. More on that later. Thack has a moment of insecurity and almost gives in to cocaine, right before the surgery BUT he calls Abigail instead. This is what we want to see for our man: a comeback, a renewed purpose in his personal and professional ventures. That call from Abigail gave him the confidence he needed to go in, be a man and perform the surgery drug free.

In this episode, we are privy to three sexual encounters. One is loving and awkward; one is hurried and brusque and the last is a fever pitch. We see Bertie and Genevieve have their first awkward sexual encounter: the fumbling in the dark, the dim lighting, the laughter and joking around. It was nice to see two people nervous and shy around each other. Perhaps this is the start of a long and fruitful relationship. In complete contrast, we see the next one with three people. We also get a glimpse of Ping Wu sampling his wares (having sex with one of his prostitutes) when we see someone inserting their foot into his mouth – Lucy. I just about jumped out of my chair. OMG. I was hoping that sordid relationship was over, but apparently it’s still on. Ugh. The third one takes place after the Knick fundraiser, so we’ll get to that one in a bit.

Cornelia’s private investigation activities have taken a turn for the worse: she’s come to understand how and why sick immigrants are slipping through the cracks 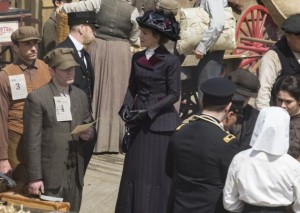 during immigration. In what could be a huge financial liability to her family, it seems that backroom deals are being made. You know, so nobody needs to know where these people are coming from, in exchange for Robertson shipping company men to look the other way. Looking the other way costs money.  Cornelia has now, however, stumbled into something dark and insidious, whether she likes it or not. The question is, what should she do next? Report the corruption and risk her family’s shipping line? Or stay quiet with the hopes that none of this will ever come to light? Either way, her family’s business and fortune are at risk. To make matters worse, another uncomfortable run in with her father in law makes her skin crawl. Daddy Showalter has had her followed by a private investigator. The man is incensed. His primary focus is that she stops having her own interests and start behaving like a proper lady would. In other words, provide grandchildren. NOW. Disgusted at being handled so, Cornelia pleads to get the hell out of the Showalter mansion. Phillip is deaf to her cries. The shocking truth is that without the Showalter money, the Robertson’s will face financial ruin. Great. Nothing like having a lecherous pig for a father-in-law and an unsupportive husband. And you know, things will go from bad to worse for Cornelia. It’s only a matter of time before something happens with either her father, her brother or maybe something from the past comes back to haunt her.

Harriet has been giving young ladies lucrative information: tips and advice on how to prevent pregnancy and venereal disease. Cleary comes home and after the women leave and the two speak frankly. Cleary proposes that Harriet and he start making some money from this. After all, knowledge is power. And if people are in dire need of birth control, they’ll pay to know the proper information and they will also pay for the proper products. I’m really hoping this business venture makes them money. I don’t see it as morally wrong: after all, they are providing an education service to people that need it. Do you want to help people or do you want to keep them ignorant? Ignorance

Lucy ends up bedding down with Henry. I’m not sure that I enjoyed seeing how quickly she allowed herself to go to bed with this man. I was hoping she would lead this man on for a very long time, while wheedling out money or securing a higher education for her. I really want to see Henry get taken advantage of and I would really like to see Lucy be the one who has power over him. However, it looked as though she did have the sexual means to keep him interested: cocaine. He looked like he was having a damned good time, if you ask me. Have to wonder what Lucy’s end game is with Henry. Will she be able to hold him down? We all know that sex can be used as a means to manipulate a person. It can also be withheld as a means of power. Does Lucy truly understand how to use sex as a means of getting what she wants?

While many of the characters are enjoying themselves at the fundraiser, it becomes quite clear that not everyone is on a level playing field. First, Cornelia attempts to warn Lucy not to become too interested in Henry (read between the lines, she’s only a nurse and Daddy Robertson has expectations of which high society lady will marry his son). I like Cornelia, but the way she spoke to Lucy was a bit demeaning. Lucy is a grown ass woman and capable of doing her own thing. Maybe Cornelia is somewhat jealous that Lucy has freedom, where she does not. At the end of the evening, Algernon is crushed in finding out that he has no future at the new Knick hospital. Promises of championing him are made from Captain Robertson but we all know talk is cheap. Talk about having the wind being knocked out of you. With his future looking bleak, stressed out about the way the hernia operation with DW Garrison Carr was handled and his detached retina still plaguing his mind, Algie is a man beaten. Algernon has truly been reminded that even though he is a great doctor with keen medical talent, he is still beneath the wealthy, white benefactors that make up the Board of Directors (and the donors) at the Knick.

Everett continues to climb new lows: swiping Curare and concentrating it to the point where it’s lethal and then switching bottles while in the operating theater are the ultimate high for him. It makes Algie look incompetent and untried, especially in front of his peers and other members of the hospital. Everett comes to the rescue and makes himself look like a concerned physician. What a two faced, racist ass. This man is so keen to usurp Algernon, that he will use any means at his disposal. All for the sake of looking like the white knight on a steed. We all know that Everett Galinger is about high society: the gentlemen’s club he attends is posh, his wife’s family comes from a wealthy family from Philadelphia and how abhorrent lower class citizens are to him. He needs to get back on top at the Knick in order to seize his own kind of power; he needs to abuse his control and it doesn’t matter how many people are demeaned or discredited. Sabotage is just another way for him to look good – and to make Algernon the lowest man on the totem pole and because Algernon is an African American man, Everett wants his kind gone for good.

Everett is just another racist bigot looking for power and control. Algernon is a man who just looking for equality and respect. Lucy wants power by any means possible. Cornelia has none, which must frustrate her. Thack is slowly seeing the benefit to abstaining from drugs and staying with Abigail. Security and self-confidence radiate from him.