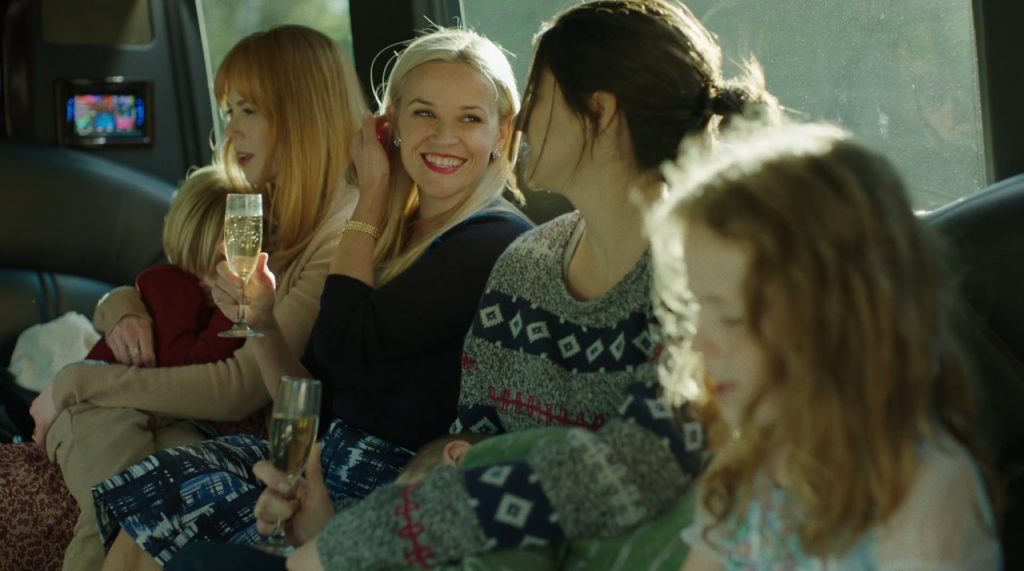 Big Little Lies has been a genre-bender since the start. It is both eloquent and shallow, juxtaposing existential statements with superficiality and masked behavior. “Living the Dream,” as the episode’s title, is a clear representation of this. We arguably see the darkest segment of the series at this episode’s end. As someone who has not yet read the novel, I believe the show is evolving with wondrously macabre mystery under the guise of a cliché story about rich white women. Jane’s reminiscence of her sexual assault made “Living the Dream” a very difficult episode to digest, which was horrifically yet phenomenally executed. Now to break down this week’s highly character-driven episode.

This episode highlighted Madeline’s narcissism and stubbornness for the sake of what she seems to define as her own dignity. (The same can be said for Renata.) Madeline purchases tickets for “Disney on Ice: Frozen” to spite Renata and take six little girls with her, depriving Renata’s little girl of having several of her best friends at her birthday party. What ensues is an embarrassment on both Madeline and Renata’s part, with Madeline desperately forcing wine and faux-euphoria down the throats of her posse while Renata danced “seductively” at her daughter’s party. The societal and ethical projections these women have of themselves are psychotically delusional and self-involved. I’ve been hoping since the start that it’s Renata who is murdered, but it would be too happy for the series, and I have a feeling this story will end with much more of a horrific shock.

Aside from her incessant passive-aggressiveness with Renata, Madeline also has to deal with her daughter’s decision to live with her father. Honestly, can anyone blame her daughter? Sure, Ed caused quite the quarrel, but this goes much deeper than that. Madeline’s behavior is clearly having a detrimental effect on her daughter’s mental health. In prime Madeline form, she turns the entire ordeal into herself, going as far as telling Ed she wish she had cancer for daughter to stay. Eventually, she comes to terms with the situation, leading to a heartwarming conversation with her daughter as she packs up. Still, knowing Madeline’s psychological stability thus far, this probably won’t end well. She quite literally pulled over for several seconds to sob in her vehicle. This isn’t normal behavior.

“Things can just get a bit volatile.” 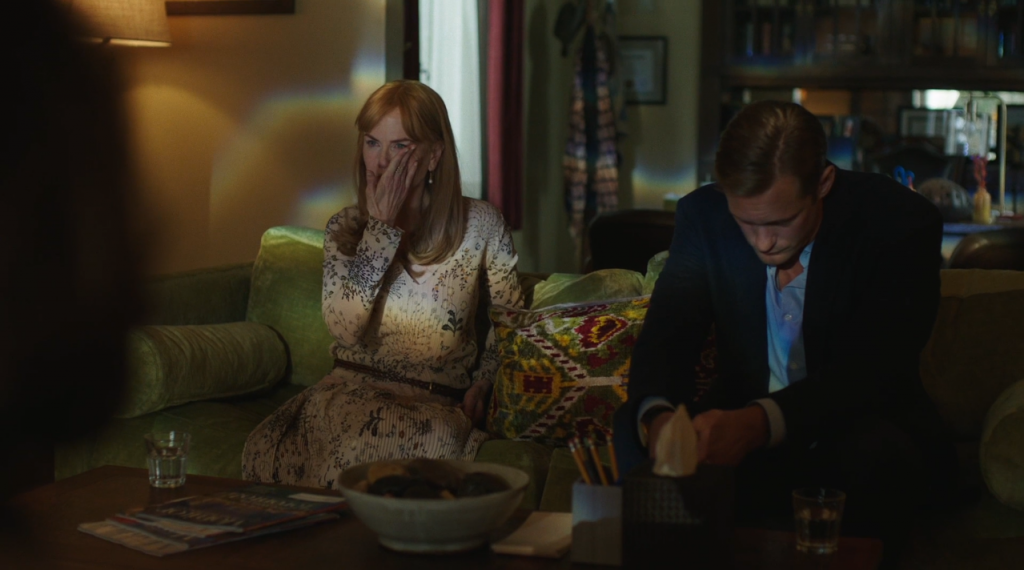 Celeste and Perry’s therapy session has by far been one of my favorite segments of the series thus far. The emotion felt raw and real as they get into “the line between passion and rage” they straddle. Celeste sums up the situation perfectly by saying, “We get angry, we fight, and then we have this crazy, angry sex, and then we make up, and it’s all better. And we have this dirty secret.” Essentially, calling domestic violence a “dirty secret” is Celeste’s way of normalizing the behavior, which (as an upcoming counselor) should have been analyzed more by the therapist, but I digress. Celeste and Perry may love each other, but they are toxic together, and it has been repeatedly stated by interviewers that Perry is not emotionally stable. I could picture Perry being the killer, but this also seems too obvious for the series. Regardless, Nicole Kidman and Alexander Skarsgård continue to be, in my opinion, the most morally profound and challenging aspect of Big Little Lies thus far. Their dynamic is emotionally-charged and disturbing. However, it must be stated that Shailene Woodley probably had the most disturbing and emotionally draining segment of the series in this episode.

“I was actually afraid that he would kill me.” 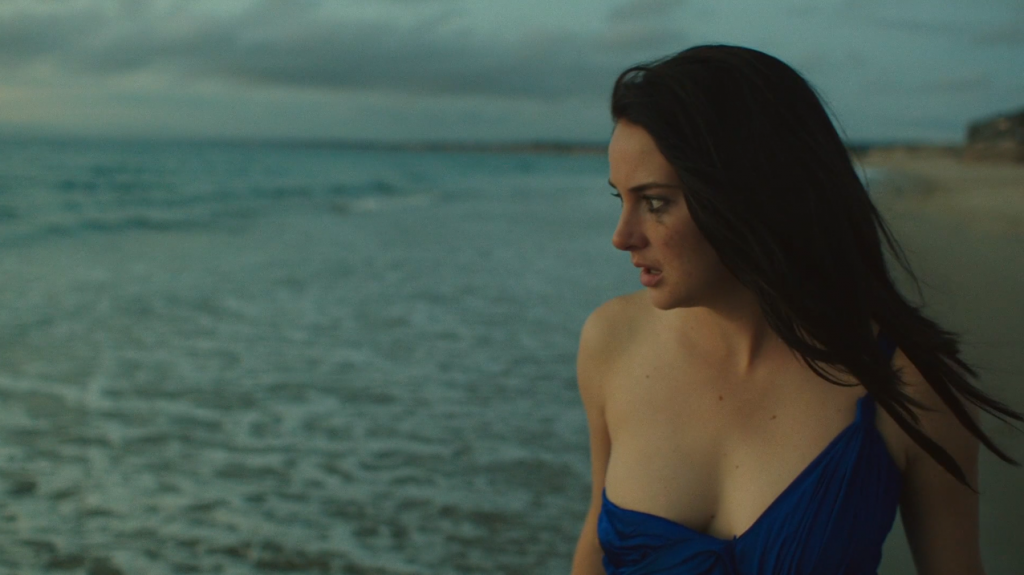 The end of this episode was gruelingly difficult to watch, and I can’t be the only one who felt this way. Jane’s recollection of her rape was a brutally emotional blow and distressing representation of where she has come from and is trying to escape from. Things have not gone well for her, despite her blooming friendship with Madeline and Celeste. She retells the story of her sexual assault to Madeline, and the entire segment is filled with flashbacks that are both uneasy and cinematically beautiful: Jane running through the beach following footsteps in the sand, make-up running down her face, and ultimately cleansing herself of the experience in the ocean. The juxtaposition of beauty and brutality has been constant throughout the series thus far but has been executed best with Jane’s recollection, and it doesn’t end there. Jane then has a psychotic hallucination of someone breaking into her home, displaying her mental instability and post-traumatic stress likely from her sexual assault. However, she defends her son to the end and has proven herself to be a strong individual in the face of adversity and horror. 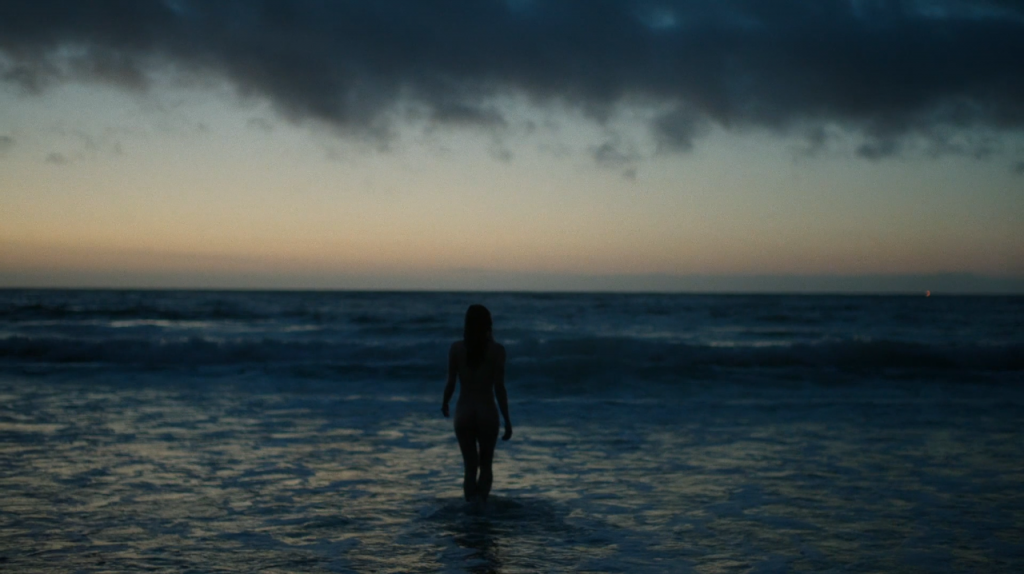 Big Little Lies is shaping up to be a darkly beautiful piece of television. Its use of interview integrations blends into the series fascinatingly and effectively, giving tiny pieces of the puzzle we must put together. The major standouts of the week are Renata stating she’s going to kill Madeline. As an aforementioned argument, this seems too obvious and outlandish for the series, but everything must be taken into account. This includes statements like “Madeline had anger issues” and “We still don’t know the truth about Jane.” We’re being bombarded with hints that are likely red herrings, and Big Little Lies likely won’t give the big reveal anytime soon. As grueling the wait, I will be sticking around every Sunday night.

Here’s a preview for next Sunday’s episode, “Push Comes to Shove,” followed by a look inside “Living the Dream.”