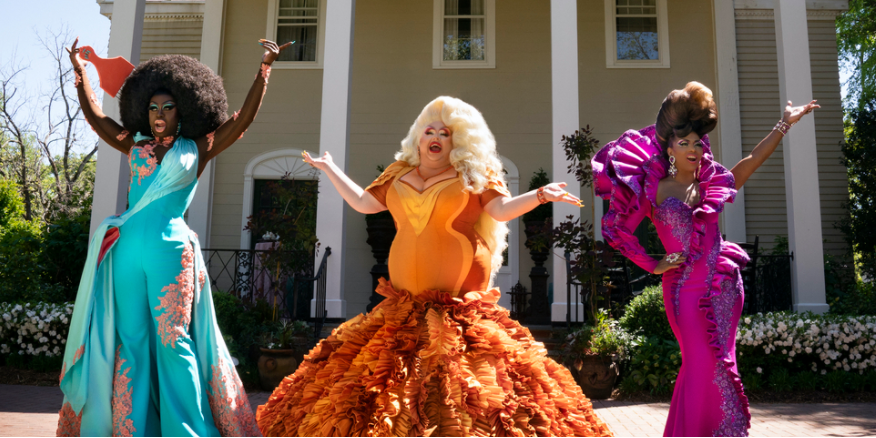 You can’t miss’em. The WE’RE HERE queens are back on HBO beginning MONDAY, OCTOBER 11 at 9:00pm. An official press release states –

Debuting on National Coming Out Day, this season follows renowned drag queens Bob the Drag Queen, Eureka O’Hara and Shangela as they continue their journey spreading love and connection across small-town America, through the art of drag. As the queens recruit local residents from Spartanburg, SC, Temecula, CA, Del Rio, TX, Selma, AL, Evansville, IN, Watertown, SD, Kona, HI, and Grand Junction, CO to participate in one-night-only drag shows, they inspire their “drag daughters” to express their genuine selves in front of their families, friends and communities.

Described by Salon as “a show about loving — truly loving — your neighbor,” the first season was lauded as “genuinely moving” by the New York Times, and “pitch-perfect” by Entertainment Weekly.

The Emmy-nominated unscripted series WE’RE HERE returns for its eight-episode, second season MONDAY, OCTOBER 11 (9:00-10:00 PM ET/PT). Episodes will debut weekly on HBO and will be available to stream on HBO Max.

The series pulled out of production due to the pandemic and never got to do their thing in Spartanburg, South Carolina, but it looks like they return to finish what they started at that locale and even manage to offer up their style of fun in Hawai’i this coming season. For those excited for it they are strutting, posing, primping, twerking and working it for another season. Hey, put your differences aside – this is all about empowerment, all about building confidence, all about making everyone feel good about who they are. We feel empowered to give some sort of season recap after the sophomore season airs. Bob the Drag Queen, Eureka O’Hara and Shangela bring it? Do you? Find them Monday nights beginning at 9:00pm beginning on 10.11.21.