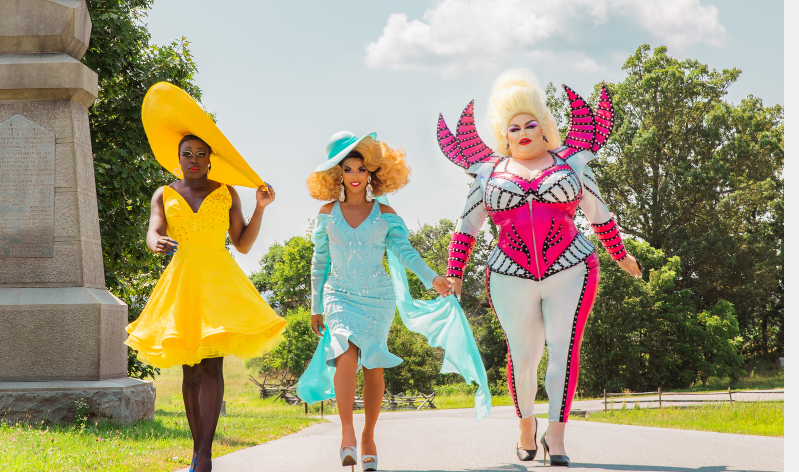 They came, they saw and they empowered those left in their wake. They are Bob The Drag Queen, Shangela Laquifa Wadley and Eureka O’Hara. If you’re like me, you didn’t know who was who; Bob is the tall black one, the energetic, compact one is Shangela and the big, bold one is Eureka and they just shook us up with their drag queen extravaganza called WE’RE HERE. It has been granted a second season.

Each week for a total of six episodes they showed up in a small American town and found some eager players for a big old drag queen fest. They found willing participants in each city to perform a lip-sync & dance routine with the drag divas. And they sis it in full drag, complete from head to toe and with additional dancers thrown in at times. What is key to note here is that this is not a show about staging a number just for the theatrical thrills, but a show about empowerment. Just respect it. I’m not anywhere near that orientation and I can respect that. You don’t have to be of the culture to understand, especially in the crazy social climate right now, that a boost of confidence and pride can carry one far. I’ve seen enough clips & scenes of WE’RE HERE to embrace that.

Bob the Drag Queen, Eureka O’Hara, and Shangela Laquifa Wadley arrive in Gettysburg, Pennsylvania to put on a one-night-only drag show featuring locals in need of a little support and empowerment, including: Hunter, a young, gay make-up artist yearning for a deeper connection with his father; Darryl, a local college admissions officer hoping to tell a story of race in America while being an effective ally to the LGBTQ community; and Erica, a conservative Christian mother eager to reconnect with her estranged daughter Hailey, who recently came out as bisexual. Directed by Peter LoGreco.

Each week they pull into town and strut the main street and surprise the locals. This clip gives a great sense of what goes down as they arrive:

Bob, Eureka, and Shangela head west to Twin Falls, Idaho, a conservative, predominately Mormon community in Magic Valley. There, they meet Michael, Owen, and Amelia, a group of local drag artists who need help forming a community. In order to do just that, the queens work with: Clifton, a young, straight musician trying to make amends for his past by testing his definition of masculinity; and Brandon, a trans man, and his wife, Mikayla – high school sweethearts from religious families – who are looking for the wedding experience they didn’t have the first time around. Directed by Peter LoGreco.

One thing to understand is this is not just about people becoming out & proud. There are also straight people involved in the experience. Their reasons become clear just as much as those from the queer community. Here is an example from this episode:

In Branson, Missouri, a wholesome showbiz town smack in the middle of the Bible Belt, Bob, Eureka, and Shangela help three locals struggling to be their true selves in a community that prides itself on its traditional, religious values. Among them are Tanner, a young actor questioning whether it’s possible for him to be both Christian and gay; Charles, a classically-trained dancer who wants to show that he’s not just out, but proud; and Chris, a father grappling with mental health issues who’s determined to embrace his emotions for the sake of his daughter. Directed by Peter LoGreco.

It is not all hard work, they have fun also, even when procuring a venue for their show:

The queens’ journey into the desert to help the residents of Farmington and Shiprock, New Mexico foster unity and open-mindedness. In the process, they enlist: Nate, a gay, indigenous photographer eager to make a deeper connection with his Navajo people; Nicole, a proud lesbian, public defender, and local LGBTQ activist who’s constantly misgendered because she wears “men’s” clothes; and Stacey and Jasmine, a mother-daughter duo processing the traumatic suicide of their beloved daughter and sister DJ, who struggled with not feeling accepted as a lesbian in her community. Directed by Johnnie Ingram.

The Queens get out there and talk to those in need of direction, hope and empowerment. Shangela connects with Nicole in this episode:

Bob, Eureka, and Shangela head south to Ruston, Louisiana to shake things up for a small town that’s in need of some change. Among their drag children are: Jose, a young gay man tired of censoring himself in order to gain respect and acceptance from others; lifelong Ruston resident Stacy, an ex-firefighter and straight ally dedicated to using his influence to make his LGBTQ community members feel welcome; and Lynn, a tenacious, proud lesbian who – despite the loss of her left arm and leg – is ready to reclaim her independence and dust off her old cowboy boots for her drag king debut. Directed by Peter LoGreco.

A lot of work goes into the staging of a drag show. It goes from concept, to design to make-up  costume and rehearsal time This clip gives you the idea:

When COVID-19 disrupts their production schedule, the queens do what they do best: they make it work. Featuring some never-before-seen performances, Bob, Eureka, and Shangela reflect – from the comfort of their homes – on how drag changed, and even saved, their lives. As the queens explore WE’RE HERE’s impact, they shed new light on the life-changing experiences they’ve had traveling across the country and meeting local LGBTQ community members. Directed by Peter LoGreco

It all builds up to performances. I offer two here. Episode 6 was cut short so there were no showcased queers in it. Instead, the Queens told if their journeys from the safety of their own homes after the pandemic struck. So, we give you a performance from Episode 4 and a final video some pf the cast of Season One put together.

We are not sure when Season Two of WE’RE HERE will get before the cameras or where they will go, but perhaps they should just pick off where they left off in Spartanburg, SC. In the meantime, there is Season One to inspire those who need it. Find it on HBO.