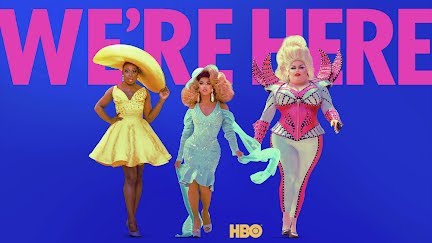 When I signed up to review We’re Here, I knew nothing about it and hadn’t seen the first season.  But I’m often one to throw my hat into the ring for things outside my wheelhouse so I went for it.  And queen, I am so glad I did.  While We’re Here is mainly a drag show, the underlying tone of love and acceptance had me crying every episode over something.  The LGBTQ+ community fights so hard to be equal and heard and safe.  Even just safety is precious, so when three fabulous personalities come to town and create a safe zone for people to be themselves the gorgeousness really flies.  It doesn’t matter who you are or who you love, everyone is welcome as themselves and what a beautiful thing that is.  Running the show are Eureka O’Hara (David Huggard), Shangela (DJ Pierce), and Bob the Drag Queen (Caldwell Tidicue).  Each episode, they roll into a somewhat conservative town somewhere in America and serve up some hot musical numbers and fierce fashion looks. 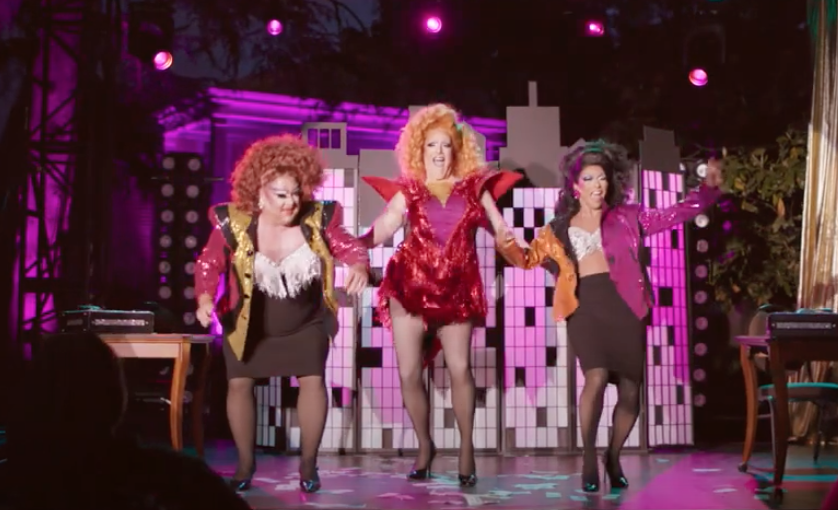 Right away as we roll up, the camera shots of the trucks let us know there is incoming fabulousness!! Production for this series was interrupted by Covid, like much else.  The gang came back around and checked-in and got ready to werk.  Gender fluid Noah, lesbian Faith, and straight yet supportive brother Olin show up at a reclaimed plantation and serve some hot lewks!  It’s nice to see the reconnection after quarantine but also the power of a woman of color reclaiming destructive history.

Wine country certainly seems like my kind of spot, but for those who are different it’s a bit rougher.  James, a trans and autistic out youth wears his pride very openly.  Jake and Brad, a married gay couple feel acceptance at home with mom/MIL Michelle, even if she is a faith influencer but less so in the community.  Andrei, a gay Filipino young man has very little acceptance at home.  Though Michelle feels uncomfortable fully participating in the drag event, moments with Andrei reinforce how important it is when families are accepting.

The queens roll up serving football style and Tex-Mex vibes.  Bruno, the out mayor of Del Rio, wants to bring more acceptance and love to the community.  Joey feels like acceptance in his family is rough, though they are only really asking for time to process and get used to what they need to be for Joey.  Esael is ready to show his family who he is and comes out to his family the night before the show when explaining what the show is and his part in it.  But arguably the best part of the episode was Bob the Drag Queen announcing a certain spot as the official gay bar of Del Rio.

You can feel the history in this episode.  How could you not in a place like Selma?  A place so essential in the story of rights in this country, especially to people of color.  There we meet Akeelah, a trans woman; Joseph, a gay man; and Deborah, a gran needing to put herself first.  I sobbed buckets hearing the women recount their stories of the bridge crossing and Bob connecting with those who came before and paved the road.  How have we come so far and yet not far at all?  Bob’s wig showdown was the highlight of the episode especially meeting his real niece.  What an seriously cool story for her to tell when she grows up! 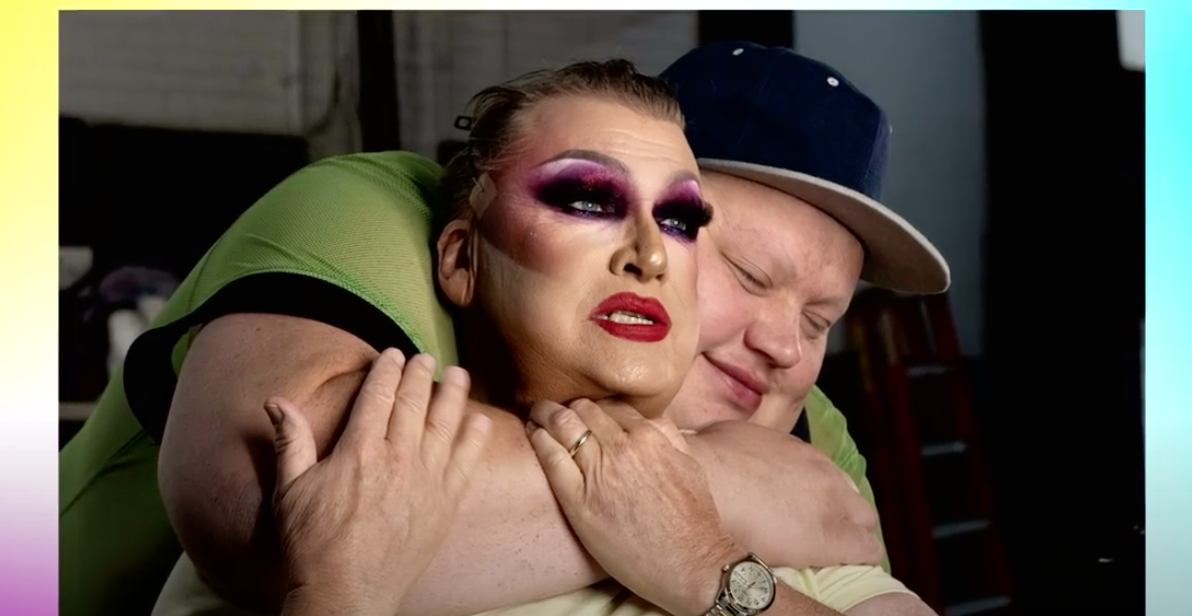 It’s America’s birthday in this episode and we see some hot patriotism action!  The wardrobe in this show is seriously off the chain.  So many just utterly stunning gowns and outfits, especially for the musical numbers.  I’ve never been much of a fashion person, but this show is making me want to be.  Here we meet Barbara and Yvon, older lesbian women who have been together for years and now want to get married since it has been legalized.  Their whole real wedding was the cutest.  We also meet Kais, a gay Muslim man who sought refuge here in America.  Staying in his home country could have meant potential death for who he is.  We also meet Craig, a straight pastor who wants to open his church to be more accepting, especially of pansexual individuals like his daughter.  From the get-go the church wouldn’t even let them film in the office and I sensed trouble down the line.  Just yesterday, People reported Craig has been “relieved of his pastoral duties” and while he and his wife are still in their home, that will only be until February.  While the GoFundMe has already surpassed the limit, you can donate here if you’re interested in helping this amazing pastor out.  To spread Christ’s true message of love and acceptance only to be sent away from your job is terrible.  We wish Craig all the best moving forward and that he may find other ways of continuing the true message.

Biker culture is in full swing, so baby, we get to see all sorts of leather!  Justice and Jaadon might be twins but one deals with a little more stress in the community being openly gay.  Erik is exploring his sexuality and gender identity, later admitting during the show that he enjoys wearing women’s clothes.  And then there’s Amy, a mom of a transgender individual who wanted to create a safe LGBTQ+ space in their conservative town.  Though a small prayer protest happens across the street, nothing gets confrontational.  Fun fact, Watertown Love, Amy’s group, is one of the biggest contributors to Pastor Craig’s GoFundMe above.

Sea theme is fitting rolling into Hawaii for some sun and fun.  We learn the term mahu, the Hawaiian expression of identity for those who feel other.  Homosexual, bisexual, transgender, and others identify with the mahu identity.  We meet Kekoa, a gay man who used to do drag but always drinking.  He’s ready to reclaim his drag life sober.  Jaquelynn is a bisexual dance teacher ready to break out of her shell and be herself.  Lanakila is a proud mahu ready to show the community who they are. 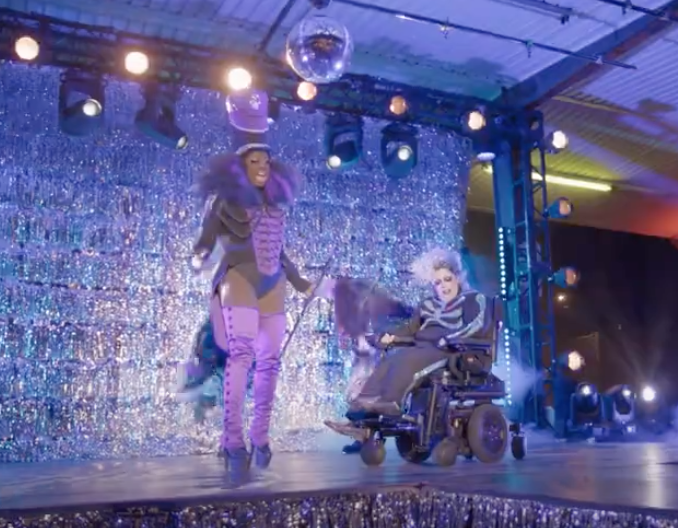 In the last episode of the season, we go to Colorado in a town still very closeted.  Three transgender individuals take the stage this episode, showing the small town there’s room for everyone here.  The fake fall at the beginning was a cute cover for however Eureka broke her arm.  Taylor, female to male transition, is ready to honor their androgyny.  Angie, male to female transition, wants to own her female personality but show she can still hang with the boys on the dirt bike track.  And Dustin, female to male transition as well as disabled, already has a history with drag but is ready to full embrace themselves and empower others.  Even cooler, Dustin performs to “Welcome to the Black Parade” by My Chemical Romance and receives a sweet, supportive message from singer Gerard Way.

Hoping another season will be in the works, and many more honestly.  A show where the point is love and acceptance is deeply needed right now.  Creating safe spaces for LGBTQ+ individuals is important and if they serve up saucy looks too, well that’s just a bonus!  Hoping we’ll see all these stunning queens again because they’re here and not going anywhere!