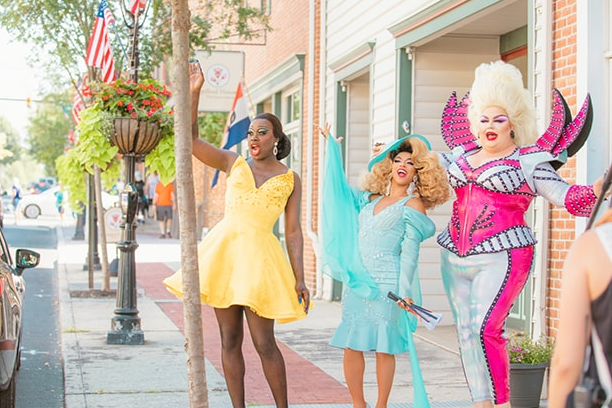 As previously noted, the big, bold, colorful show that is WE’RE HERE got an abrupt halt in production, like so many shows both unscripted & scripted did, during the pandemic. The drag queen trio that is Bob, the Drag Queen, Shangela Laquifa Wadley and Eureka O’Hara did not get to leave their mark in Spartanburg, South Carolina as they were set to do in early 2020. Here it is in the summer of 2021 and we have found out that production has now resumed on Season Two. However, they are not back in the Palmetto State.

HBO has not dropped any official word that the show is in front of the cameras; it rarely does on any show until there is a Teaser fit for distribution. We found out via a posting from a newspaper that the drag queen show was in town. It appears the production is in Evansville, Indiana. Our source is the local Courier & Press; though they got the title of the show incorrect they do have the right HBO show as the production show and the big personalities were there enjoying July 4th activities before getting down to business.

For further proof here is this clip –

Nina Rosenstein, executive vice president, HBO Programming states – “We’re Here resonates in ways we had hoped for but couldn’t really have anticipated. The stories of our small-town drag daughters created an incredibly positive communal experience. We can’t wait for Bob, Shangela and Eureka to continue their journey helping others find their voice.”

Whether or not Evansville is the first stop in the season or whether the drag divas make it back to Spartanburg we don’t know, but if you follow this show then look for them possibly parading, primping, posing and having a bash somewhere near you and look for WE’RE HERE on HBO.