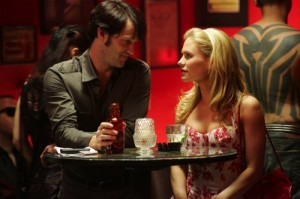 Stephen Moyer, who plays vampire Bill Compton on HBO’s True Blood, is recently married to Anna Paquin, who stars as the sexy telepathic waitress Sookie Stackhouse. In an interview with the Sunday Mirror’s Celebs Magazine he said this:

“Everybody on set now gets to see what goes on behind closed doors. We leave nothing to the imagination. Our love scenes actually work really well.
Since the crew knows we do have chemistry and are together in real life, I feel like it takes away from the nerve-wracking tension that can occur when people have to watch two actors who are just getting to know each other engage in an intimate scene.”

They certainly haven’t left much to the imagination in previous seasons of True Blood as far as this reporter can tell.  It looks like that won’t be changing any time soon.  Season 4 premieres this June.