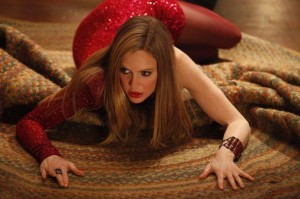 This summer’s new season of True Blood is one of the most highly anticipate shows on HBO.  Writers and cast members have promised a whole host of surprises this year and we, of course expect to delve deeper into a few of the characters origin stories.

For this season there has been speculation that Pam, Eric Northmen’s friend and confidant, will have her origin story explored.    Alan Ball, lead writer on the True Blood team is looking for new cast members in particular.  A non-threatening man in his 30s and a prostitute oddly named “Washcloth Helen.” Both of these characters will be introduced to fans during a flashback to a San Francisco brothel in 1905.  The date is significant because 1905 is supposedly the date where Pam becomes a Vampire according to author Charlaine Harris.

The HBO team has changed the story before so the fact that Pam actually turns in London in the novels doesn’t mean much.  Will we see more of Pam played by the lovely and talented Kristin Bauer in Season 5?  Only the True Blood gods know for sure.