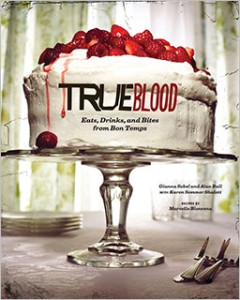 As a major True Blood fanatic, I was excited when I heard the news that a True Blood inspired cookbook would be released. I’m not really a fan of cooking but I thought it would be fun to make some of the recipes as seen on True Blood.

That is exactly what I got. There are legitimate recipes from items shown in True Blood. For example, what did Sookie order the first time she went to Fangtasia? A Gin and Tonic.  On page 40, there is a recipe for that drink along with a preface from Sookie recalling her experience that night at Fangtasia. Although another recipe is not credited as Gran’s Pecan Pie, there is a recipe for one as one might expect due to the prominence the pie played in Sookie mourning the loss of her grandmother.

Unfortunately, there is no recipe for Cajun Margaritas. There isn’t a whole lot of “vampy” looking food, either, if that is what you are looking for. There are a few of these bloody looking recipes including one from Russell Edgington called “Beautifully Broken Bisque”. This recipe includes beets and turns a deep garnet when served. Another vamp friendly looking food that was also referenced to in the series is Talbot’s “Just Desserts Blood (Orange) Gelato”. It is stunning in its slightly red color and one could imagine what is giving off that tint is blood. (Don’t misunderstand, I don’t want to eat or bake a Human Heart Pot Pie, nor do I want a recipe for it, but I was surprised there wasn’t an alternate offered such as a hunter’s pie made to look sinister.) 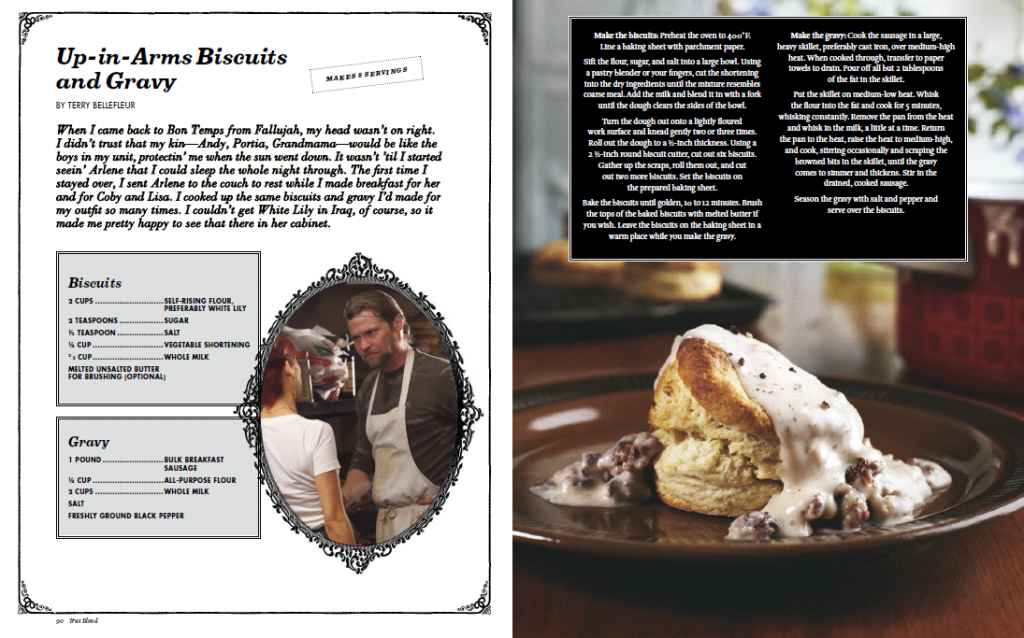 This cookbook is a bit tongue in cheek. Most of the recipes are standard southern fare. Being from the Southern Plains, most of these recipes have been around for me in some format or another for my entire life. For example, “Betrothal Biscuits” is a basic recipe for making biscuits from scratch. It is very similar if not the exact recipe my great-grandmother used. This recipe is contributed by Summer Huckaby, Hoyt’s temporary distraction from Jessica. These are the same biscuits she used to try to interest him in marriage. 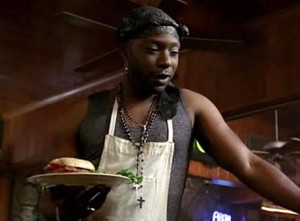 I tried a few recipes including the biscuits and “Ruby Jean’s Hash” by Lafayette Reynolds. As I said, the biscuits are the same as great-grandma’s but that is a HUGE compliment. They are soft and golden out of the oven and are perfectly flaky. The hash was excellent, easy to make and something I would expect to eat in Louisiana since it’s made with andouille sausage rather than corned or roast beef.

As one might expect, over 20 pages are reserved for drinks. Again, most of these are standard bar recipes with tweaked names such as “Tequila Moonrise” by Debbie Pelt or “Mama’s Whiskey Sour” by Tara Thornton. Then you have Nan Flanagan’s recipe for Tru Blood, also known here as “Ruby Mixer” as it is used as a base for other drinks that are served at Fangtasia; One of which is Longshadow’s “Dead on the Beach”.

Little in this book is kid friendly (why would it be?), so don’t look for a family meal that everyone will love. My kids are picky and don’t care for much that doesn’t include chicken nuggets or mac and cheese. I can’t give an honest family recommendation for every family though. Your family may actually love hot wings (here named “Get You Some Wings and Fly Away” offered by Lafayette) but mine doesn’t. 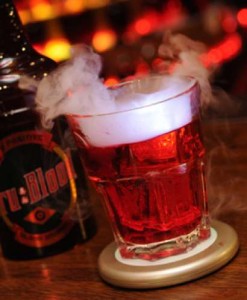 The only recipe I can say my kids liked that we have tried is “Chillin’ Out Ice Cream Sundaes” by Sookie Stackhouse which encourages two people to eat out of a pint of ice cream on the sofa.

This book is a fun book if you just want to read it, too. Almost every recipe is contributed by a character. Most of the recipes also come with a little preface from the character that “created” the recipe. There is an intro to different sections of the book as well by some of the leading characters like Eric & Alcide. It is full of stills from the show and the set, which are simply amazing. The set shots are character free so you really get to study the décor behind the bar at Fangtasia and Merlotte’s. That is another part of this book that would be fun for any True Blood fan. Every character from the television series has at least one contribution. They do not all get a prologue but even Myra Norris has a contribution.

Some of the recipes are very time consuming and take a few special utensils or ingredients that one may not just have sitting around in the kitchen, like the above mentioned gelato. Then some others are simple enough for anyone to make, like Amy’s B.L.T. It isn’t a cookbook for a specific level of knowledge regarding cooking. There are recipes for every level of experience.

All in all, I am happy with the book as an average cook and an advanced Trubie. It is a fun collector’s item but not what I would call a practical, family oriented cookbook. Of course, I didn’t buy it for the recipes. You can buy it for whatever purpose on [amazon_link id=”1452110867″ target=”_blank” container=”” container_class=”” ]Amazon for under 20 bucks[/amazon_link].  A perfect gift for any True Blood fan.