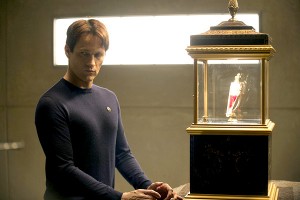 This episode was both wildly touching and wildly frustrating.

I’ll start with the frustrating part. Now that Bill’s gone completely off the deep end, he’s turned into this power hungry, Bible toting Lilith drone, constantly trying to convert whoever he can get his hands on. In his crosshairs currently is of course, Eric, one who is adamantly against all this Lilith bullshit. Bill isn’t too keen on his defiance, so he forces him to ingest some of Lilith’s blood so that he and Nora can have a moment or whatever. Much to Nora’s surprise, Godric shows up first. Eric is pleading with his maker, Nora is furious that Lilith didn’t show up. Well, naturally, 5 seconds later Lilith shows up to slit ghost Godric’s throat, only to leave Nora and Eric weeping in submission to a bloodsoaked Lilith. This whole thing was completely ludicrous. I don’t for one second believe that upon seeing this playout, Eric actually pulled a 180 and is now onboard the Lilith train. I think he’s merely going to fake it till he makes it so he can try to get the hell out of there. (I will say that watching Bill watch them through the monitor, screaming at thing air, was quite fun.) When Bill uttered “Praise be to Lilith” I just about slapped him through my TV screen. It’s not that I can’t appreciate the evolution of a character from good guy to monster; other shows have managed that same arc beautifully (Breaking Bad, Buffy, The Closer). It’s just that I don’t think Bill’s transformation into this acquiescent follower is that believable. And therefore, I feel more disconnected from this story with each passing week.

Complicating matters is Bill’s decision to bring Jessica into the compound, spewing biblical nonsense all the while. I do so hope Jessica keeps a good head on her shoulders, and I’m hoping that her past experience with over zealous evangelicals will keep her from drinking the kool-aid.

I want to take this moment to mourn the loss of a character I wish could have been on the show a lot longer than what she was given: RIP Molly. Your snark will be missed.

In the most unsurprising development yet, Russell finally decided he was done with putting up with the Authority’s bullshit. As if we thought for one second they would be able to contain him. Salome is dumber than I thought she was for assuming Russell wouldn’t want to dilly-dally underground 24/7 when he could be out wreaking all kinds of havoc (with his new BF Steve, natch). He calls the whole thing out for being the shitshow that it is, and blows that joint faster than an automatic stake to the heart. Russell will and probably forever be the best Big Bad True Blood will have, and seeing him back at his nastiest is always a treat. I’m fine with seeing him at the helm of some fantastic theatrical destruction; when you’ve got Denis O’Hare nailing every damn line, it’s hard not to be engrossed by his madness.

Oh, and Sam and  Luna ride inside Steve’s bag back to the compound in search of Emma. This is surely only going to cause a real clusterfuck here in a hot minute. But I do kind of love that so many main characters’ storylines are actually intersecting, and in not totally asinine ways. 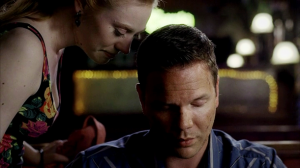 As much as I harp on True Blood for being pretty predictable and sometimes painfully obvious, it really does have its moments, too. In this week in particular, I was honestly moved by the final farewell given to Hoyt. Seeing him glamoured into oblivion so as to forget Jessica and Jason ever existed was absolutely heartbreaking. Everyone in that scene totally nailed it too; I mean just fucking killed it. That was only the tip of the iceberg for Ryan Kwanten’s truly fantastic performance. After stopping Hoyt one last time on his way out of town, he was devastated to realize that their friendship–one that had lasted their whole lives–was definitely over. Watching Jason lose it in the car with Sookie was terribly crushing. Kwanten rarely, if ever, gets material that allows him to really show off his range like he did in this episode. He really had me going when he broke down. UGH. That was just too sad. (That’s not to say that Jason wasn’t on a roll this episode either; he had several really funny moments when he was “investigating” with Sookie–lifting up the teddy bear’s skirt, “it was the only one marked vampire attacks, question mark.”)

And on another note, though I’m sad to see Jim Parrack leave, I am glad that True Blood actually let him go. He had pretty much run out of things to do and was no longer relevant. They killed off other folks prematurely (IMO) without the blink of an eye–Jesus, I’m looking at you–so I was kind of surprised to see him linger so long as a pointless fringe character. I’m glad to see he’ll no longer be walking around in eyeliner just taking up space.

Speaking of Jason and Sookie, I really do love it when the two of them spend time together. Paquin and Kwanten have great sibling chemistry, and when they’re both fighting for the same cause, it can lead to some really great scenes. After Jason pointed out Sookie’s stupidity about the whole ‘under the bed’ thing, they find an ancient fae contract that states that Sookie now belongs to Warlow (the vampire that killed their parents). So now she’s got Russell AND Warlow on her heels. Shit’s about to hit the fan real quick. 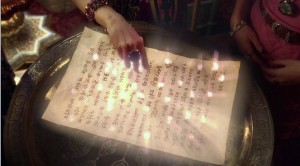 I am interested to see where Warlow’s been this whole time, seeing as how he’s apparently been MIA since killing Sookie’s parents. What’s he been doing? Why is he back all of a sudden? WHO IS HE?

The best thing to happen this week though? That would definitely Tara just straight up killing that new sheriff. THAT WAS AMAZING. I knew she was up to something immediately, but I figured Pam was in on it to. I should have known better. Yes, this will cause all kinds trouble with the Authority, but it was still awesome nonetheless. If only so I don’t have to look at that Marilyn Manson groupie anymore. (Also, Pam and Tara = SO MANY STUDS.)

With only 2 episodes left, I’m hoping they’re beyond jam-packed. Oh, and this week’s Snarky Bite of the Week goes to Tara with “I don’t know nothing about birthing no baby vampires!”