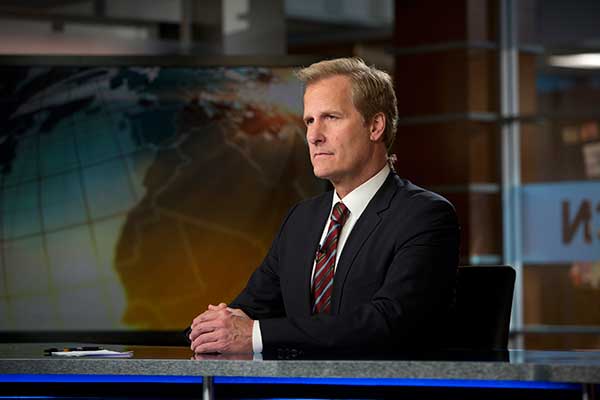 Season 1 of “The Newsroom” was a soaring testament to Aaron Sorkin’s style and wit. It pressed a reputed liberal message through a self-proclaimed conservative news anchor. It did this so well, and did it right up until the, now infamous, “American Taliban” comment in reference to the Tea Party.

Season 2 picked up just about where you might expect it would had a real news anchor gone so far out on a limb on air, and while the first episode may have gotten the show off to a slow start, the season’s second episode, “The Genoa Tip”, feels a bit more like what we have come to expect.

Jim continues to have trouble getting on the Romney campaign bus until a rival reporter, Hallie Shea (Grace Gummer), pops her head out and Jim gets to catch a break. Of course, Jim proceeds to be a bit too trusting, which is highlighted when he asks Hallie to frame him for a shot and she doesn’t bother pointing the camera at him. She then subtly continues to remind him that they are competitors by stating, repeatedly, that they are competitors. We got the point.

Hallie seems to be eyeing Jim up and down in several of the scenes as well. I am not sure if she is “sizing him up” or not, but given the other storylines flying around, I would not be surprised if they are angling for a new romantic interest.

Speaking of romantic interests, Maggie’s life is slowly turning into pudding. Seems Maggie couldn’t get much sleep after Don walked out on her, and so took to sleeping in Sloan’s office. She is planning to move back in with Lisa. Lisa has not seen the YouTube video of Maggie ranting about her feelings for Jim.

Dons not taking Maggie’s calls, and they foreshadow a little with the “4 rings, 2 rings” speech. Sloan helps Maggie out, invites her to the gym where Maggie can at least get a shower, and goes with Maggie on a desperate adventure to get the YouTube video taken down before Lisa has a chance to see it.

Unfortunately for Maggie, things just don’t go smoothly, and despite a trip out to Queens to confront the YouTuber, Erica, between loads in a public Laundromat, things just don’t turn out well. After an awkward exchange, Sloan helps Maggie out again but bribing Erica with a tweet to her 450,000+ twitter followers. Seems legit! How could this possibly go wrong?

Well, for starters, your extremely trustworthy Erica took some offence to Sloan’s attitude and decided to put the video back up…and this time Lisa sees it.

The scene between Maggie and Lisa is one that you have to watch to really appreciate, but Lisa unleashed the full power of Sorkin’s passive witty rage in a Toby Ziegler-esque rant (without the yelling) and puts an abrupt and brutal end to the friendship with Maggie. She then proceeds to passive aggressively email Jim the video rather than calling him and getting his side of the story.

Maggie’s life does take a turn for the “better” though. She decides to bug Mackenzie one last time about Africa by explaining how she just wants to be the “go to gal” for something around the newsroom. She is finally able to convince Mackenzie to get on board with the story and ship her off to Kampala, Uganda…where it is safe. Maggie heads off to give Gary the “good news”, and he tells her that a wire report has just come across, 5 people were killed and another 150 wounded in, you guessed it, Kampala. Maggie tells him to hide the report from Mackenzie.

Maggie calls Jim to let him know she’s leaving, but she only gets “2 rings” and she knows Jim is blowing her off (see, foreshadowing).

While all this is going on, it turns out Will is having another slight case of the self-doubts. He is upset that Charlie pulled him from the 9/11 memorial coverage, and we find out that 9/11 was the first day Will worked as an anchor. Turns out he was a lawyer before getting into news, and was working as a legal correspondent when the 9/11 tragedy struck America and the regular anchor was stuck grounded at the airport and the back-up couldn’t make it in.

Charlie and Will get into a bit of a tiff over the targeted killing of Al-Awlaki in a US drone strike in Yemen. Al-Awlaki being an American citizen, Charlie is outraged by the unprecedented attack that circumvents the entire legal protection of the US Constitution and justice system. Will rebuts by reminding us that he is a Republican and goes on to point out that you can’t switch teams and try to kill as many Americans as possible without expecting to be treated like an enemy of the state.

Neil is still following up on the Occupy Wall Street story, despite Mackenzie publicly shaming him. He gets arrested while meeting with Shelly when the protest gets out of hand. He records the ensuing arrest which leads to Will heading down to the police station to bail him out.

Sorkin is fond of writing rants, and this one is fairly entertaining, although I think it is a bit out of place and is really only suited to continue Wills “evolution”.

Underlying the entire episode is Don’s persistence in helping, Troy Davis, a convicted murderer of a Georgia police officer. Between several well written and wonderfully executed scenes between Don and Will, and the special bulletin to report the death by lethal injection of Davis, Don struggles to convince people that they need to take a stand and that they need to act on a report of illegal lobbyist influence on the Georgia parole board.

The highlight line of the story is when Don frustratedly asks, “What could the lobbyist have said to the parole board member that could have possibly been better what the Pope said?” 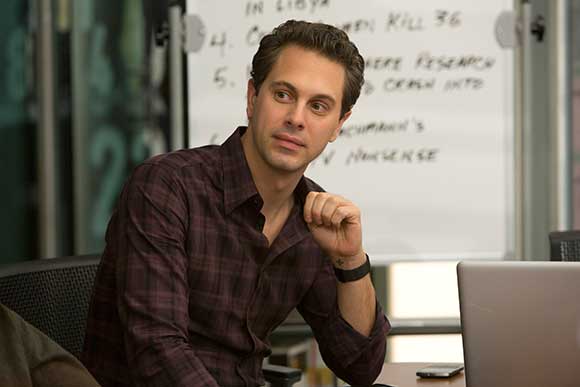 It is a touching moral quandary that I can only imagine affects true journalists; to have the power to change people’s minds and influence the outcome, but the moral and ethical obligation to inform and protect the public trust and allow the people to make their own decisions.  It may be one of the most compelling components to The Newsroom. The sharp contrast between what news often is, and what it is supposed to be.

After all of the other shenanigans, we finally get somewhere with the Genoa tip. It seems this is the topic of choice for the season, and that this storyline is going to linger for most, or all, of this season.

Jerry, having gotten the go ahead from Mackenzie to pursue the story, gets a solid lead in the form of Gunnery Sergeant Eric Sweeney, a retired member of a Marine Special Ops unit who confirms the use of Sarin gas on civilians during an extraction mission codenamed “Operation Genoa”. Mackenzie is shocked when Sweeney declares he was present during the operation.

All in all, the episode was good, although I think it lacked the mustard of most of the first season. It looks like Sorkin is trying a slightly different approach to the storytelling of season 2, and it just hasn’t settled in yet. Season 2 is less like the Newsroom and more like the later seasons of The West Wing, and while I loved that show, this show is a completely different animal.

I am looking forward to seeing the questions presented in episode 1 answered as we move through the season, and I am confident that even if Sorkin is taking a new approach to the series, it is going to be a fun ride.