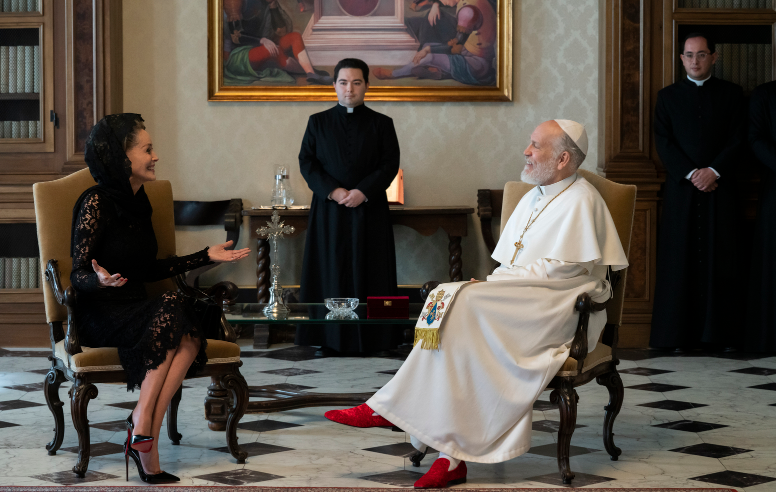 In episode five, Sharon Stone meets with the Pope. She reasons with him that gay marriage is something to be recognized amongst the Catholic church. She also states that artists (musicians, actors, singers, painters, etc.) be supported by the Vatican. Having that kind of seal of approval would make the arts be taken as a credible profession. Pope John Paul III isn’t without reason on what Sharon says. In a private conversation between the Pope and his PR lady Sofia, we hear the discussions and the rationale behind what the Pope suggests. Now, there was something about Sofia’s husband that I couldn’t quite put my finger on, but I did not like him one bit. I feel as though he is up to something, but I can’t say what it is.

As for our Sister Caterina, she has a clandestine meeting with Faisal. Remember how I said this wouldn’t be the last time they met? You just know she’s going to get pregnant. It’s not that Nuns are totally ignorant about sex, but they are forbidden to have contraception because they have taken a vow of chastity. The 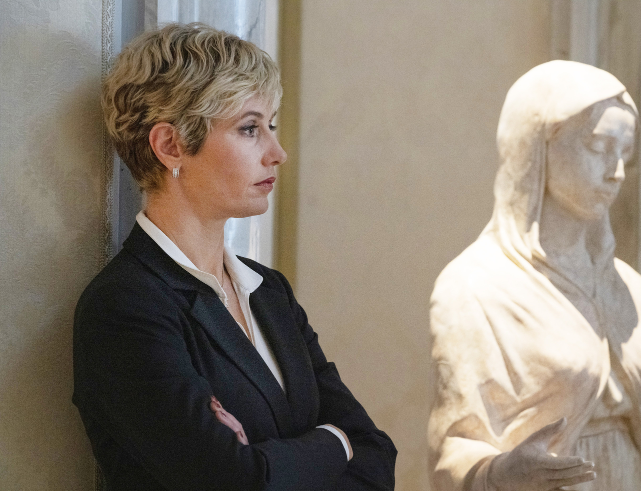 pregnancy is going to cause scandal and ruin for both, but more so for Caterina. After reports of a terrorist attack take place in Lourdes, France, the Pope goes there and is embraced by the people. While John Paul III is becoming popular with the people of France, Pius XIII is making an unlikely comeback of sorts. His breathing has increased to a healthy pace – whether Pius XIII fully comes out of his coma is another thing entirely. Voiello is proving to be a real bastard by having private conversations about Spalletta and Altbruck and their collaboration. Altbruck strikes me as a power-hungry jackass who would do anything to move higher in the ranks of the Vatican. I mean, he’s married to the PR woman who works for the Vatican, so what’s to say that Altbruck isn’t using his wife in some yet unknown way to gain power for himself? What’s Voiello going to gain from spying?

Esther continues to get paid for having relations with men who are otherwise disabled and give some of her earnings to Fabiano. She severs ties with Fabiano. This desperate behaviour continues into the next episode when we see Esther making a business deal with Attansio’s mother. You could look at her actions in one of two ways: she’s desperate and needs the money or she’s using what resources she has in order to survive and do what needs to be done. Nobody else is helping her. A prevalent theme in this episode is sexual relations – and not all of it is legal. Sofia finds out some upsetting news about her scumbag husband – he procured the services of a young call girl – an underage one! – which makes me vomit. To make matters worse, Altbruck wasn’t the only one with her (insert cringing motion) – Spalletta and Guicciardini were also involved in this sordid arrangement. Absolutely made my skin crawl as someone watching the show so can you imagine what Sofia was feeling?

The thing with knowledge is that when you have a little bit of it, it is a dangerous thing indeed. If that knowledge is shared with the wrong person, then it’s used 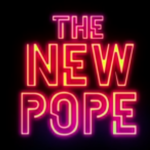 for blackmail or extortion. Sofia goes to Voiello and shares her discovery about her husband. Spalletta attempts damage control when he speaks to the Pope and to smooth out the jagged edges, states that they need Guicciardini so that they can delay laws regarding the Church taxes (which would be retroactive). Spalletta – surprisingly – strikes while the iron is hot and posits that Voiello should be replaced effective immediately due to all his scheming and lying. It’s become every man for himself. And you thought monarchy was bad – the Vatican, in my humble opinion, is worse. A man like Voiello is not going to take that suggestion very well and there will be retribution. Voiello carries out a few motions before being forced to resign. Cardinal Assente is promoted to Voiello’s position.

Esther finds herself in quite the predicament – who flees the scene and heads for Rome to beg for forgiveness. Pope John Paul III does a television interview which goes awry. Health issues cut the interview short, which could lead to bigger problems for the Pontiff. Time will tell.