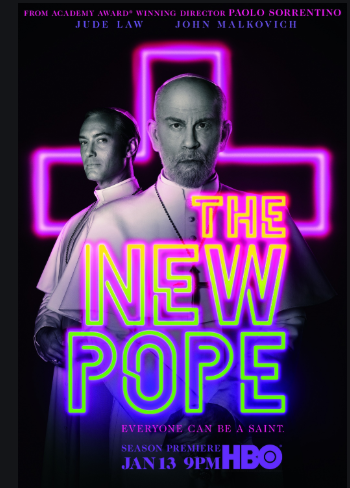 All attention is on John Brannox as the new papal candidate!

In Part II of  The New Pope, we learn Brannox knows a thing or two about loneliness and suffering. He experienced it his entire life and his parents never let him forget who they loved best (his brother Adam) and who they hated. One thing Sir John and Pius XIII have in common is abandonment (Lenny as a child and John as a teen and adult by their respective parents). An understanding of suffering and piety is a strong quality a good Pope should have, and Sir John does. He seems to be the ideal candidate and yet when a terrorist attack takes place, it’s apparent that this new candidate cares – just not necessarily for all the masses. His cool demeanor is noted by Cardinal Gutierrez. Does this mean that Sir John is selfish and only cares when it’s convenient? How many of us have that same notion – we only care when it hits close to home? Has Brannox just hurt his chances because of this incident?

Another group takes up much of this episode – the Nuns. One nun finds herself in a forbidden romance and we just know what’s going to happen down the road. Sure, one nun was about to have relations with a refugee when he gets scared and takes off at the last minute. Something tells me that’s not the last encounter between Caterina and Faisal. Another Nun requests financial aid to visit her dying mother, only to be denied on a bogus reason – Voiello’s butler, Cavallo flat out lies and says the denial came from Voiello himself, which we know didn’t. In response to the denial, the Nun gets a tattoo (something they aren’t allowed to do) – the tattoo being a Nun with a raised fist. The spark of rebellion is ignited.

Then there’s Esther – who’s broke, desperate and takes up an offer to have sexual relations with a deformed man (the son of a wealthy woman) in exchange for a lot of money. The son has a medical condition (hair all over) and Esther can’t go through with it. Being coerced into doing something, no matter if the reason is a good one or a shady one, always has consequences.

Sir John is installed as Pope John Paul III. He meets with Marilyn Manson, who is quite articulate. This was my favorite scene (next to the one with Sharon Stone in the next episode). Manson is very droll, especially when talking about being in the recording studio and using drugs to help the creative process. It was funny to see how celebrities speak with the big guy. No doubt, some celebrities have positive interactions with the Pope and others maybe not so much. I liked Marilyn and the Pope because it was like watching the devil and God having a conversation and you could liken it to an awkward first date scenario. When Marilyn tells 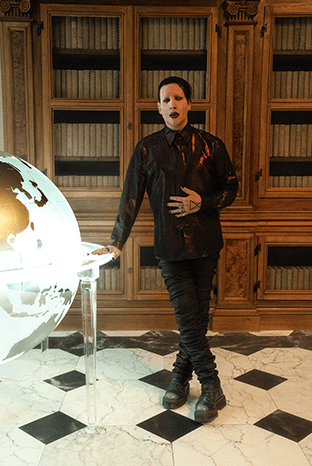 the Pope to visit the other one in the hospital, it was very straightforward. I wouldn’t expect anything less from Marilyn Manson. The two are so different. Then, there’s the brewing situation with the Nuns – who have now officially gone out on strike – to be honest, good. Nuns have always been viewed as less important and historically treated as a second class next to their male counterparts. Good to see them with some gumption. Voiello tries to subtly threaten the Nuns and in turn, they request an audience with Pope John Paul III.

The new Pope goes to visit Pius in the hospital – as he’s leaving, the leader of a group of devout Catholics whispers something into his ear – we don’t get to hear the words. Did these words have a profound effect on Pope John Paul III? What was so compelling that she had to whisper in the Pontiff’s ear? We also see the Pope making several appointments. I rather found it amusing because it’s like a game of chess – each piece has its’ uses and the Pope is very careful in selecting certain personnel for these appointments. It’s like being a monarch, everyone wants to be favored by the head of the church or country, they all vie for power and want the riches that comes with it but there’s always the danger that someone will usurp or betray from the shadows. I think we all know which person is going to create the most grief for the Pope, and that would be Voiello. Gutiérrez goes so far as to warn the Pontiff about him. We’ll see if Pope John Paul III heeds this advice.