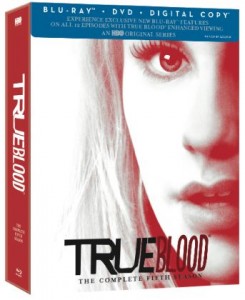 With just a few short weeks until season six premieres dedicated True Blood fans (more affectionately called Truebies) are practically overwhelmed with excitement. While supernatural lore, especially vampires, have always been popular, the genre has sky rocketed to one of the most addicting means for entertainment in the past few years. It’s easy to say that True Blood was at the forefront of this supernatural revolution- especially when you consider the unbelievably large fan-base that anxiously waits for ten months out of the year for each new season.

Some shows have a tendency to fall off when they reach the later stages of their on-air life. Plots begin to lack the normal zest and excitement that once captivated us and it becomes a reluctant habit to flip to that channel each week. I couldn’t help but fear that True Blood was going to suffer this fate. Despite the few plots that left me cringing during the first three seasons, I still found myself faithfully tuning in each week and anticipating season five.

I was not disappointed. Within the first few scenes of the first episode, I knew that this would the redeeming season for True Blood. Stepping away from the typical love triangle that seemed to plague us all through the first four seasons, the writers began to explore new character dynamics and get back to the heart of what the show is really about-the supernatural and the life they live in a world that isn’t too happy with their existence. They began to develop secondary character plot lines that gave more depth the story than just focusing on Sookie and her tangled romances ever could. The plot was always captivating, the actors flawless, and each week I was left waiting for more.

There might have been more than a little squealing (and a bit of awkward dancing) when I received the box set in the mail.  I have always been a huge fan of bonus features because they allow the viewers a chance to see inside that actors mind’s, to explore the world that we lose ourselves in for sixty minutes a week, and to make us feel a little more as though we are a part of the process. The Blu-Ray DVD Box Set for True Blood Season Five did all of that and more.

Here are the details:

Bonus Material
Full of captivating back stories and extensive audio commentaries, the fifth season’s bonus materials offer appetizing tidbits for diehard fans.
Blu-ray Features (along with all DVD extras):
True Blood Episode Six: Autopsy – Join the cast and crew as they dissect the major events of episode six and provide an in-depth, behind-the-scenes look at how True Blood is made.
Authority Confessionals – Learn more about the mysterious institution known as The Authority, from Nora, Kibwe, Rosalyn, Salome, Steve and Russell.
Enhanced Viewing:
Character Bios, Vampire Histories and Hints/FYIs: Get even more background on favorite characters, trivia facts as well as show hints and clues.
Flashback/Flash Forward: Move through time in the world of Bon Temps. Flashback to relive pivotal moments or Flash Forward to reveal the significance of a certain scene.
True Blood Lines – Uncover secrets from relationships past and present in this engaging, fully interactive “re-Vamped” guide and archive.
DVD Features:
Inside the Episodes – Get the back stories on each episode with revealing interviews from the show writers.
Audio Commentaries – five commentaries with cast and crew including creator/executive producer Alan Ball, Anna Paquin, Stephen Moyer, Denis O’Hare, Carrie Preston and many more!
Previews & Recap

For four seasons, we wondered exactly about the power this mysterious Authority had. They were spoken of in hushed, frightened tones but there was never any true detail given about the people involved. Season five finally gives us those glimpses we’ve been craving and this bonus feature goes into even more detail. With brilliant character biographies, FYIs, and astounding flashbacks and flash-forwards; it finally begins to feel like the Authority is no longer a mystery.

Out every episode that left me on the edge of the couch practically hyperventilating during season five, this is definitely at the top of the list. For those of you who don’t remember, Episode Six was full of action. Russell is brought back to the Authority and makes his mark during the celebration dinner, Sam and Luna make some trigger-happy friends, and we catch our first glimpse into the real story behind Sookie’s parent’s death. Needless to say, this is easily my favorite episode of the season and the writers must have felt the same way to dedicate an entire bonus feature to it. The cast and crew dive into their own thoughts on the episode and give some awesome behind the scenes looks into the making of what can easily be named the most dramatic episode of the season.

This seasons “re-Vamped” interactive relationship guide updates us all on the relationships of Bon Temps; because we all know it’s ridiculously difficult to keep straight who slept with who and who’s currently in love with who. (Seriously though. Is there any couple left on this show that hasn’t gotten it on yet?)

If you’re one of the (slightly) obsessive Truebies, there’s nothing better than a detailed backstory about each and every episode along with interviews from the writers. I know I went into it with a few agonizing “But why, writers, why?!” moments!

We only get five commentaries, which is really my only complaint about the entire DVD set. As much as I love the actors and crew they chose (Alan Ball, Anna Paquin, Stephen Moyer, Denis O’Hare, and Carrie Preston), I would have loved to hear from some of the other actors. Specifically, Alexander Skarsgard, Kristen Bauer van Straten, and Rutina Wesley!

Regardless to say, I finished devouring the entire box set in record time and couldn’t be happier. It also did quite a bit to ease the anxious waiting I’ve been going through in preparation for season six (though, the excitement is even more overwhelming at this point).

Have any thoughts? Leave them below! Let me know what you think about the box-set, or even the season in general!  Order your copy on Amazon if you’re a True fan.