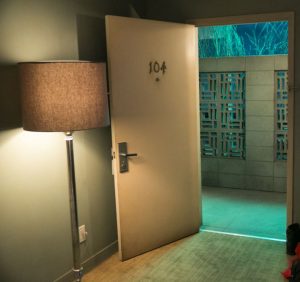 We now peek inside the rented room to see who inhabits it is episodes 5 & 6 of ROOM 104.

This one comes to us as a very straightforward little story. It is a simple dialogue between a son and his mother. He is holed up in Room 104 waiting out the opportunity to pitch his finished book to a publisher in New York. His mother, back home, is called upon to aid him in seeing that the job opportunity takes place when he misplaces a vital part of his whole meeting – he forgets the very novel he is to present.

The story takes us back to 1997 with young Anish arrives at his motel stay. He is played by Karan Soni. You might recognize this actor from India in such movies as Deadpool and the 2016 version of Ghostbusters as well as a character in the “Hooli-Con” episode of SILICON VALLEY. Here he is Anish a young aspiring writer who has completed the first draft of a novel entitled “Gently Through the Current.” He arrives at his room and wants to get to his manuscript to work on the last 10% of the work before an important meeting with a literary agent in New York that Friday. Ah, so the motel is somewhere close to NYC? That is the first indication of where this series is geographically located.

Anish, however, is not going easily or gently through this process because after a mad search through his simple travel gear he discovers that he forgot his laptop which houses the needed manuscript. He left it at his Mom’s place a good distance away from the motel room. It takes a number of frustrated tries to contact his Mom, but the frustration is only beginning. When she is finally home and able to call back an intense dialogue takes place that shapes the rest of the story.

Anish needs his Mom to e-mail the manuscript to him. Simple as that. He can get a hard copy somewhere if she can just get the document to him but that is easier said than done as the phone conversation proves. On the other end is Divya, his mother voiced by Poorna Jagannathan. We know her best as Mrs. Khan in THE NIGHT OF.  Unfortunately, Divya is not computer illiterate. Windows 95 isn’t that old and she has not kept up with the new technology age. Anish has to explain to her where the power button is and makes the mistake of using technical jargon she is just not grasping. Some funny and well-written moments there. He says “Okay, I want you to tell me what windows are open.” She replies “All the windows are closed. It’s very cold outside.” From what I observe today this story doesn’t need to be set in 1997 because there are plenty of people just as naive today about it all, but that’s a minor point. 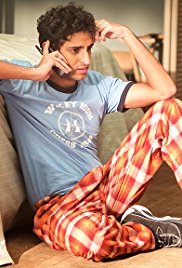 What builds here is Anish frustration that he cannot walk his mother through the technical steps to copy and e-mail the valued document. On the other end of the phone, Divya is equally frustrated as she doesn’t like being sworn at and accused of being too stupid to accomplish the task. We know something bad is going to happen during the yelling back and forth. At first, I thought that his Mom would open up a file revealing private thoughts or images that Anish would hope were never seen. Then it dawned on me the natural conclusion to it all. This is not a Spoiler Alert because we all could easily guess the likelihood of it happening so I’ll just type here that – Divya deletes the manuscript.

Anish is crushed that his Great American Novel is lost and expects his mother to get the laptop to a computer store to get it retrieved by any means necessary or Anish’s life is ruined. That follows with tense moments on the phone as an anguished Mom finally blurts out truths Anish was not ready for. Exactly what those reveals are won’t be spoiled, but it turns Anish on end and, believe it or not, changes his whole perspective on things including his writing. Did Mom just save the day anyway? Such is the cosmic forces that take hold in Room 104.

Seek out the episode to discover the revelation and its results.

This is the most unique and experimental installment to date. The only dialogue is a man’s voice on a voicemail. The rest is told via interpretive dance with a few balletic moves in there. All of it crammed in that one motel space. It leaves the viewer to come up with their interpretation of what it all means. We are the “voyeurs” of the title witnessing a uniquely intimate moment or at least that is how I take it. You?

We start with looking at the room as if we were standing at the vanity and we see a form pass the curtain-drawn window and we quickly learn it is a lady of the housekeeping staff pulling the usual cart they all use. She knocks and announces herself and comes in to clean and the room is a bit of a wreck. There is an ashtray full of lipstick-stained butts, a piece of birthday cake in a plastic container, a half bottle of opened wine that rolled under the one bed and Chinese containers are strewn about. There is a story to be told here but we know not actually what. 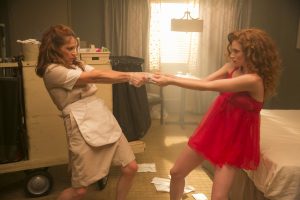 The housekeeper because of the items placed around the room makes her think of her younger self. She finds a lipstick in her shade – Bitter Rose and an odd birthday card. All of this starts her on her reminisce and dance. But there is another in the room hidden in the clump of blankets. From the tagline for the episode, we learn that this is the housekeeper meeting her younger self but you could have deduced that without that information. They dance apart from each other at first then become aware and dance their hearts out. Together they live out the dilemma before them; one is recounting the path she chose in life and the younger is living the dilemma again. Through all the clues given in the half-hour, we learn she is pregnant and shacked up in the motel having an affair with a married man who doesn’t really appreciate her. She is trying to figure what to do.

The thought is then raised here, and once again the voyeur looking in must decide, on whether the older self is just reliving that moment in time or if she is really back in time to somehow alter the decision of the younger self. And remember, they are not communicating except through dance. At episode’s end, they have collapsed on a bed revealing that they sport the same tattoo on the arm (just to make clear that they are the same person) and then older self fades away. So depending on how you interpret the scene does she fade because her reminisces are over or did she fade because her younger self chose a different path meaning that particular older version of herself no longer exists?

The Housekeeper is played by Housekeeper Dendrie Taylor and Girl is played by Sarah Hay. The episode was written, directed and choreographed by Dayna Hanson. It is truly a unique installment. Our ladies emote so much as they roll on the beds and rhythmically bounce off them; they push off sparse wall space and the chairs totally drawing you in as you learn their story. We are indeed voyeurs looking in on the major life choice them shaped them and in all happened in ROOM 104.