We start off this post looking at the horror episode of the season and a good little character study worth a look Ready to open the door to ROOM 104? 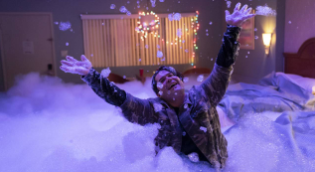 Even if you have never been to one, when you think of a foam party, whether at a cool dude’s house or at a club, you think of beat-pounding music, loud, silly friends, recreational substances of choice and just figuratively, getting lost in the foam. You don’t think of literally getting lost it it. 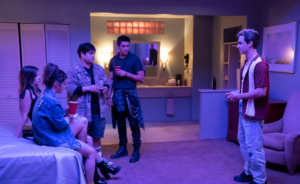 Oops, let’s back up a bit there. We’ve got a group of housemates and the newest of the bunch, Jack (Benjamin Papac), wants to impress them. He leads Morgan (Alison Jaye), Hunter (Tim Granaderos), Jenna (Olivia Crocicchia) and Luke (Harvey Guillen) into Room 104. They see a seedy motel room and wonder why the party couldn’t be back at the house. Jack reveals a mini-bar he furnished and some weed. But what is under the bed is the real party starter; out pops a hose and with the flick of a switch out flows the foam! Now the party is lit.

So, where is the horror, you ask? Come on, it’s in the foam. And one by one the partiers are literally lost in it. What is most interesting about the episode is the subtext to what is happening. Is the foam an evil presence itself or is something demonic within it that we cannot see? The foam builds up to shoulder height so we never see what could be contained therein. It makes you pause to contemplate. But a stronger subtext is yet to come. As an intro to the episode, the birth of the foam party phenomenon is explained as a novel act of non-conformity, but yet in this instance, in Room 104, the opposite is the norm. Conformity happens as the partiers, what, get assimilated? That reveal won’t get spoiled here, but makes a statement if you are into the subtext of it all. 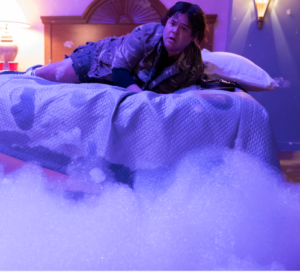 Two other thoughts come to mind watching this one. One still ties to the obvious subtext, Is the foam entity just a force in room 104 or has the entity always been there over the years whenever and wherever a foam party has been conducted? So, if the latter is the case, the non-conforming youth of the past decades have conformed to the subjugation by the foam entity all this time. Hmmm? And it is thoughts like these that have made me come back to ROOM 104 each season.

Oh, the last thought? Man, they must have really trashed the set for this episode and Duplass says as much in his clip. I wonder if it was the last episode shot and then they trashed it all?

Sometimes you just can’t tell where an episode will go and sometimes your imagination takes it a lot further than its intent. “No Dice” was such an episode for me, because of that, and it left me with a warm surprise. As I stated above, this is a character piece, but I was thinking it something more sinister. I’ll point that out as we go along. 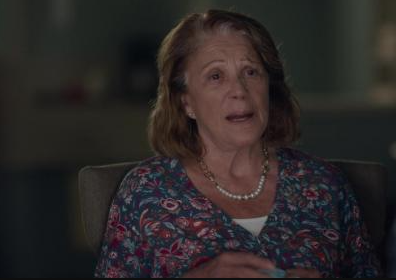 Seated in the room as the episode opens is one elderly lady named Enid (Linda Lavin). She is being tended by her nurse, Julius (Terrence T. Terrell) He has to pry her away from a game show we can hear on the TV so she can get ready for her visitor. Arranged for her is a meet-and-greet with the slick game show host Chip Crawford (Gary Cole). She is the #1 fan of his and his show No Dice. We meet Chip and his producer Steph (Jennifer Kim) before they knock on the room door to see that he is totally disgruntled and disgusted with the whole situation. He wants this over and done as fast as possible. He knocks, Julius opens the door and Chip instantly turns on the slick, go-lucky gameshow host.

Okay, at this point I am thinking that Chip is going to go in and tell this old lady to get over his fascination with him causing a brawl perhaps between Chip and Julius resulting in Chip being on the losing end with a nice shiner, a lawsuit and who knows what. It doesn’t play out that way though. Chip, laying it on thick rushes through his spiel and gifts to Enid and hopes to make a dash for it, but Enid, though mousey, is a tough old broad. She is the one who ends up giving Chip a piece of her mind. She grows disappointed in the host when he doesn’t remember that she appeared on his show. She grows more distraught when she reminds him that she would have won had a rules technicality that was his fault disqualified her from the big win. 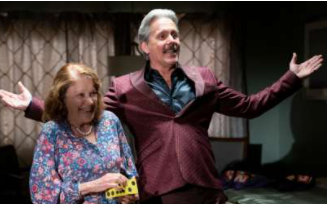 My mind raced with that. With her nurse & his producer both out of the room I thought she was going to snap. She was either going to end up being a witch and cursing him for all time or she was going to turn on him and break his kneecap a la Misery or bludgeon him to death. It doesn’t play out that way either.  What does happen is that Chip, in an agitated state that unruffles Enid, talks out his stress and woes living his life as a false personality on TV and at meet-and-greets, never being himself. While it seemed vapid to him that Enid exposed herself as a true fan of his, he was perfectly alright in exposing his true self. Huh, while I was looking for some adversarial angle to the episode it appears that these twoare showing hints of bonding. And that is when you are hit with the warm surprising ending.

Hey, it was great to see Cole step away with something on HBO after VEEP and, of course, it was awesome, if you’re old enough, to see the 82-year old Lavin (TV’s Alice sitcom from 1976-1985) perform again. A nice episode.

The next time, when we venture inside the room, we find an epic battle & an odd reunion. </s