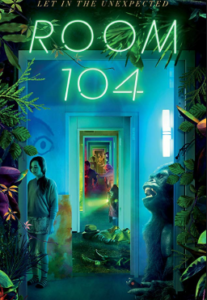 This time around we are looking at episodes # 5 and # 6 of the third season and we’ve got to co-workers sharing the room in the first one and this season’s musical episode follows. ROOM 104 airs Friday nights at 11:00pm and can be watched on the streaming sites along with the first two seasons. Here we go. Dare we open the door to Room 104?

The tale of Greg and Randy, temporary roommates on an out-of-town drywall gig who struggle to find a solution to Randy’s sleepwalking problem.

This one has two co-workers sharing the infamous room. They are both contracted as drywall guys for some major construction job somewhere nearby. They are Greg & Randy and they end up as roommates back at 104 together because no one else in the crew would bunk with Randy and Greg is well…the nice guy who would. The quirky Randy is played by Steve Little (voice actor in Camp Lazlo and Adventure Time; appearances in EASTBOUND AND DOWN, VICE PRINCIPALS). Greg is personified by Sam Richardson (The Office, Detroiters and forty episodes of VEEP as Richard Splett). 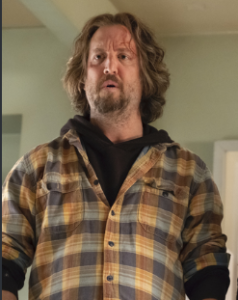 After long hours at the worksite, all these guys want to do is crash for the night. That is an easy task for Greg, at least at first, each night. But, not so for poor Randy. You see, he sleepwalks. He gets out of bed and sometimes just walks right over the bed to get somewhere and it wakes up Greg every time. One night, Greg wakes up to see Randy bumping forehead-first into the bedside wall yet sound asleep. During waking hours, the two discuss the issue, but that old idiom that you can’t disturb a sleepwalker for fear of disastrous results leaves Greg beside himself. But, well…he’s a nice guy and copes in silence. 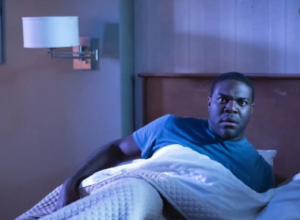 One interesting aspect of this piece is the addition of another player. A narrator talks us through these sleepless episodes and how oblivious Randy seems to be in affecting Greg and details just how it indeed does affect Greg. That voice is mastered by Fred Melamed (voice in Adventure Time, in The Good Wife and an episode of GIRLS). To have an episode narrated in the third season seems a bit odd because I spent brain time wondering if the voice was to be Swofford from “The Plot” premiere; you know, the demon who now curses room 104? It isn’t, but I told you back then that now that the backstory was revealed it could give repercussions on how each episode was perceived and this one is a case in point.

Actually, the narrator is quite needed here because with Randy in the room all of Greg’s angst over the situation is internalized and it wouldn’t have served effective to just hear Greg’s thoughts each night as there is a greater theme at play that only the outside observer, via the narrator can bring out. So, it was quite effective usage but all in all not the best of episodes.

How does it end? Well, you know I never completely reveal that. But I can say the situation gets worse when Randy’s sleepwalking takes him outside the room. In the morning, before work, it is learned that Randy is bloody and bruised and a bit more disheveled than is normal for him. Oh no, what did he do? Will Greg be able to still be, well..the nice guy? Or will he snap? Sorry, watch the episode to find out.

A singer/songwriter on tour confronts her inner turmoil while composing her next song. 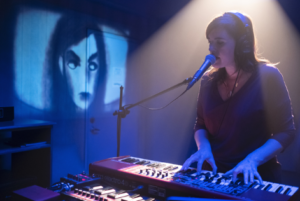 Well, sometimes you get a headscratcher and such is the case here. The 26-minute episode is written by Mark Duplass and Mel Eslyn and directed by Mark D. himself. You either are going to get it or you’re not. After watching this one I had to sit a bit and ruminate on what I saw and I’m still not sure I can figure out each and every moment of it. It is interestingly designed and laid out with real actors and animation juxtaposed into a story that delves into one’s creative process, memories and suppressed feelings.

Julianna Barwick is our artist, named Nina. This is her acting debut I guess but is a composer so she knows her craft. Also factored in is one only known as Woman played by Atsuko Okatsuka, quite strong in the genre of video shorts. So, each one gets a shining moment with a bigger piece under the eye of Mark Duplass.

The piece needs us to too understand a bit about songwriting as it is the musical piece of the season and Nina’s reason for being. Nina is on tour with her latest work, but like any songwriter also tries to find the time to write and she has set up her keyboard in room 104 to see if the next creative wonder can be written. We witness the process. I would think many a songwriter writes from something in their life or something that moves or impacts them, so that element should not be of any surprise here. Nina is applying that here. Now, I was not wowed or bowled over by the music in this episode or the less than wonderful voice of our actor, but that is okay because the importance here is not the finished product but the process it takes to get there that leaves the impression. 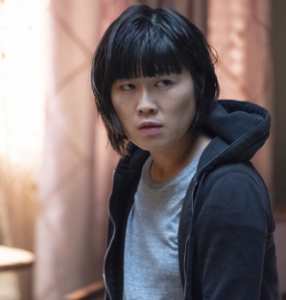 Roughly etched and sketched animated imagery is projected around the room to convey the emotional places Nina is delving into as she makes her way through her writing process. Is this just a unique cinema graphic device of Duplass’ to manifest Nina’s thoughts to the viewer as opposed to just hearing Nina’s mental thoughts? Or are these imageries really playing out because Nina holds some extrasensory means to express her emotional state and memories? Is this her songwriting process? Ah, discover the answer for yourself.

Regardless, I guess, we are faced with interpreting them and that is where things get a little rough. Once she has her instrument and devices set, she starts intoning as she is some New Age/Enya type artist. Cue the images. They start with a little girl outside in the sunlight; we assume it is her as her thoughts project on the wall. A shadow shape replaces the sunlight and turns our girl sad. Nina is not liking where this is ending here and she backs off and stops. We learn through a radio interview that she is replaying that she knows of the shadow. It is up to us now to figure out who or what the shadow is. The animations do make it clear that the shadow is not a person appearing throughout her life but the encapsulation of the negativity that has been in her life. Perhaps, if she faces it her life moving forward would be better, but without it, the emotional draw of her music would be lost?

An epiphany seems to arrive as imagery starts to appear but this time Nina is away from her instrument which seemed to channel all the other animations. It seems to be imagery of her and someone she spent time in bed with but her partner is obscured by the shadow. She takes to music then and the scene plays out showing a terrible argument and screaming until that person, Woman, appears in the room with her. Will unlocking this mystery unlock the greatest music of Nina’s life? Is Woman even really there or is this Nina’s mind still working things out? Wrap your mind around it if you dare and find out.