So, here we go with another season of twelve episodes of ROOM 104. We will review two episodes at a time and do so for the last time as this is the final season. Being the last one you can be sure every last idea the writers had were thrown to the wall to see what would stick, so there is no telling what might be offered up as this is the last chance. There are ample clues if you care to sort it all out. Besides the main trailer there are other video clips illustrating what is behind door 104. You can find them on your HBO streaming site of choice. (There are only two now, HBO and HBO Max, HBOGo is gone). But, I digress; here is the trailer for the season:

There is an added video clip we will be looking at with each episode and that is a Checking In with Mark Duplass clip, but I’ll not look at it until after I view the episode. So, let’s get that motel door open and peek inside ROOM 104.

The last season and Mark Duplass needed to show up on-screen sooner or later. He leads the seas with this one. The trailer shows him in front of a captive audience of five playing an acoustic guitar and singing about murder. Well, if you put those songs and the episode title together then you have it. Duplass is a murderer and with that hairstyle does look enough like Charles Manson. That bit of knowledge cannot be a spoiler alert if you name the title of the piece The Murderer. So, knowing that going into the room we’ve got to wonder just what the twist in the tale must be? 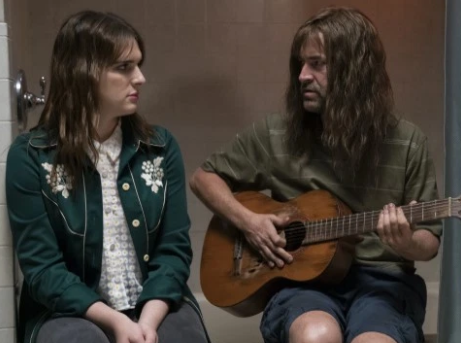 Below is what transpires, up to a point. Twentysomething Logan (Logan Miller) gathers four friends for an intimate performance by the enigmatic, long-lost musician Graham Husker (Duplass), per Graham’s very specific instructions. The rules are simple, five people only, no recording of the evening and one keg of his favorite beer waiting. Uh, oh, we are going to let a murderer get inebriated in the room? He goes for that keg too, lips right on that tap. Everyone is in awe of the personal performance of the epic one-off album, even mouthing all the lyrics. All are enthralled except Katherine (Hari Nef). She is just rolling her eyes. Uh, oh, are we appearing uninterested in front of a murderer? With a need to go hurl in the toilet bowl he rales the disinterested Katherine into the bathroom with him. Uh, oh, a defenseless girl alone in the potty with a murderer? With the dialogue, they share while in there it dawned on me on how the boys have been behaving. They have not put two and two together to figure out what Husker is. He confides to Katherine that the songs are all autobiographical and that he is really a killer. As a viewer I was one up the characters; they don’t know Husker is really a murderer. And while out of the main room Logan takes the opportunity to set his phone to record the music once Husker returns to continue. Uh. Oh, breaking one of the murderer’s rules, how dangerous is that?

Tension builds one last time mid-song when Husker discovers he is being recorded. Are these dudes about to be slaughtered? Will they learn the truth? And, why the confessional concert at all? Is Husker gaining a sympathetic ear? Uh, oh, to find out how the evening ends you’ve got to watch the episode. We’ll wrap this one up with Mark D.’s own words.

Well, let us all feel sorry for this girl right from the opening shot of episode 2. Her name is Sam, played by Jillian Bell. She is holed up in room 104 complete with junk food, bad TV and a large-scale hamster. Yeah, no kidding, look. 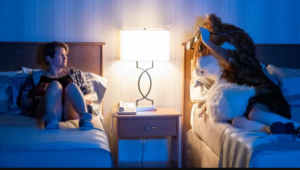 So, what is her story and what is with the human-sized hamster? It is not clear what Sam’s issues are, but it appears that the hamster, personified by Jon Bass, is there to take the viewer and her on a journey to discover just what they are. Whatever it is has to do with ’star time’ which is symbolized by Mario Bros. type star icons. Our first indication of what ‘star time’ might be is when the hamster, and I’m not making this up. gives her head and her pleasure is registered by the cache of star icons she collects. From there we are off on a journey through her life as we learn the ways she has collected her stars. Apparently, her younger self (Josie M. Parker) would be given cold syrup to over-medicate on. Then we begin to 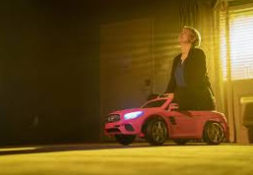 connect the dots and the vignettes played out to learn that Sam is an addict. She is addicted to ‘star time’ or its real-world equivalent…drugs.

So, Hamster is here for intervention or as a representative of Death? He doesn’t really seem to endorse either stance. He is not there to take her away nor is he trying to break the addiction or seek help fpr her. He is merely pointing out her life under the influence of ‘star time.’ Je lets the facts show that the meaning and purpose of her life is solely focused on it. So, now what?

Well, Sam is getting pissed off that her life is under scrutiny and that this odd hamster is the one in control of the matter. So, she fights back with a few well-placed punches and discovers that there are other sources of ‘star time’ other than through drugs. Good sex, and the release of anger can offer up caches of stars as well. But, the real power lives in not needing ‘star time’ at all. Replacing one addiction for another is not the answer Hmm, was that Hamster’s intent? Sam’s burst of anger also revealed the identity of Hamster and the truth that Sam is actually on the bed by the window with a needle in her arm. She has been shooting up this whole time. Can Hamster save her or can she save herself? Has enough of a lesson been learned here or is it too late? ROOM 104 has had its share of tragic characters before so it is npt out of the question that Sam cashes in her ‘star time’ but there is always twists in every story too. Either result will have you cashing in on another unique ROOM 104 episode.

And to think it all started with a sad girl and a hamster.

Included in our next post about ROOM 104 we have Dave Bautista and a divorce party.