We are up to episodes Five and Six of the final season of ROOM 104. Wow, halfway through it alredy. Let’s give is a whirl, shall we? 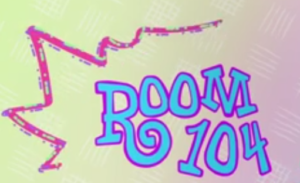 Here is the trick with this episode – it all rides on a gimmick and whether the viewer thinks that gimmick works. There is not a lot to plot structure here or even heady dialogue to work with. It is all treated in such a way to make the gimmick work. All involved from creators to the audience hope it does. What did I think? Read on.

For an experimental series this is the most unconventional piece pf the series. This installment is an episode of a traditional sitcom called Room 104. It breaks the mold of the series because it does not take place in the actual motel room but serves as a creative locale for said sitcom. I mean the door, window, table, beds, closet bathroom & vanity niche are all there but they are part of a sitcom world. The stage oddity about it all is that these are not actors acting and filming the scene but instead they are the characters living a real existence. You knew there had to be a twist in there somewhere, right? 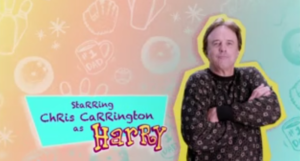 The usual title sequence is set aside for the one that sets up the Room 104 episode. The title sequence explains that a family is spending a long time shacked up in a motel room as more and more complications pile up surrounding the remodeling of their home. And so, life for Harry (Kevin Nealon) his wife Linda (Erinn Hayes), and their three kids, Jules (Sadie Stanley), Will (Jason David) and Maddie (Skylar Gray) wait it out in these close quarters. Of course, what sitcom would be without a handyman; Charlie (Ron Funches).

The episode is a typical one, Th family all remember Mom’s birthday except Dad and so he scrambles to make it a nice day for her while the kids figure out how to bake a cake in the microwave while Mom reads a magazine in the bathtub. Disaster strikes when the closet is opened and a bowling ball his Harry right on the noggin. When he comes back around, he feels out of sorts. He discovers that these people are not his family but only a pretend one and that they are following a script. He doesn’t know how to react or what to say next as the story derails. It makes for an interesting 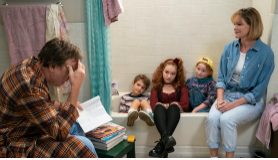 dilemma. He isn’t really Harry but Linda knows herself only as Linda and the same for the kids. Harry also discovers that he cannot leave the set because the only world that exists is the one on this soundstage. This leaves the viewer with a classic Twilight Zone conundrum, the likes seldom seen on ROOM 104.

In the end, you ask yourself, did the gimmick work? You decide.

“Bangs” gave us true BFFs but the gals in this episode, who claim that they are BFFs also, left me in doubt early into the story. It seems we’ve got two hikers who are embarking on a 3-month sojourn over the Appalachian Trail. They’ve already hiked a day and have a last layover in Room 104 before continuing on. It is the last chance for a soft bed and a warm bath before the trek. Megan (Shannon Purser) is in need of a good soak because, as the opening shot reveals, she has a raw, nasty blister on her foot after day one. Casey (Kendra Carelli) is quick yo draw a bath complete with Epsom salts and ends up being a bit shocked when Megan strips in front of her. Casey, though uncomfortable, stresses worry over the blister and is willing to call its quits if Megan can’t go on. But Megan says a decision will be made in the morning whether she should continue the hike. She accepts the bath and has bandages for just such an emergency. 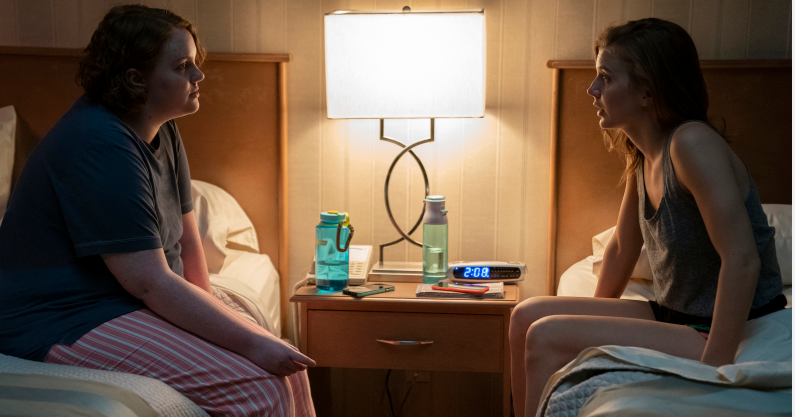 Leaving Megan to the bathroom Casey exits to the main space agitated. You get the impression that she doesn’t really want to do the hike, but was trying to get Megan to be the one to call it off. When Megan is finished in the bathroom Casey tries one more time to steer megan to that conclusion to no avail. Later that night when they are both asleep Megain gets up to head pastt the inner bed to get to the bathroom and trips over Casey’s backpack at the end of the bed and discovers a bag of rocks, the exact kind of rock Megan discovered in her boot and caused the blister. Later still in the night, when it is Casey’s turn for the toilet, Meagan confronts her. Megan actually accuses Casey of putting a rock in her boot and is the cause of the injury.

Casey admits it and with that, we get to the real meat of the episode. A great exchange of words fly enhanced by some camera work & edits to really capture the truth of the matter. 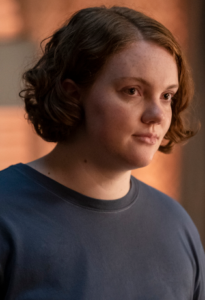 Casey placed the rock because she knew that Megan would not complete the hike because well…she was out of shape and simply fat. Casey did it to give Megan an excuse to offer an easy out of something that was going to be too difficult for her. She goes on defending her stance by saying she had been doing it all along ad well as making sure she was invited to all the cool things because she wasn’t really included. I told you they weren’t solid BFFs.

The coolest bit about all this is just how Megan handles the situation and Casey. Oh, there is a meltdown alright, but (and you do see it coming, but that fact doesn’t ruin it) all is good in the end. In fact, they might just become real BFFs. The last moments make a strong message about body shaming and a strong example of how to overcome it. And to top it off, Megan walks away with just the most perfect last line this episode could have hoped for.

Next post we are privy to one crazy party and a fanatic celebrity fan.