Hey, here we are at the last two installments of the series. ROOM 104 has been a real treat for four seasons, I must say because you never knew what you were going to get. Each and every episode stood out in some way and was a true treat. So, let’s get to it. 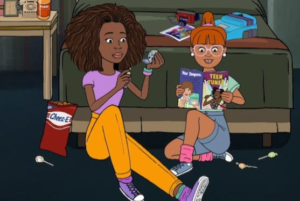 It is perfectly cool and legit to do a totally 2-D animated episode since the show was always loose with its tone and style. There just might be a valid reason to make “Fur” that episode; I’ll touch upon that after plot details. Like many an episode, this piece has two gals ready to party! What singles out Finley (Jordyn Lucas) and Grey (Natasha Perez) as different from all the other females to frequent the room? Well, first they are not tag-alongs with others but a brave duo who doesn’t rent the room, they steal it. We find them hiding under one of the beds, having slipped in while housekeeping was cleaning it. They would likely not have been allowed to rent it anyway, even if they had the money, because of the other big difference. These two are just old enough to enter high school!

That’s the reason for the party. Finley and Grey are best friends about to celebrate the beginning of high school. So, salty snacks, music, magazines and the room to themselves provided it isn’t rented out while they’re there, is on the agenda. The big dynamic between we come to learn between these giggling girls is that Finley (the taller, darker-toned one) has reached puberty, where Grey (the shorter one with red hair) has not. We learn of this not in the way that comes to mind first. Though they make a comment or two about the menstrual cycle, the main indicator of their developmental differences is that Finley is hairier now. She even shows Grey her hairy leg and expresses the need to shave. Thus we, start to understand perhaps why this episode is called “Fur.”

They talk at length about it. Grey can’t wait to get her ‘fur.’ The heck with a swelling bosom and sanitary products she is ready for her pubic hair to come in, as if that is the truly defining feature of maturity. Finley assures her that in time. That discussion is important to have as the story goes on. The girls, brave enough to sneak into the room, are also brave enough to invite a boy over. The studly choice is John Mackie (Jake Green), the school jock. He takes them up on the offer and shows up with a beer in hand, a wink and roaming hands. The girls, at first, vie for his attention, which includes Grey taking a slug of beer herself. Finley’s admonishment of that action sends Grey to the bathroom freeing John to put on the beastly moves on Finley. That causes Finley to put her hackles up, as it were, and defend herself. John doesn’t let up, and Grey comes to the rescue so they can double team the brute. They win the day, of course, and learn a lesson and Grey finally gains her ‘fur.’

Say what? It appears that the hairiness was not just in reference to becoming a pubescent teen but in becoming a full-fledged werewolf as well! Imagine the expense it would have taken in special FX and or CGI to create feminine werewolves for this piece. An animated tale made for a less expensive production, but just as effective in the medium used to get the story told. I guess it means, beware of girls getting their ‘fur.’ Again, an animated story just had to be told and here it is just in time.

I have one big takeaway from this episode and it is not, if you listen to Mark Duplass in his clip, one that the producers of ROOM 104 intended a viewer to have. Oh well, I guess I got a double meaning out of it all. The story offers us the life of one named Keir (Ntare Guma Mbaho Mwine). He is living in a version of Room 104 that gives us, at first, the sense that we are in the future. The room is equipped with an AI device, not unlike Siri or Alexa. The assistant app is Agnes (Rebecca Hazlewood) and it is aiding Keir in preparation for a ceremony. It is always prompting him for plenty of rest, but he wants to practice his speech instead. He is a bit adversarial with the device. Keir has many questions about his life, the pending ceremony and his existence in, of all places, a simple motel room.

Through a series of flashbacks, we discover a younger Keir watching his mother go through the same ritual he is about to participate in. Again, we witness in more flashbacks his wife going through the same thing. Through all this, we learn of Keir’s life, though not necessarily his purpose and the meaning of the ceremony all must face at some point. All generations face it. It is finally revealed, once the familiar window to the room allows one to really look outside, that the room is actually part of a spaceship on a long journey. Accommodations only allow so many onboard and so decisions have to be made as families live their lives on the ship. The meaning of that ceremony becomes quite clear all of a sudden upon this reveal and Keir is next.

With that, I’ll offer the Duplass clip that sets up the themes of the episode.

Sadly, for me, I didn’t get all those connections that Duplass pointed out, but upon seeing the clip could then reflect back on the episode and have it all perfectly fall into place. I did get, however, Keir’s purpose. It is something we see Keir struggle with daily and I understood once the ‘mission’ came to light that Keir was just, to use Duplass’ words, a ‘stepping stone’ so that the next generation could get to the final destination. Each and every person has to internalize all that. Keir’s mother & wife both did, but Keir had a harder time at it. It was quite interesting to witness in this final episode.

That leads to the unexpected takeaway I mentioned at the top. It is one fact that makes “Generations” the perfect episode to conclude the series with. I have always seen room 104 as almost a character in the series all along. And as I have mentioned before sometimes it has served as a passive vessel that allowed those who entered it to incubate a much-needed epiphany, such as this season’s “Avalanche”. Other times it was a more active presence toying with its inhabitants, like in this season’s “Bangs.” The room has caused many an emotion to stir, both positive and negative ones. But in 48 episodes of this series never have I looked upon Room 104 as I have done in this episode. 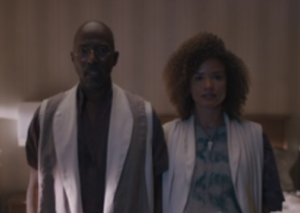 In “Generations” Keir asks why, out of all the possible scenarios, does their quarters look like a simple little motel room from Earth? Agnes just responds back with the statement that it was the best viable option. His daughter Imoko (Kristina Hanna) does come up with a good rationale. She says that it is perhaps because a motel room always offered a clean, safe haven to the weary traveler. And so, it offered a sense of comfort; even for space-faring travelers, that sense of comfort is extended. Well, knock me down! At of all the emotions generated about room 104 over four seasons I never got a sense of comfort from it. I got anger, fear, stress, trepidation, danger, insecurity, desperation and despair, but never comfort. Not until the last episode. Thank you, ROOM 104 for that unexpected emotion as a sweet parting gift.

Also, thanks for the four interesting seasons. I’ll be leery whenever I stay in a room 104 from now on. In fact, in closing, I’ll say I did stay in a room 104 a few weeks ago and I was given a safe, warm, clean room that, what do you know, gave me a sense of comfort. Huh, funny how that worked out. 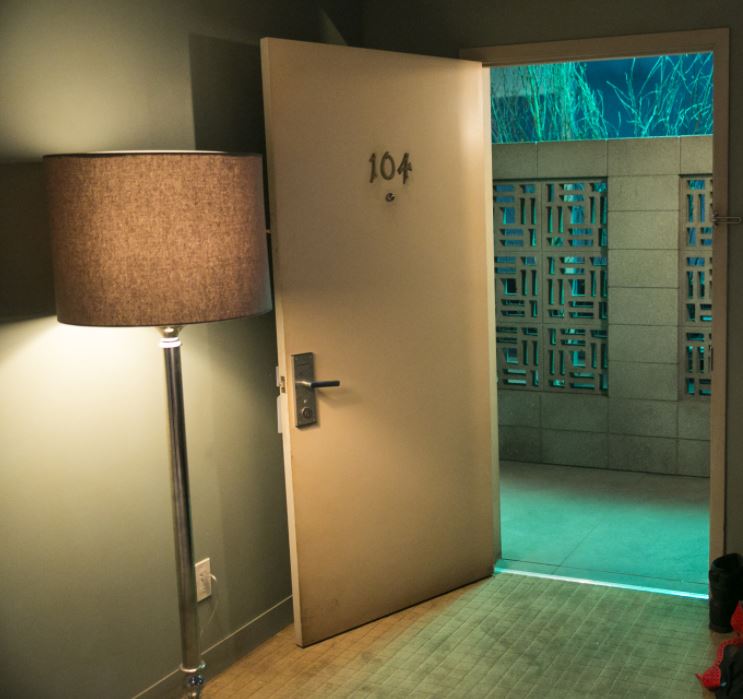