Two more episodes of ROOM 104 here as we approach the end of the season soon. Let’s open the door and get inside, shall we?

Left alone by her bickering parents, a bored teen girl makes a series of prank calls, until one tests her brazen alter-ego. 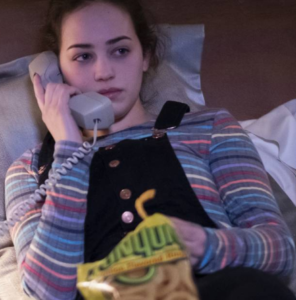 Oh, come on, this is a no-brainer; do not make prank calls on the room 104 phone. Sheesh, that just spells disaster, right? The thing is we just don’t know what the consequences of those actions can necessarily be on a show like this one. And you won’t know the final consequences still by the time we’re done here because I won’t reveal it. I want you to watch it for yourself after all. As usual, I will give you the set up to the ending and some other brief thoughts.

Our lead character, the one responsible for the prank calls, is a multi-layered individual, but due to the short time we have for the story we just don’t get enough of who she is and what makes her the way she is and that’s a shame. Our prank caller is Adrienne, who loves her Funyuns but isn’t loved by her bickering parents. She is played by Mary Mouser and she holds up her role well enough. As we enter the story Adrienne sits on the floor of the room listening to her parents sniping back and forth. The two of them, are on about an important meeting they need to get out the door for. Evidently, they had to haul their daughter along to what is this out-of-town meeting for them. They’re bickering as to whether Dad complimenting Mum’s “big old tits in that dress” is insinuating that she should use them to get the advantage in their meeting. Dad then claims that Mum uses those tits to get what she wants, all the time, especially when he’s not around, so why not in this situation too. And on that note, they leave without saying anything to Adrienne or even acknowledging her.

The bored neglected young lady decides to pull some prank calls to kill the time and distract her perhaps from the woes she has. You get the impression here that the prank calling is nothing new to her as she randomly dials a couple of numbers. It seems the prank won’t really be effective though until she finds the right kind of person on the other end of the line to toy with. She has to build herself up to get to the place she wants to be in flirting with the caller on the line. She psyched herself up before placing the call by dressing in a red dress of her mother’s and lipstick and awkwardly attempting to talk seductively into the mirror. She works herself up the best she can to be a sexy, big-titted lady like her Mom. And then she randomly calls George (Macon Blair). 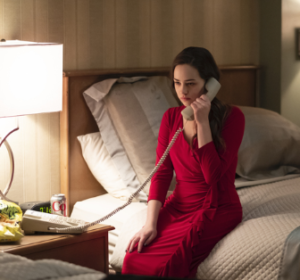 George does not hang up the line but lets Adrienne toy with him. She does her best to seduce him, but is surprised that the conversation was going as far as it did; She didn’t expect that to happen. If you listen though George isn’t being perverse with her. It doesn’t escalate into phone sex, but she ends up disgusted and ends the call. She is a conflicted child for sure in wanting a connection with someone, wanting to be an adult, handling it the only way she has seen her mother do it, perhaps, and not being satisfied in any way.

Then we start to approach the exciting turn that ROOM 104 episodes take. George tracks her down to room 104 and confronts her. He first appears as a violent sort who wants to carry out the escapade they talked on the phone about, but then he confesses that he is a church youth counselor wanting to reach out and help this troubled girl. But then he wants an apology for her behavior. Unexperienced Adrienne, trapped in the room with him, only has one mechanism as her disposal and continues the prank call in person big tits and all. Is pushing the behavior going to get Adrienne out of the predicament? You’ll have to watch and see, but of course, regardless of the outcome, it will be in ROOM 104 fashion.

This is a typical ROOM 104 episode. They only have a half-hour to give you the story and so they cram so much into body language and specific visuals to gather up some sort of character and backstory that the viewer ends up craving more. “Prank Call” was a good episode, but I craved more detail than there was time for.

Two stars of a 1970’s horror show talk to a podcaster about the origins of their cult TV program.

Hah! Right from the start, this episode strikes a tone. The ROOM 104 theme has been tweaked to sound like an old-time horror show and the opening visual carries on the theme nicely. We realize we are looking at old footage of a horror show called Night Shift, so we are privy to behind-the-scenes footage from that 1970’s show being relieved by Ted (Josh Fadem) in the present. He is rehashing what is now a cult favorite with a podcaster, Nina (Marielle Scott) who has set up her kit in Room 104. It is night and they sit in the darkened room at the table in front of the window talking about the show. She is into it but Ted, not so much. He seems quite apprehensive about reflecting back on Night Shift and the soundtrack of the episode plays along each step of the way. 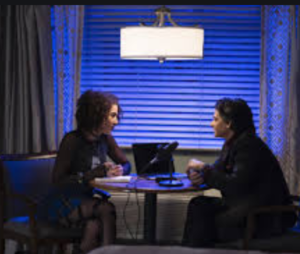 The names & images in the past are causing agita in Ted, but why? He even excuses himself to the bathroom to escape it all. Something is amiss for he is in the bathroom touching up his makeup and regluing eyebrows, but, wait, he is doing a podcast, so why the makeup? What is he hiding? Nina had mentioned that she thought he’d look older? Yeah, if you do the math, he should be pushing 70 and he doesn’t look it. So, the episode will be spent figuring just what is up with Ted.

There are clues leading us into a specific direction but ROOM 104 wouldn’t make it this easy would it? Hmm, the darkened room is his preference, he didn’t appear in the vanity mirror when he dashed to the bathroom, during his absence Nina noted the covered mirror beside the room door and when he reappears, he wants a glass of “strong” blood-red 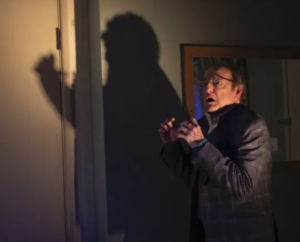 wine. Plus, there is that youthful look…hmm? Just when he seems to be mesmerizing her there is a knock at the door.

Entering the scene is elderly Robert (David Paymer), Ted’s partner from back in the day. They are estranged which was the reason for Night Shift’s demise. That is also the topic of Nina’s next line of questioning and the reason she called Robert to attend the session. It is revealed in a heated argument in front of Nina that the reason was one of jealousy. Both young Ted & Robert were in love with Camille.  We learn that Camille fell for Ted. Robert felt left out and also vied for Camille’s attention. She then was enamored for Robert but he got cold feet. Ted was willing to sacrifice himself in the name of love and arranged to be bitten by Camille who was a vampire. Yeah, it sounds like an awful lot but the explanation played out very well.

This causes Ted to literally reveal his true self. He damned his life to be with Camille to be rejected for Robert instead. Robert didn’t pursue the opportunity and the relationships and the show was doomed with Ted carrying the brunt of it into immortality. Rober had come prepared, however. Anticipating that the reunion and the resurfacing of the old wounds would not bode well he brought a wooden mallet & stake along. As the argument turns physical Robert urges Nina to use the implements. Of course, things do not turn out the way as planned. Nina gets away, but Ted & Robert are left in the room with one of them sustaining mortal injuries. Did Ted pummel Robert? Did Ted get a stake to the heart?

To find out watch the episode and to find out how Season Three of ROOM 104 concludes stay tuned for the final post of the season.