The final season of this anthology series is going by far to fast. Only for more episodes to go. I’m sure they carefully picked out episodes took the final slots. Get ready to be surprised by the entries we look at here. Let’s get into the thick of it, shall we? 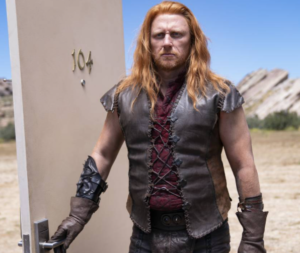 This episode raises the question of “who is the last man standing.” Now in four seasons of this show, there have been some full-on, dragged-out fights (including kickboxing) but nothing quite like this one. We don’t even start in the room and we scratch our heads for the first half of the piece wondering what this has to do with room 104 at all. But it all falls into place eventually.

The episode begins with looking at the closed room door from the outside and we think someone is about the enter room 104 but as the door opens the interior is not what we see at all. We see a rock canyon and arid scrubland instead. Walking over the threshold is Kyran garbed as an ancient warrior or barbarian perhaps. He is waiting for his mortal enemy Durkon to arrive so that they can once again do battle. As Kyran (Kevin McKidd) awaits him Kyran…bursts into song.

Yep, this is a musical episode, of which there has been a few as well, but there was no indication that this was one of them. Hell, I didn’t even know McKidd could sing and he does so here in the theatrical Broadway style. His nemesis (Desean Terry) arrives in a bolt of light and a battle ensues with clashing swords complete with pivots, thrusts, dodges and parries as they…burst into song. They are each waiting for one false move. But what does this have to do with a motel room? Apparently, they have been battling for eons and know each other’s moves. How can I ever get a stronghold over the other? But then, Kyran is down, about to be bested. That is until another Granada (Suzanne Nichols) arrives. She is Kyran’s mentor. She is training him to win and a montage of training ensues from which he learns a valuable lesson and so he…bursts into song. 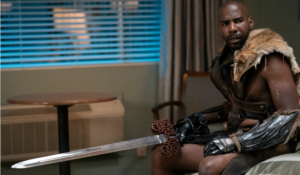 132,478 years later he crash lands into room 104. It is then that the story starts to piece together. Kyran & Durkon are time travelers. Their battles take place at the same physical coordinates every time but at different points along the timeline. They have battled it out over the eons and the same longitude and latitude as room 104 and were destined to battle in the infamous motel room sooner or later. As Kyran waits for Durkon to once again appear he grows weary that it will never end and is ready to run himself through to stop it all, but first he must…burst into song.

Finally, Durkon arrives and the battle ensues in the room. As they clash, they have a heart to heart as Dukon is dismayed that Kyran would just give up. They stop short to notice Granada there with them as they run each other through with their swords. How could this be? Because Granada also gave Durkon the same advice she gave Kyran – you won’t win with brain & brawn but with heart & soul. And with that revelation they…burst into song.

Now, I know I gave away some spoilers there perhaps, but what I can’t reveal is the gist of these tunes that energize the piece nor can I say who ends up being the last man. It is indeed an epic half-hour ROOM 104 episode not to be missed.

The biggest question from the get-go is, who is Babby? We will surely learn as childhood friends reunite for the first time in decades in that simple little, innocent-looking Room 104. 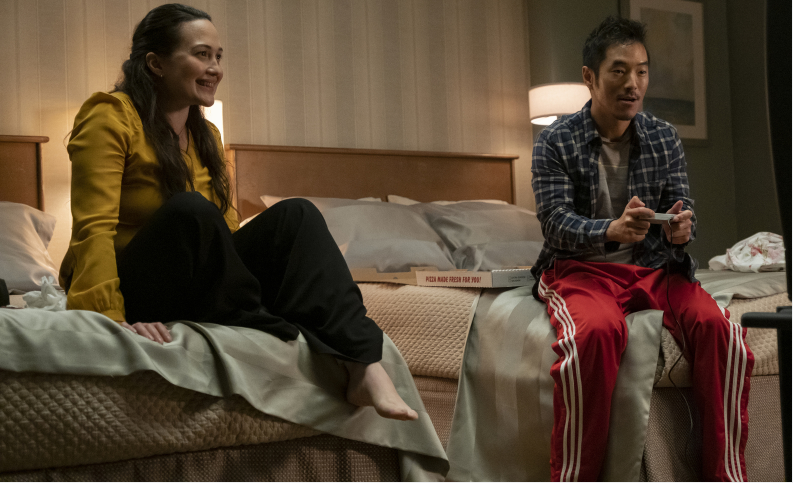 Bruce (Leonardo Nam, WESTWORLD’s Felix Lutz) makes arrangements for Abby (Lily Gladstone) and him to meet and rekindle and old childhood friendship. The episode starts with her hesitantly knocking on the room door totally expecting him to be ready to catch up on old times at a restaurant as they planned. But Bruce has other ideas. As she comes in, he wheels up with an old TV connected to an old 8-bit game system and boots up Crowning Glory II. That does cause her to register a bemused look as she acknowledges the old game they used to play. And this game seems very much a character in the story as we see many a screenshot of the simple game from back in the day. As the simple script scrolls with the simple images Bruce reads along. 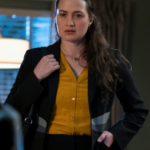 He is a bit dismayed at Abby’s reaction. Obviously, the game means much more to him. He reminds him that this not just a game but the actual cartridge in which they created the character Babby (Bruce + Abby). She’d solve the puzzles and he would fight the bosses. Okay, hold up. Look at the title of this episode again. So, this is not good. We can deduce that perhaps he is bitter that, what, that their relationship died when the game character died? Bruce is out for revenge, redemption or a second chance? No, that’s not it. Well, what do you know? What he wants is to bring Babby alive again. You see, in the game, you are given only one life and must beat the game with just that one life. Back then they couldn’t beat it, but years later the internet reveals a change to revitalize your one life and resume the game. Babby can be restored from her 8-bit demise because Bruce has the plan to follow the secret levels to do it, with Abby’s help of course. Thus, Abbruce (Abby + Bruce) is created. 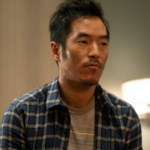 Abby shuts him down and says she isn’t game and again he gets addled. As they begin to play Abby is uncomfortable because Bruce is far too obsessed over his quest. He lightens up as they reminisce about the silly things they did in their younger days and she comes around. They really were a fun pair. And with that, there is nothing left to do but – Game On! In time they are actually having fun. So happy about that because it could have turned so ugly…and still might. But for a moment they have bonded again. Yea, just a moment as things flair up again. Abby while probing Bruce about his life gets Abbruce killed and he flips. This time, though we start to get to the core of what the story is about. They each accuse each other of killing Babby because they dared to play the game without each other and the whole thing is because of what else happened that night. You knew it had to be something more to it, right?

The next post offers up “Fur” and “Generations”, the final two episodes of ROOM 104.