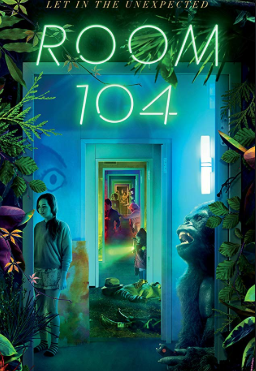 Here we go for another two episodes. One offers a manic little monologue and the other one offers the truly unexpected.

On the advice of his doctor, a man with a chronic skin ailment sequesters himself in hopes that he might finally be cured.

Hey, this is the cursed room 104, what is the chance this dude is going to be cured? Or, giving him the benefit of the doubt, perhaps he could be cured, but at what cost? Into the room comes a solid little live wire in Craig and he is sporting an all-body rash. We know this because he is filming his little layover in the room as per his doctor’s suggestion. Most of what we see is via a tablet device that Craig uses to record messages to his doctor. So, what we witness is an energetic and itchy monologue from Craig as he chatters about his progress, the treatments and his hopes for success in beating the affliction that is driving him nuts.

One of his treatments is soaking in a mild bleach bath and we see him go through that and get to see up close just how nasty this rash appears to be. At one point he has a brief conversation with his mother via the tablet to try to understand what happened to 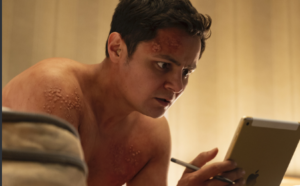 him as a youth to bring on the rash. She was of little help but did mention an incident where Craig was missing for a few hours as a kid. He wandered back no worse for wear.

Well, that conversation and that blanked memory start him to ponder. As the rash eats at his skin the quandary of what happened to him eats at his mind. At one point he swears he was abducted by aliens, but he dismisses it at first because therapy has cut away nonsense like this, right?

As his stint in the room goes on the rash gets redder and rawer and starts to bubble. A subtle effect but quite effective. It makes the viewer want to scratch. In the morning, after an irritable night, Craig opens the door to discover Dr. Blake. He was actually watching Craig’s sent videos and has come to give him a treatment that will end Craig’s suffering. The injected treatment seems simple enough and Craig will get a big bang out of the results. But the question remains, is he cured and at what cost?

Arturo Castro, (Broad City, Billy Lynn’s Long Halftime Walk) gives us his portrayal of Craig that holds us for the bulk of the episode. And, though the ending is not the most original plot device out there it still surprises you. Wait for it….and BAM!

After running away from home, a teen girl seeks safety in Room 104, where she encounters a woman who offers a glimmer of hope for the future.

The youngster held up in the room is Zohara (Iyana Halley) and the room she resides in is nothing like we have seen it be before. It is a ramshackle mess to be sure; like the homeless have collected a shit load of junk up in there. Has Zohara done this? How did she come to treat Room 104 this way?

It is not until a lady named Maria (Catalina Sandino Moreno) arrives that we get a sense of what is going on. Both women are stumbling around with flashlights and Maria comes into the room scavenging for materials. It turns out that it is not the middle of the night, but the middle of the day and the sun is not in the sky! 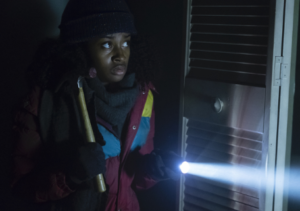 Using cans of Hormel Chili as a visual aid Maria explains to Zohara that the Earth has been bumped out of the Sun’s orbit becoming a rogue planet.

Ah, we have got a Sci-Fi tale and/or an apocalyptic story on our hands? That’s unique for ROOM 104. We will disregard the scientific facts of being tipped out of orbit to focus on the character’s story here, but it is cool to note that we’ve had the room’s origin story and now we may get its demise? I’m in!

The story of these gals is certainly one to listen to. Maria is pregnant and she is cobbling together to make an incubator to keep the baby healthy once it is born. She is behind in getting to an underground bunker where she can safely have the baby. She has kept a journal which she shows Zohara explaining the whole plan. She also reveals that she is psychic and has predicted the end of the world would happen just the way it is. At this point, we can only surmise that this episode is about who or maybe, what Maria really is? 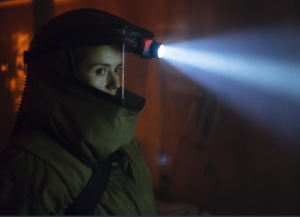 Zohara naturally wants to go along, but Maria refuses to take her. That is until Zohara spills her story. It seems Zohara’s father, named Willis (James Babson), was crazed and she had to flee for her safety. The girls bond over this and they move on with the plan to make the incubator and hightail it to the bunker. But here is about nine minutes to go in the episode, so what next?  Willis shows up!

This episode leaves you wondering many things and that is okay. Being just 29 minutes long there is not a chance to flesh every little thing you want to know about the world and about Zohara & Maria but as the simple description states there is ‘a glimmer of hope for the future.’ Rogue.