HBOWatch is testing out a new writer and this is his second test post. So give due attention to the words of Connor Buhagiar. 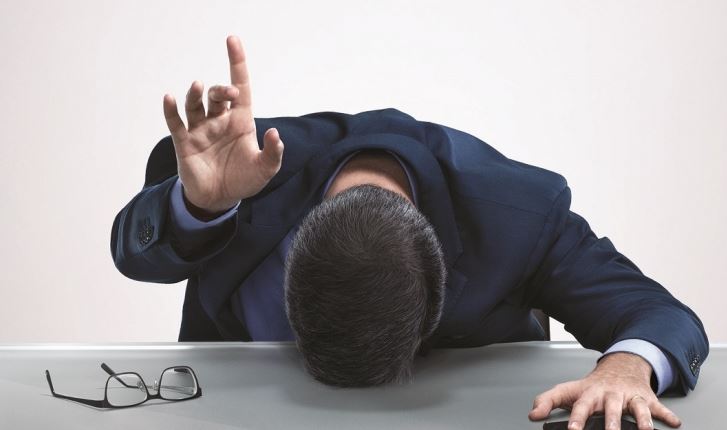 John Oliver, you radiant house elf, thank you so much for coming back. I hate you for taking even a nanosecond off during such heady times. With your return, I finally know how to feel while I try to sound smart around the office water cooler, because in thirty minutes of airtime you’ll tell me how, dammit. If you missed it Last Week Tonight With John Oliver debuted this past Sunday, February 18 and he’s pissed.

But you wouldn’t know it to look at him. Somehow, our ersatz tribunus populi handles the current dumpster fire of the United States’s political climate with a deft flick of the wrist. He begins by addressing the latest in a long line of despicable school shootings: this past week’s tragedy in Parkland, FL. But this time, something remarkable has happened. The students of the affected school started a “We Call B.S.” campaign, shouting down the (putative) adults in the room and urging everyone in the U.S. to finally give a shit about our country’s twice-quarterly gun massacres. They’re marching to the state capital in Tallahassee on Tuesday to show they’re serious. Depressingly, this is just a blip on the radar, and it’s also Olivia’s opening salvo.

In past seasons, Oliver had explored topics ranging from civil forfeiture to FIFA’s slave labor – their only unifying feature is that they are absolutely caked in the officious bullshit Olestra sniffs out like a bloodhound, and here he once again proves his sense of smell doesn’t stop at the U.S. border. He breezily addresses no fewer than three world leaders facing heady political scandal. The internationalist paean at the resignation of South Africa’s President Jacob Zuma, the imbroglio of the philandering Australian Deputy Prime Minister Barnaby Joyce, and the embezzlement of Israeli Prime Minister Bibi Netanyahu might, in another, saner alternate reality, have served as an absurdist political comedy of Monty Python caliber. Instead, because this is 2018, they’re just Oliver’s batting practice swings.

And, boy howdy, does he deliver a deep jack to right-center field. The centerpiece of any Last Week Tonight episode is the long-form essay of the week – you know, that thing you guiltily watch in your work cubicle on Monday morning while you wait for the coffee to kick in? This one delves, mostly through a compilation of his own stupid statements, into the pants-on-head idiocy of No. 45. The segment is titled “Trump vs. The World,” and Jonathan manages to manage Very Serious Things – the lack of ambassadorial appointments to key countries, e.g. South Korea; his lack of expressed military support for NATO member states; and lest we forget, his condemnation of the entire continent of Africa, Haiti, and El Salvador as “shithole countries” – mildly laughable. 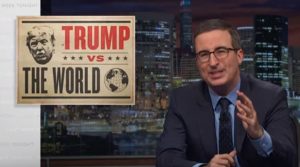 How? By showing the viewers at home what a laughingstock our country has become across the globe, that’s how. What Oliver describes as a “cottage industry” of Trump ridicule has caught fire from NATO to the Warsaw Pact. There’s a South Korean Trump in a stupid orange pompadour mugging Trump’s stupid face, an Italian Trump in a stupid F-117A replica aping his stupid hawkishness, and a Russian Trump pretending to answer a stupid phone call from stupid Vladimir Putin in front of the real Vladimir Putin himself. This is what we are right now, folks. We deserve this.

Nor does the devolution of worldwide American diplomacy stop there: of the ambassadorial appointments Trump has made, they are of the Steve Bannon school of diplomacy. Pete Hoekstra, Trump’s ambassador to the Netherlands, insists to a reporter until he’s blue in the face that he’s never said anything about “no-go” zones or politicians being set on fire, citing “fake news”…and is then, of course, saying exactly those things during a debate. Oliver’s best blow here isn’t a jab, it’s a knockout left hook: he hits his criticism of Trump by twice comparing U.S. soft power to an act of national “branding”, as though the country were an AirBnB in midtown Manhattan, not an idea. It’s a little too capitalist for this comrade, but it plays because Trump is an alleged businessman and, to extend Oliver’s metaphor, he has no regional, district, or assistant managers to run his company, of which he is the CEO – but he has a leaden, not golden, parachute.

The comic relief from “Trump vs. The World” is brief but oh so sweet: sixty seconds of Shit Shaped Like Hearts. How did you spend Valentine’s Day? (Personally, I took a bath accompanied by a sleeve of peanut butter M&Ms and a bag of pepperoni pizza rolls.) But alas, brethren, had we known the extent of our options we could have enjoyed a heart-shaped meatloaf slathered in mashed potatoes, because nothing says sex and romance on the biggest date night of the year like Oh God, I Can’t Believe I Ate That, Find the Gas-X if You Really Want to Do This. There are also, apparently, porterhouses cut into hearts which bear a disquieting resemblance to the face-huggers in Alien, heart-shaped bagels, heart-shaped pizzas, and heart-shaped boxes of tacos, which, despite the name, is not a sex act in an Amsterdam red light district.

Oliver, you’ve squeezed a lot into this debut, and I low-key hate your bespectacled ass for not taking more time to hero-worship Bobby Three Sticks and his succulent indictment of thirteen Russians and one American. But I understand, you’re looking at the horizon and seeing the big fish a-comin’ – Trump’s eventual destruction of the United States’s international prestige, the likely impeachment of the same come midterm elections, and the lurking specter of Papa Vladimir, smiling enigmatically at the hydra he’s created. And you’re just coolly rolling up your sleeves. B

Join in every Sunday night at 1100pm for Season Five of Last Week Tonight with John Oliver.