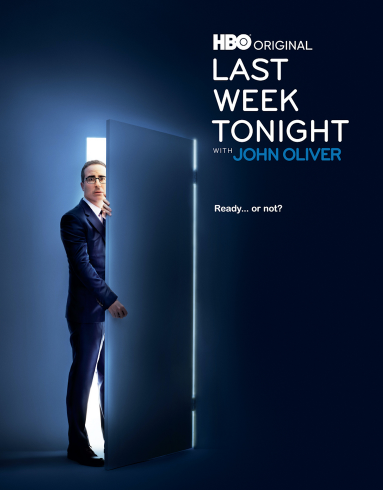 Season 8 of John Oliver’s award-winning gig returns this Sunday night at 11:00pm ET. Since his Holiday break, a lot went down including the person residing in the White House, the Capitol Raid, RobinHood and more. When Oliver returns, he will have to perhaps catch up on what he missed commenting on, perhaps put the President Trump jokes to rest, perhaps ramp up on fresh President Biden jokes and continue to wittingly balance serious topics with well-timed drops of humor.

A go-to site of ours, Deadline, had a little chat with him lately so, as a lead-in to the season premiere we give you some excerpts:

DEADLINE: During the pandemic, many talk shows have found a safe way to return to record in-studio while some are staying virtual. Can we expect Last Week Tonight to be back in studio or will you remain in the white void?

JOHN OLIVER: Oh, we’re going to be in the void because of the f*cking thing!

OLIVER: I mean, each studio and circumstance is different, right? For us, I think it would have been great to be back in a studio, but I don’t think we feel like we can do that yet. So we’ll be in the void for who knows how long? Well, I guess until they can roll out the f*cking vaccine!

DEADLINE: At this point, it would be weird to see you in the studio again after being in the void for the past year.

OLIVER: I haven’t seen my staff for a year! There are people who work for me now who I’ve never met! I think we were going to probably be practicing relatively 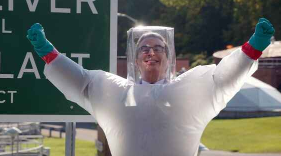 extreme caution for a whole bunch of reasons. One, we’re in the position where it feels like we can do that and still have everyone paid. Also, a bunch of our staff got sick at the start of the pandemic, which I think also kind of means that I think intuitively, we are going to be extremely cautious.

DEADLINE: Last Week Tonight has a clever tongue-in-cheek and hilarious approach to reporting the news with the amount of exhausting dire news and Trumpian trash that came out on a daily basis last season, did you find it difficult to shift the tone while continuing that Last Week Tonight-branded humor?

OLIVER: Really good question, because generally, our show’s M.O. is to kind of take the poison of what’s going on in the world and trying to synthesize that into comedy. But at the start of the pandemic in particular, where, all of a sudden, we’re not only not in our studio, but we’re having to do this ridiculous at-home set that we’d put together quickly. And I’m actively worried about staff members who were sick.

The thing that’s really affecting it is watching the death count go up, and you start to think, “Well, hold on, what can you do as the death count is climbing? What can you do, and what feels remotely appropriate?” I especially felt that because it seems like the most joyous parts of our show are the stupidest parts. You think, “Well, at what point is a really stupid joke starting to fiddle while Rome burns?” I was a little bit worried very early on for what tonally feels like it is remotely appropriate right now and the weird revelation was that stupid rat erotica. 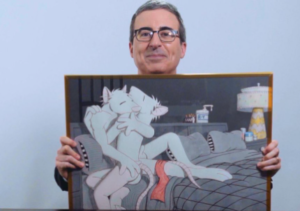 DEADLINE: Now that the country has a new president and 2020 is behind us, the bar is pretty low in terms of what we can be happy about.

DEADLINE: How has the past year changed the way Last Week Tonight has reported and handled news and how do you think that will carry over into this new season with this new administration? 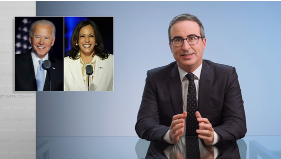 OLIVER: It’s tricky. I mean, it’s going to be great to be making the show without Trump being president because he had a deep desire to be the focus of any moment and certainly of any story, which was often unhelpful because with systemic problems. He is not the most important part of that, right?

He’s just sometimes the apex of the problem, and so with him gone, the problem remains, obviously. So it’s going to be exciting to work on stories where you are not having to constantly deal with someone trying to draw focus all the time.

DEADLINE: At least Adam Driver made you happy.

OLIVER: It’s weird talking about it now. The thing that was really, meaningfully reassuring was realizing that we could do dumb jokes again — and dumb jokes are our favorite thing. So if there was a dumb joke that someone could add to and have it come back like the mayor of a town in Connecticut coming up with the idea for a memorial sewer plant, it was really helpful in reminding me that my favorite thing, which is dumb jokes could still exist in a world that was mishandling a pandemic.

So, with that, we are ready to unpack another season of dumb jokes and the ‘white void’. Again, that is LAST WEEK TONIGHT Sunday nights at 11:00 ET and on HBO’s streaming sites.