The talking heads of HBO are about to launch new seasons of their respective shows starting with Bill Maher and Bomani Jones, then Bryant Gumbel is back a few days later followed by John Oliver next month. Chris Wallace has already started a new season of WHO’S TALKING WITH CHRIS WALLACE on HBO Max earlier this year. Here are details gleaned from official press releases regarding: 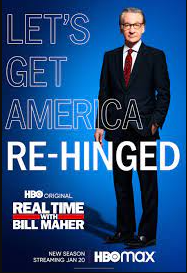 The show will return for its 21st season on FRIDAY, JANUARY 20 (10:00-11:00 p.m. ET/7:00-8:00 p.m. PT). Allowing Maher to offer his unique perspective on contemporary issues, the show continues with its opening monologue, one-on-one interviews with notable guests, roundtable discussions with panelists, and its signature “New Rules.” The series airs on HBO and is available to stream on HBO Max.

As is the custom with this show, guests are always announced just a day or so earlier than its broadcast. So, we know the guest list for the season premiere. This week features a one-on-one interview with William Barr, former Attorney General under Presidents George H. W. Bush and Donald Trump, and author of the New York Times bestselling book is “One Damn Thing After Another: Memoirs of An Attorney General.”

What is not made clear is the top driving topics for the week. But whatever they are Bill Maher always manages to get people talking.

I personally would rather have seen Bomani Jones appear on BACK ON THE RECORD WITH BOB COSTAS for another season, but Costas’ show has been canceled. But Bomani gets to see his own show move into a sophomore season so, good for him.

This HBO Original late-night series returns for its second season FRIDAY, JANUARY 20 (11:00-11:30 p.m. ET/PT). New episodes will debut on subsequent Fridays on HBO and will be available to stream on HBO Max. Jones shares his satirical takes on the intersection of sports and culture through topical monologues, sketches, and deep dives. Jones has been regarded by GQ as a “star with something to say” and “the most insightful sports commentator on television.” He has an opportunity to say what is on his mind right after Bill Maher.

Topics and guests: The season debut will feature topical commentary on this week’s most-talked-about issues in sports, a one-on-one interview with FS1 host Nick Wright, and a deep dive on player empowerment in sports.

Gumbel and company will return for its 29th season on TUESDAY, JANUARY 24 (10:00-11:00 p.m. ET/PT). Winner of 36 sports Emmy Awards, the new season will debut on HBO and be available to stream on HBO Max. For up-to-the-minute updates about REAL SPORTS WITH BRYANT GUMBEL, follow on Twitter at @RealSportsHBO or join the conversation using #RealSports, and on HBO.com/realsports and Facebook.com/RealSportsHBO. I really should find the time to watch more often. 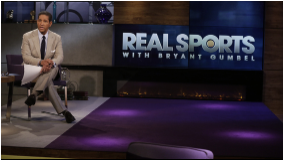 Coming up, Favre Welfare Scandal: REAL SPORTS examines the role Hall of Famer Brett Favre is alleged to have played in redirecting millions of dollars away from the poorest residents in the country’s poorest state to his own projects. David Scott reports. Producer: Max Gershberg

Sudden Cardiac Arrest In Young Athletes: When Damar Hamlin collapsed on Monday Night Football, it was a shocking event that stunned audiences on national television. The sight of a healthy young athlete going into sudden cardiac arrest was hard for most people to comprehend. Yet, sudden cardiac arrest happens more than 100 times per year to high school athletes around the country. Since only 16 states mandate automated external defibrillators (AEDs) at high school sporting events, the result of these occurrences is often tragic. Soledad O’Brien reports. Producer: Nick Dolin

This Emmy-hogging show returns for its tenth season SUNDAY, FEBRUARY 19 at 11:00 p.m. ET. The series airs on HBO and is available to stream on HBO Max. Comedian, actor, and writer John Oliver returns for a brand-new tenth season of his acclaimed half-hour series LAST WEEK TONIGHT WITH JOHN OLIVER. A satirical, insightful, and meticulously researched look at current events in the U.S. and around the globe, the weekly series features Oliver’s hilarious, expertly honed perspective on today’s pressing political, social, and cultural issues, as well as lesser-reported topics that both inform and entertain. Shot in New York, season ten features the show’s weekly topical insights, signature deep dives, and distinctive comedy pieces.

This show never announces its top topic of the week and doesn’t have panel guests to announce so it is always a crapshoot to see what top stories are going to get skewered by Oliver in any given installment. But, at this point, you can pretty well guess that it will be award-winning.

While we are at it, since we already mentioned it, WHO’s TALKING WITH CHRIS WALLACE is six interviews into its second season. You can find half-hour chats with James Cameron, Hugh Jackman, Andy Cohen, Ina Garten, Nancy Pelosi, and Idina Menzel so far.

Who is your favorite talking head at HBO and why? Let us know in the Comments below.